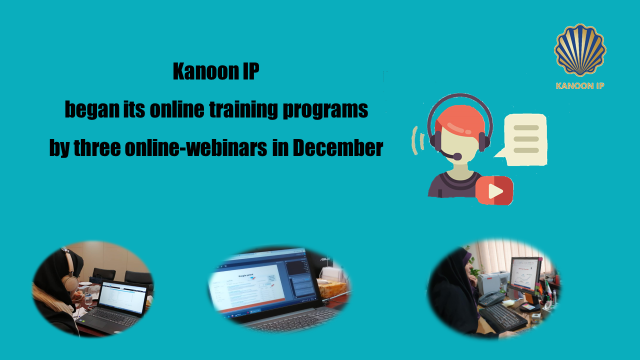 kanoon IP Association held three online webinars in December with the aim of improving the IP capacity throughout the country.

These initial online webinars were designed based on the demand of Kanoon IP audiences and were held under two topics titled “fundamentals of intellectual property” and “introduction to patent searching”.

To facilitate access of audiences and enthusiasts across the country and decentralize mere education in Tehran and other big cities, Kanoon IP has designed several online learning programs. To this end, the first opening training programs, as part of the Kanoon IP Fall calendar, were held as online webinars on December 3, 10 and 17.

These webinars were parts of a series of webinars designed to give the audiences an understanding of intellectual property and how its protection can be a key to any business. People could take part in the webinars at their convenience from anywhere in the country or even outside the country, where access to the internet is possible.

The first online webinar titled “fundamentals of intellectual property”, was held on December 3. Mrs. Mitra Aminlou, one of the honored Kanoon IP lecturers and consultants, introduced various areas of Intellectual Property in this webinar to help the participants to understand which areas may apply to them. Four main areas were covered in that webinar, including, patents; trademarks; registered designs; and copyright. At the end of the webinar, questions of participants were replied and more references were introduced

The second topic which was covered as the online webinar was “introduction to patent searching”, and it was held in two sessions on December 10 and 17, lectured by Mrs. Leyla Zareyee, another honored Kanoon IP lecturer. In the first session aims of patent searching, patent search strategies, patent classification codes (IPC and CPC), applying the classifications code, and how to get the best search results based on needs and queries were presented.

In the second session of the “introduction of patent searching” online webinar, held on December 17, the “google patents” database as a popular patent database was introduced and the application of its different parts was explained with examples. Then “patent scope” and Espacenet database which is respectively owned by the European patent office (EPO) and the World Intellectual Property Organization (WIP) was fully introduced. To this end, the simple, advanced and field combination search was introduced in these two databases and searches were carried out by using some practical examples.