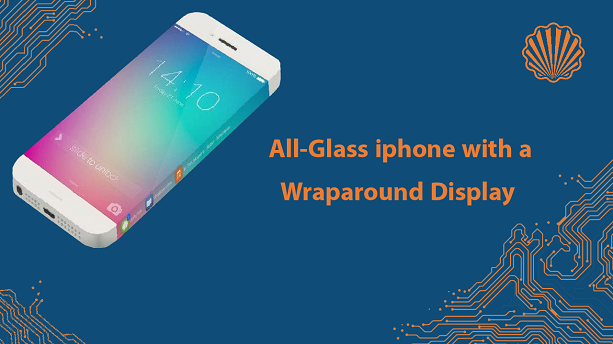 Feb 29, 2020 Appel's Patent on an All-Glass iPhone with a Wraparound Display.

Although large companies as Samsung, LG, Motorola, and Huawei battle it out for foldable phone supremacy, Apple has yet to announce any plans for a foldable phone but perhaps trying to be heading in a different direction for its future iPhones according to its recently published patent.

According to AppleInsider's recent report, the newly published Apple’s patent titled: “Electronic Device with Glass Enclosure, shows off an all-glass iPhone with a wraparound touchscreen, displaying icons and images across the entire face of the device. the new design features a device crafted glass with six surfaces (like a usual iPhone), but instead of the conventional flat display on current-gen iPhones, it will be equipped with a wraparound screen instead.

According to what the patent reveals, on the face of the phone, the standard most used app icons are shown with an image in the background. But the glass backs and glass sides may be transparent, allowing the electronic device to include additional displays that are viewable through the sides and/or the back.

Therefore, it seems the side- and back-viewable displays use the touch- and/or force-sensing systems, effectively turning the side and back surfaces into additional input devices or surfaces with which a user may interact to control the electronic device.

Moreover, from the designs included in the patent, the tactile buttons for controlling the volume have been replaced by what looks to be touch icons. Apple in its patented design is also trying to use the edges of the phone to display information related to the UI. For example, there may be status icons to give you access with a touch to the different airplane modes, rather than Wi-Fi, Bluetooth, and more.

There is still some doubt over the practical production of the device. the filing of this patent does not provide any certainty about the future production of such a smartphone. Also, in 2014, we remember Apple filing a wraparound display patent.

Normally, large companies file patents regularly for all kinds of designs which never come to fruition, so only time will tell if the product in question will ever make it onto the production line.