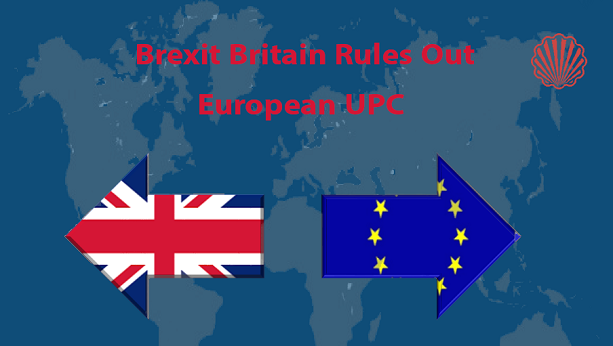 UK’s rejection of the UPC and its consequence

The UK Government has confirmed that the country will not be part of the planned Unified Patent Court (UPC) in the face of an impending Brexit. in fact, according to Brexit, the UK participating in UPC that applies EU law and bound by the CJEU is inconsistent with the UK's aims of becoming an independent self-governing nation.

This represents a reversal of policy, since the UK, ratified the UPC Agreement in April 2018. Although the previous government led by Theresa May committed the UK to UPC membership, the new government under Boris Johnson has made a clear time that it envisages a far looser relationship with the EU post-Brexit.

This change was expected after the government published its approach to negotiations on the future relationship with the EU earlier on February 27. This document explicitly ruled out “any jurisdiction” for the Court of Justice of the EU (CJEU) in the UK.

The CJEU has an important role in the UPC agreement as to the ultimate arbiter of EU law, while Article 20 of the agreement specifically states that the Unified Patent Court “shall apply Union law in its entirety and shall respect its primacy”. Thus, being part of the system would have meant the UK accepting that EU law takes precedence over UK law in UPC-related matters.

But what would be the potential impacts of the UK rules out on UPC and the UK patent system?

The long-awaited introduction of the European patent with unitary effect and the Unified Patent Court (UPC) is the biggest reform in the history of European patent law. Therefore, it supposed that leaving the EU could have substantial impacts on both sides. The UPC system would enable a patentee to enforce its patent across Europe with just one action before the UPC. All decisions taken by the UPC, including injunctions, damages, and decisions on the validity of a patent would have a pan-European effect.

The UK was to play a vital role in this ambitious project, inter alia by hosting a branch of the court with responsibility for life sciences cases in London. The UK’s leaving means that the central division of the court, that had been allocated to London, will have to be moved. Many in the European patent community speculate that the pharmaceutical division will relocate to Milan. Indeed, the Italian government has previously expressed keen interest in more active participation in the project. The Netherlands is also a potential new location for a UPC central division.

Another impact comes for those attorneys who do not have audience rights in an EU member state. They will not be able to represent clients at the court (This does not happen for the UK European patent attorneys with a litigation qualification), Moreover, British judges will not sit on its benches.

However, Some of the UK's  lawyers believe the UK rejection of the UPS, would not have bad impacts on the UK's IP legal system. Tumbridge, one of the UK lawyer observes this as an opportunity to compete. He said: the UK has good judges, good lawyers and an exceptional reputation for handling patent cases. We’re match-fit, and companies will still look at the UK for high-quality judgments on validity and infringement. we can very effectively compete with the UPC.

The most important things may happen is that the entire system will be less attractive to use since the population of 65 million, no longer being a part of it. some practitioners doubt whether the new court would be viable without the participation of UK judges and lawyers.

Alexander Ramsay, head of the UPC Preparatory Committee, who remains hopeful for a fully-functioning court system, said that the Preparatory Committee was aware that something like this could happen. Therefore, the rule out of the UK government does not come as a total surprise. He said that preparations for the UPC will continue to go ahead without the UK. And, even without the UK, the UPC will be quite a powerful alliance of signatory states. According to his speech, the Past surveys show that the UPC will still be to the advantage of the European patent community.