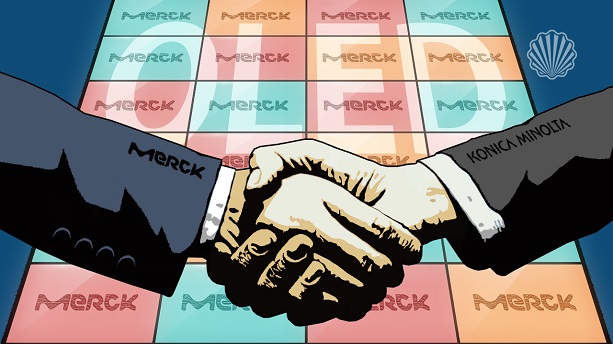 Merck, the German pharmaceuticals, chemicals, and Life Science group,  announced that it acquired the OLED patent portfolio for display applications from Konica Minolta INC, a global technology company that provides innovative solutions to businesses and society.

Merck is one of the leading OLED materials suppliers and this is obvious that the company intends to expand its position as the main supplier of organic material for use in display production.

Konica Minolta, On the other hand, has been researching in the field of organic materials for many years. The company’s focus is on OLED lighting and thin mobile panels and has developed roll-to-roll processes for the production of flexible lighting panels. The Konica Minolta technologies including measuring devices, optical lenses, and print heads, in addition to organic lighting technology, contributed in around 10 percent of the company's net sales in 2018.

It should be noted that Merck, in the past two years, accelerated its efforts in this field and had made several partnerships with other OLED material manufacturers. For instance, a collaboration project with Universal Display concentrated in OLED emitters had already announced.

Since Merck, relies mostly on the cost and material saving printing of organic materials in its developments, had entered into a cooperation with printer specialist Seiko Epson. Some of the OLED patents of the printer manufacturer Konica Minolta could also fit here.

Moreover, other collaboration projects with  Visionox,  and OLEDWorks was announced previously by Merck.

Merck's patents on transparent conductive layers, which are required for the production of flexible luminescent layers, are likely to be of interest.

Merck is one of the few manufacturers that can provide the whole components of an OLED stack including; the emission layer (EM), the two transport layers (ETL: Electron Transport Layer, HTL: Hole Transport Layer), the injection layers for electrons and holes (EIL: Electron Injection Layer, HIL: Hole Injection Layer), and the anode made of transparent conductive oxide.

Merck has already held the leading position In the LCD area, among liquid crystal manufacturers worldwide since many years ago. Merck with focus on special LCD areas with very high demands (from Asian producers) on the liquid crystal, has expanded its expertise in the material for organic displays through its own research capacities, partnerships and the acquisition of patents.