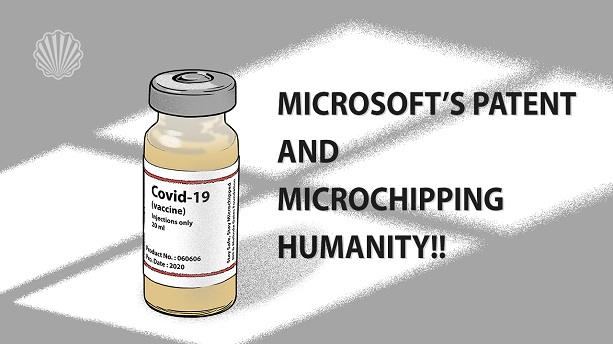 May 11, 2020 Does the Microsoft's Patent Seek to Microchip Humanity?

Microsoft has recently patented a system that uses human biometrics such as body heat and brain-wave activity to mine cryptocurrency!

The patent, filed under international patent number WO-2020-060606, titled ‘Cryptocurrency System Using Body Data Activity’, leverages human body activity as proof-of-work. In the latest Microsoft patent, which was revealed in late February, physical activity and brain waves to mine crypto as a form of the proof-of-work algorithm was claimed.

A proof of work is a piece of data that is difficult (costly, time-consuming) to produce but easy for others to verify and which satisfies certain requirements. Making a proof of work can be a random process with low probability so that a lot of trial and error is required on average until a valid proof of work is generated

According to the patent: "Instead of massive computation work required by some conventional cryptocurrency systems, data generated based on the body activity of the user can be a proof-of-work, and therefore, a user can solve the computationally difficult problem unconsciously”. In fact, when a user performs given tasks or even online activities such as viewing ads and using search engines, the proof-of-work is achieved.

How body activity and biometrics will be communicated to servers and cryptocurrency hardware, must be of interest to many people. The patent  has explained this as  “a sensor communicatively coupled to or comprised in the device of the user may sense body activity of the user.” Some sensors that can be used to this end, has brought as examples in the patent application. For instance,  “electroencephalography (EEG) sensors, fMRI scanners, heart rate monitors, near-infrared spectroscopy (NIRS) sensors, thermal sensors, optical sensors, Radio Frequency sensors, ultrasonic sensors, cameras, or any other sensor or scanner.

However, the revealing patent had caused some reactions in line with conspiracy theorists. For example, Nikita Mikhalkov, the Oscar-winning Russian director, recently unleashed his own conspiracy after taking a closer look at the patent number for Microsoft’s crypto mining system. He on the Rossiya 24 TV channel in a show called ‘Besogon TV ‘that claimed Microsoft multi-billionaire Bill Gates is attempting to microchip humanity as part of an agenda to control and reduce the population of the world under the guise of a Covid-19 vaccine!

Mikhalkov claims that Microsoft's recent patent for a sponsor-based Cryptocurrency mining rig is the first step in a Satanic plot to microchip the whole of the human race. By pointing out the number of the new revealed of Microsoft’s patent (WO/2020/060606) the director also claimed that the 060606 part of the patent’s number is an occult significance which incorporates the number 666. He said the number (666) “described in the Bible as the “number of the beast”!

In his other arguments against Bill Gates and his foundation, the Russian director drew attention to Bill Gates's popping up regularly in the media, about developing and distributing a vaccine to the global population against coronavirus. While Gates has been much-admired by most for his proactive efforts after publishing in a blog post, about his intention to develop and distribute the vaccine, Mikhailov has claimed that the coming COVID-19 vaccination distributed by the Bill Gates Foundation will be a trojan horse for microchipping humanity and scheme to enslave the world.

Like any other shocking theory peddled by a celebrity, Mikahlkov’s went viral online, getting around 700,000 views in less than in a day.

However, it should be noted that the patent WO/2020/060606 is not directly linked to Gates, who has technically stepped down from Microsoft’s board to focus on running his and his wife’s Bill & Melinda Gates Foundation and therefore, Mikhalkov’s conclusions might be quite far-fetched. Moreover, the patent does not mention microchipping, instead of describing “sensors” coupled with a “device” to register the body activity. One alleged purpose of such a technology described is to encourage a healthy lifestyle with users awarded cryptocurrency for exercising.

And in the end, it will be interesting to see how these claim and situation plays out!

Covid-19 Therapy Including Ivermectin Has Applied For A Patent by an Australian Gastroenterologist Doctor !

Prof Thomas Borody filed a patent for an unproven Covid treatment he has promoted and could now potentially profit from.

In this post an Overview of Kanoon IP conducted webinars under "Tuesdays with IP Flavor" program is presented,

A recent patent filed by Apple reveals that the company is working on an expandable smartphone with a rollable screen.