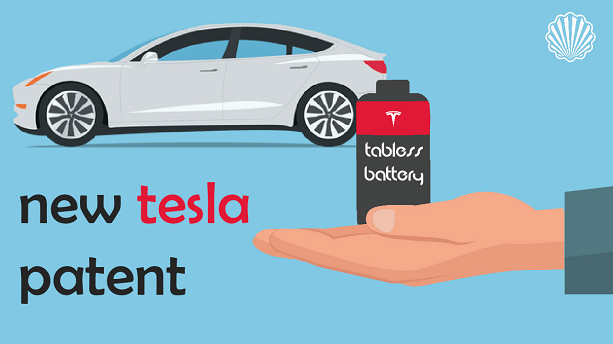 Since the batteries are the most important component of an electric car, Tesla is actively engaged in the development of its own batteries. Tesla’s mission is to produce long-range, lower-cost electric vehicle batteries that will have a long service life.

The “tabless design” in the new patent is used for a jelly roll lithium-ion battery cell, replacing tabs with conductive spikes built into the cap. The patent on new battery cell technology intends to eliminate one or both of the electrical connections between the “jelly roll” inside and the containment cylinder on the outside.  This patent was published On May 7.

But what’s a battery tab? And why does the removing tab according to Tesla’s patent, makes a big difference?

A battery tab is a tab connected to the battery cell that makes a clean connection to whatever the battery is powering.

Basically, a prismatic type of lithium-ion battery is layered like a lasagna; each layer links to the outside via a single energy-transferring tab. But, connecting that tab during manufacturing is a vital part and requires very specialized and careful welding.

The path of the current necessarily travels through these tabs to the connectors placed on the outside of the battery cell. However, ohmic resistance is increased with distance and in the existing battery systems, the current must travel all the way along with the cathode or anode to the tab and out of the cell.

Moreover, since the tabs are additional components, they increase costs and present manufacturing challenges. Therefore, it is obvious that restructuring battery designs to remove them could save a lot of time, materials, and money. It had already mentioned by scientists and scholars that tabless design will be more robust and reproducible, Easier to produce, fewer scraps, and more reliable.

In the newly published Tesla’s Patent, the battery features like bumps and small spikes act to connect different layers rather than relying on a welded, unifying conductive tab. The patent described the battery as;

The published patent follows Musk’s statement in April 2019’s Autonomy Day that Tesla has been working on a new battery pack that would be designed to last 1.6 million kilometers.

Recently, Tesla has been applying for a lot of intellectual property related to battery cells, like a new electrode for its 1-million-mile battery.

The automaker is also developing a new battery pack that would allow its vehicles to achieve a range of more than 400 miles.

Some media have suggested that this new electrode patent will help achieve the 4,000+ cycles needed to reach the promised million-mile battery lifespan