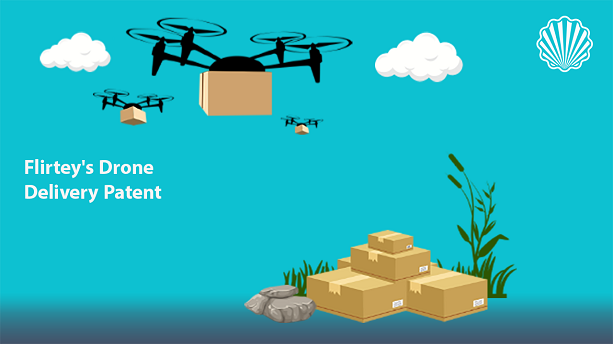 When we first heard about Amazon's delivery drones, we probably considered this application of drone technology as a fantastic idea that is unlikely to come true. Besides, what would be the mood of watching the sky while Amazon’s-led army of autonomous drones flying in?

But numerous development in delivery drone indicates that soon, drone delivery services are going to be part of our everyday lives.

Recently, Flirtey, a specialist startup in Drone delivery, announced it has been granted a critical US patent (US10112721B2 ) on drone safety mechanism. The patent refers to an automatic parachute deployment system to support drone flights for the safe and precise drone delivery of packages.

The solution disclosed by the Flirtey is encompassing hardware and software, to lifts a package and pick it up, holds it securely in flight, and safely lowers it via a retractable tether at the point of delivery.

Flirtey invented this method of delivery to be the safest and most precise, and become a standard for the drone delivery industry. The patent recognizes the ability of a drone’s technology to detect an error in operation while in flight and ultimately deploying a safety mechanism, if necessary. According to flirty, they focus more on safety and their drones by including hardware redundancies on multiple layers: motors, navigation, autonomous parachute, and a flight termination system. inside its drones.b

Flirtey holds over 25 patents, granted and pending, in the United States and worldwide.

It should be noticed that another patent US6471160B2 already filed by Airbus that focuses on deploying a parachute on a drone. But it seems Flirtey emerges as the pioneer in drone safety mechanism with its granted patent.

Note that Dron delivery can't be considered anymore as a fantastic idea these days. It's already in practice. In Virginia, a coffee-roasting company called Brugh Coffee by utilizing Alphabet's Wing drones is delivering coffee by drone.

Zipline has been also flying medical delivery drones in Africa for years and now and is asking the FAA to allow it to operate in the USA. It could help to not only create a market for drone deliveries but with the focus on medical supplies, create an aerial supply chain to quickly distribute medical supplies to areas that need it the most.

Moreover, two notable drone parachute systems are already on the market, from Parazero and Indemnis. Both deploy automatically when a fault or loss of power is detected.

There are so many unknowns when it comes to the future of drone delivery, but it is obvious that consumer protection laws will be impacted. For example, What happens if your items are damaged upon delivery? what happens if the drone with your delivery is stolen? How will you return something that is delivered by a drone?