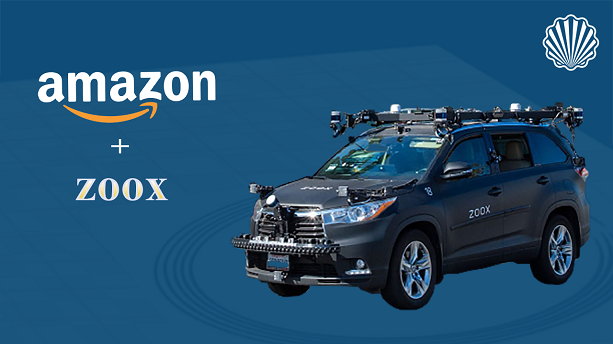 Developing and utilizing Advanced Driver Assistance and Autonomous Vehicle Systems (ADAAVS) requires the ability to collect, store and manage vast amounts of data, high-performance computing capacity, and advanced deep learning frameworks, along with the capability to do real-time processing of local rules and events in the vehicle.

It seems for giant companies, having access to autonomous driving technology is an existential issue. Companies including Alphabet’s Waymo, GM’s Cruise, Uber, Tesla, Ford, and a host of start-ups have been developing autonomous car technology for several years. The analysts estimated that industrywide, ride-hailing income would total more than $60 billion in the United States in 2023. The autonomous seems like an essential train in the future and the key players need to have a seat on that train before leaving the station and Amazone intends to be one of those key players!

During recent years, investments signal of Amazon’s transportation and logistics ambitions has became observed; The company has partnered with Toyota on an autonomous minivan and gets patents for autonomous lane-switching technology and a system that personalizes the autonomous vehicle experience for individual drivers, in late 2019. The company’s Inventors published a patent for a system of autonomous ground delivery vehicles that work with drones to deliver packages. Moreover, Amazon has invested in a variety of self-driving auto startups. Last year, Amazon took part in a funding round for Aurora Innovation an autonomous tech startup managed by the former technology chief of self-driving cars at Alphabet. Amazon led a $700 million investment in electric vehicle startup Rivian.

Although the purchase of Zoox is the company’s first acquisition effort in the space, however, the company will have to invest significantly more in the business to eventually bring the technology to market. Zoox which founded in 2014, aimed to build a symmetrical electric self-driving taxi service with no steering wheel or brake pedal. The startup raised nearly $1 billion in funding from VCs and it has been valued as high as $3.2 billion according to the Wall Street Journal.

Zoox is working to imagine, invent, and design a world-class autonomous ride-hailing experience and according to Amazon’s CEO of global consumer, “Like Amazon, Zoox is passionate about innovation and about its customers, and we’re excited to help the talented Zoox team to bring their vision to reality in the years ahead.”

Terms of the deal weren’t disclosed, but the Financial Times previously reported that Amazon would pay more than $1.2 billion to acquire Zoox. An Amazon spokesperson declined to comment about the deal amount but he declares that Zoox will continue to operate as a standalone business within Amazon, with its current CEO  and its co-founder and CTO who lead the team.

Relating News: The lawsuit over theft of Tesla's trade secrets was settled by Zoox.