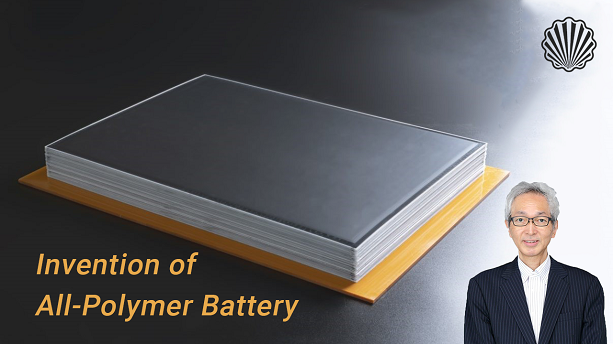 Lithium-ion batteries play an essential role in the world of technology where powering everything from smartphones to smart cars has become an important area to focus on.

A lithium polymer battery is a rechargeable battery of lithium-ion technology using a polymer electrolyte instead of a liquid electrolyte. High conductivity semisolid (gel) polymers form this electrolyte. Horie’s innovation is to replace the battery’s basic components, which are metal-lined electrodes and liquid electrolytes, with a resin construction. Hori believes this approach dramatically simplifies and speeds up manufacturing.

The invention could allow for 10-meter-long battery sheets that can be loaded on top of each other to increase capacity. Moreover, the resin-based batteries are also resistant to catching fire when punctured.

Lithium-ion batteries have come a long way of improvement since they were first commercialized almost three decades ago by Sony. Nowadays they last longer, cost cheaper (85 percent less than they did 10 years ago), and pack more power, consequently lead to the growth of smartphones and tablets with ever more powerful internals.

In a traditional battery, a puncture can create a surge measuring hundreds of amperes, several times the current of electricity delivered to an average home. But as a result, temperatures can rise to 700 degrees Celsius. APB’s battery preventing such a problem by using a so-called bipolar design, address the current power bottlenecks, and in addition to absorbing a surge of the entire surface of the battery, the resin-based batteries are resistant to catching fire when punctured.

One of the newest commercial potentials of the lithium-ion battery is within electric planes, though the current energy density of lithium-ion batteries is roughly 2 percent that of kerosene jet fuel. The largest electric plane to have flown to date is a modified nine-seater Cessna, which achieved a 30-minute flight earlier this year.

However, experts assume the technology has its own shortcomings; Polymers are not as conductive as metal, and that could significantly impact the battery’s carrying capacity. Moreover, since the cells are connected back-to-back in a series, making it difficult to control each one individually.