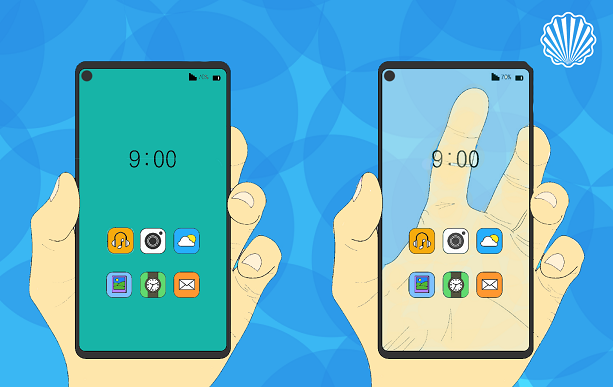 One of the applications of patent information is to know in which direction the research and development departments of manufacturers are moving. The new patent of Samsung, tells us that Samsung is coming up with a mobile phone with a transparent screen.

Even though the patent was published last August, it was presented at the beginning of this same 2020, which means that Samsung has already been working on the tests for its new transparent device for some time. The patented device is about total or almost total transparency.

The idea of transparent mobile phones is not a new idea and already some companies have filed patents in this filed. For example, In 2018, LetsGoDigital already reported on a Sony smartphone with a double-sided transparent display. The Korean counterpart LG even has one transparent foldable phone patented.

Samsung itself has had transparent displays for the B2B channel which introduced in the past. The company also has a mirror display and transparent OLED Signage released, intended for promotional purposes, or to display a welcome message.

In January 2020, Samsung Electronics filed a utility patent with the USPTO and the WIPO (World Intellectual Property Office). The patent was published on August 27, 2020, and describes the technology needed to create a transparent smartphone.

Basically, an OLED display which is distinguished by low power consumption, faster response, and high brightness than normal LCD displays. The OLED screen is equipped with a transparent shining display panel through which light can shine. Therefore, content can be displayed on the transparent screen while users can see through the phone at the same time. According to the patent, the mobile supposed to be a flat display, but also a flexible screen that can bend, fold, and/or roll – according to the patent description.

The patent reveals that the different layers are used to achieve a wholly usable screen with regard to displaying graphics and all kinds of moving images, while the screen is transparent to a greater or lesser extent.

However, it is not clear that what solution is used to make the inside of the phone disappear or transparent?! Will Samsung evolve it and use it in folding or unroll screens?

Although a transparent version of some hardware such as batteries and screens are already available, what about other parts. Do the components get constantly miniaturized and fit into even small off-screen areas? Moreover, what would be the benefits of this transparent mobile phone compared to the costs involved in developing such technology? We should wait and see how Samsung overcome these issues.