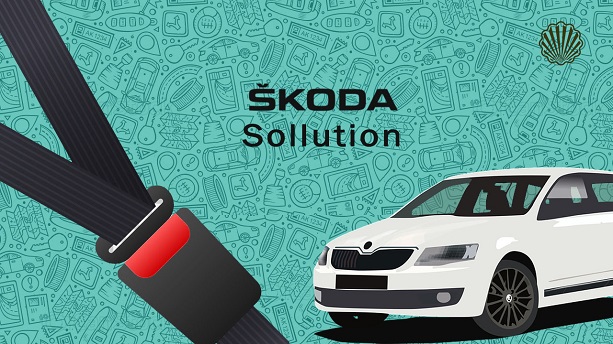 Reminding the passenger in a car to belt up and fumbling to find the seat belt buckle in the dark, more so in an unfamiliar vehicle, has been a requirement for many years and Skoda’s latest innovation could address this issue and help reduce the risk of injury when an accident happens. According to this simple look innovation, the seat belt fastener LIGHTS UP to remind passengers to buckle up.

Aiming to eliminate the trouble of trying to belt up, especially at night, Skoda, the historic Czech carmaker came up with the innovation of illuminated smart seat belt buckles. fumbling to find the seat belt buckle in the dark, more so in an unfamiliar vehicle.

The invented lighted system has a clear transparent button in place of the traditional red eject button. The new button features a pair of multi-color  RGB LEDs which works in two modes: if nobody in the seat, the LEDs will be white to show the passenger where the buckle is located at night.

When the passenger is detected on the seat, a weight sensor in the seat base through load recognizes the presence, and the LED becomes red. after buckled up, the LED changes to green to show that engagement was successful and then switches back to white in order to be less distracting to the passenger.

Skoda is one of the most active companies in the Czech Republic in view of filing patents. Every year, the company, with the purpose of making life easier, safer, and more enjoyable for owners and drivers,  files numerous patent applications for ideas and systems.

In 2019, the factory filed 94 individual patent applications, which is more than any other company in the Czech Republic. Their list of protected innovations not limited to vehicles only but also includes carpet mats made of hollow fiber fabric, a flexible cargo snake, and a production line camera system that can align parts of the car body before welding more precisely.

Seat belts were invented in the 19th Century by English engineer George Cayley. By the mid-1950s, several designs were tested, including America's and an almost perfect suggestion by Saab in 1958. However, the three-point V-belts we know today came to be thanks to former SAAB aircraft engineer Nils Bohlin, who patented his idea at Volvo in 1959. The bigger Swedish carmaker made Bohlin's invention standard equipment straight away, saving millions of lives ever since.