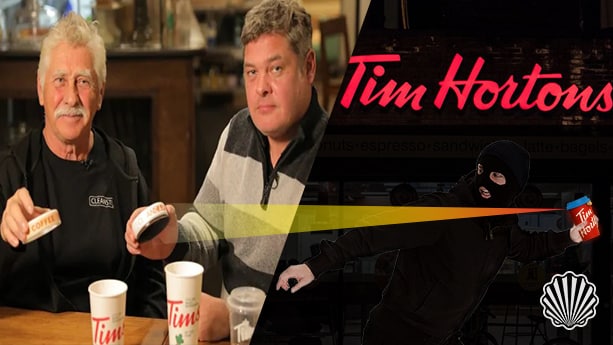 Inventions are generally invented to solve technical problems that exist in devices and processes. Creative people realize these problems, observe profoundly, and understand how everything works. They are the tinkerers, who for example pull something apart to see if they can put it back together, probably with a modification or two of their own.

Although the solution to some technical problems is valuable, sometimes they look very simple! Therefore protecting them from copy and free riding become more difficult as verifying the uniqueness of their idea becomes complex!

How individuals or small entities could protect their ideas from others taking them and enjoying the fruits of their mental labors?

Preventing the spread of COVID-19 at fast-food operators was one of those problems. Having safe coffee involved the mind of the Father-son team, Yoland, and Shaun Talbot and they came up with many ideas on hands-free applicator for coffee cup lids and made efforts to manufacture them.

Although Yoland (the father) had zero experience as an inventor, however, within three days, he'd come up with a design, and his son Shaun, 42, had found a manufacturer to produce thousands of the new device, named the CleanCap.

The product is a simple ring manufactured with medical-grade plastic. It easily holds a single lid from a stack. Then cap can be used to place the lid securely on top of a coffee cup, hands-free. A lawyer in Toronto helped the pair file applications for patents in the U.S. and Canada.

Another familiar story of infringement

They need to bring CleanCap to the market, therefore they started to contact fast-food operators. One of them was Tim Hortons corporate-level manager. Tim Hortons could become their biggest financial opportunity as they had asked for hundreds of samples to be sent to franchisees across the country for testing, and had even sent the CleanCap for environmental testing at a firm in North Carolina.

However, they couldn’t reach an agreement over pricing and the team of father-son focused their energies on other potential buyers. but in July, they were surprised when they saw the Tim Hortons "red ring" in people's hands outside the Tim Hortons shops which looked the same as the CleanCap!

Normally the big companies deny this kind of copying the individual ideas as Tim Hortons did: they said there were many designs suggested to them and what has happened is simply is one of fair procurement.

The partner manager of a  law firm with many years of experience dealing with large companies and patents believe the designs are substantially similar. There's only one feature on this product that is relevant, which is the gripping surface. And the two products have the same gripping surface and very similar materials.”, He said.

The way he chose to examine if everybody could come up with the same idea of the “father-son team( as Tim Hortons had claimed), was interesting: he asked the frim designers to draw their ideas of a hands-free lid applicator without sharing the background of the Talbots' situation with Tim Hortons. The team came up with eight different types of applicators and actually manufactured one using an in-house 3-D printer. Interestingly none matched the CleanCap as closely as the red ring from Tim Hortons!

How could these kinds of usual challenges be addressed?

Companies are biased to take inventors' ideas. They want a solution. At the same time, inventors have to do design and create the business, and are maybe too slow and take the time that is not the company's preference!

If Talbot’s team truly believes Tim Hortons copied their design, they could consider legal action but the legal action could only happen if their patent is granted, which is not guaranteed.  In the legal action process, the patent lawyers and the patent office go back and forth and argue about what is actually entitled to for protection. And it takes typically two to three years, if not more Moreover, it can cost $100,000, while actually going to trial costs much more.

Therefore it is very common for small business people to worry about submitting a patent-pending product to a big corporation. They have to predict such cases that cost money to go to court and defend themselves," In fact, it makes no sense to spend more on a lawsuit than an inventor could potentially collect as damages, measured by the potential revenue lost.