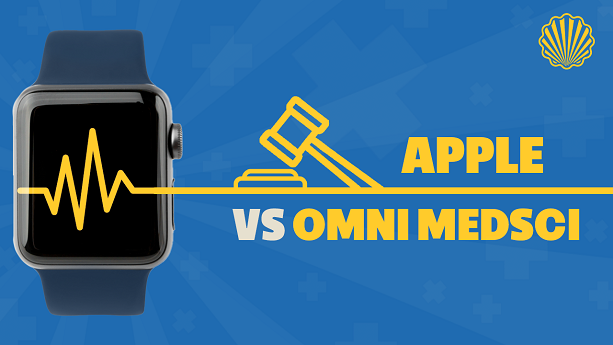 Heart rate sensor is of those feature in Apple Watch that stands out more than other feature. In fact, the heart sensor is a major selling point for Apple’s wearables. However, technology ownership is a challenging subject and is likely to involve Apple in an ongoing lawsuit!

According to recent news, the US federal circuit Court ruled that Apple can’t avoid the lawsuit put against it by Omni MedSci.

But what is the lawsuit put by OMNI MedSci?

The heart rate sensor used in the Apple watch uses the technology disclosed by Michigan University patents.  The Michigan University for this founding was sponsored by Apple. In the inventor list of the patent, the name of university of Michigan professor Mohammed Islam is observed. Mohammad Islam later assigned the patent rights to Omni MedSci.

Mohammed Islam is the owner of Omni MedSci. He owns six companies and has collected more than 150 patents. In the past, he has used those patents to sue companies that include Fujitsu, Alcatel-Lucent, Huawei, Nokia, and Siemens. Islam is also employed by the University of Michigan.

The original lawsuit, filed against Apple in 2018, alleged that the Apple Watch's heart rate measurement technology infringed on multiple patents owned by Omni MedSci Inc. Apple tried to dismiss the lawsuit, only to be denied by a U.S. District Court.

According to the original 2018 lawsuit, Islam met with Apple administrators to discuss the medical patent applications ahead of Apple Watch's launch. The complaint alleged that Apple took ideas from those meetings and incorporated them into the heart rate sensor of the Apple Watch!

In the lawsuit, Islam seeks damages for infringement and an injunction against products that infringed on the patents-in-suit.

However, on the other hand, Apple claims that the patents in question are actually owned by the university, not Islam. This is why the company was aiming to get the lawsuit dismissed in 2018. Apple says since Islam's employment agreement specifies that any patents would belong to the university if they were obtained through activity is supported.

Omni MedSci has alleged that Apple intentionally infringed its patents. The company is filing for an injunction to stop the Apple Watch from selling, accompanied by damages.

However, according to the court ruling, Islam’s employment at the university does not automatically assign those patents to the educational outfit!

The Apple Watch is an important product for Apple and is part of the company’s wearables, home, and accessories segment that generated sales of $8.78 billion in the recent third quarter, up 36% year-over-year.

Tesla new granted paten unveiled windshield with no wiper. The patent that many called it as insane and unreachable patent.

According to ne released statistics, China leads global 6G patent applications with most of them being filed by Huawei!