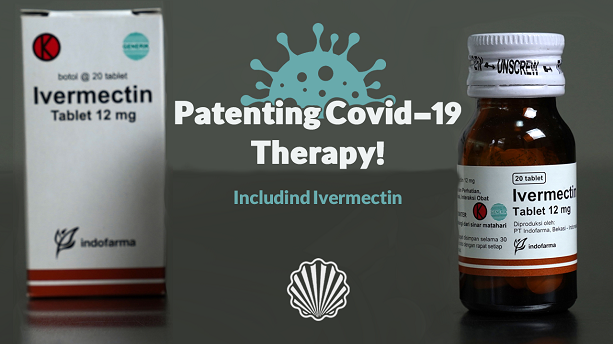 Oct 18, 2021 Covid-19 Therapy Including Ivermectin Has Applied For A Patent by an Australian Gastroenterologist Doctor !

You may have already heard about Ivermectin. Ivermectin is an over 30-year-old magical drug that is approved as an antiparasitic by the World Health Organization (WHO) and the US Food and Drug Administration (FDA) and It is widely used in low- and middle-income countries to treat worm infections.

Its lasting influence on global health has been so profound that two of the key researchers in its discovery and development won the Nobel Prize in 2015.

At the beginning of the pandemic, scientists and doctors tried to find inexpensive medications to reuse for the treatment and prevention of COVID-19. Chloroquine and hydroxychloroquine were two of those drugs. They were chosen because of possible antiviral effects documented in laboratory studies and limited anecdotal case reports from the first COVID-19 outbreaks in China.

Meanwhile, other studies have evaluated ivermectin as a treatment for, COVID-19 infection. A review by the Front Line COVID-19 Critical Care Alliance summarized findings from 27 studies on the effects of ivermectin for the prevention and treatment of COVID-19 infection, concluding that ivermectin “shows a strong signal of therapeutic efficacy” against COVID-19[1].

Prof Thomas Borody, an Australian gastroenterologist who has been keenly promoting an unapproved Covid-19 treatment, including to Australian politicians and general practitioners, has filed a patent in the USPTO for the same treatment, which after grant, allowing him to commercialize and profit if approved.

Prof Thomas in many medical newsletters and publications promoted what he described as “triple therapy protocol” to treat and cure Covid-19. The protocol involves a combination of the anti-parasitic drug ivermectin, zinc, and the antibiotic doxycycline.

In December 2020 Borody filed a patent in the US for therapeutic combinations of drugs, including a combination of ivermectin, an antibiotic, and zinc.

Patenting a treatment means the owner of the patent is allowed to exclusively manufacture, market and profit from the drug until the patent expires, usually after 20 years.

The evidence shows that before patenting (December 2020), he had some efforts to achieve governmental funds;

However, in his efforts to lobby the government, he never declares that he is trying to protect the protocol as a patent!

However, the TGA investigation alleged advertising of a triple-therapy protocol for treating Covid-19. The advertising compliance investigation was closed following the removal of relevant content that promoted the use of the protocol, including prescription medicine, from the website. Prescription medicines cannot be advertised in Australia unless permission applies.”

Despite such banding, Borody’s Centre for Digestive Diseases updated its website to state it could no longer accept referrals for the treatment or prevention of Covid-19 or prescribe ivermectin for Covid-19.

Borody however, told the Guardian in a statement from his lawyer that he holds already 162 patents for different treatments and therapies for various diseases. One of his previous works was done in the 1980s developing the first therapy, also a combination therapy, to fight H pylori and cure peptic ulcers.

He claimed again that his so-called life-saving triple therapy with a track record of having saved millions of lives worldwide and 1,050 lives each year in Australia, as well as more than $10bn in hospitalization costs.

He added that would not have been possible unless the therapy had been patented!

There are considerable commercial benefits in having a patent because of the monopoly rights granted.

Likewise, in Japan, patent claims directed to methods of medical treatment of humans are not allowable, and the patent laws of China state that no patent right shall be granted for a method of diagnosis or for the treatment of diseases.

In the USA however repurposed drugs are typically only patentable using the method of treatment (MOT) claims (e.g., “a method of treating disease X, comprising administering a therapeutically effective amount of drug Y”) rather than the composition of matter claims (e.g., “a composition, comprising drug Y”) because, although the MOT is presumably new, the repurposed drugs themselves are not.

Therefore, it seems, Professor selected us as it has no limitation on patenting treatment method.

However, the patent must be undisclosed and the grace period is normally considered in filing this patent and we must see what is the effect of such disclosing and making the method  available in the public domain on the patenting process