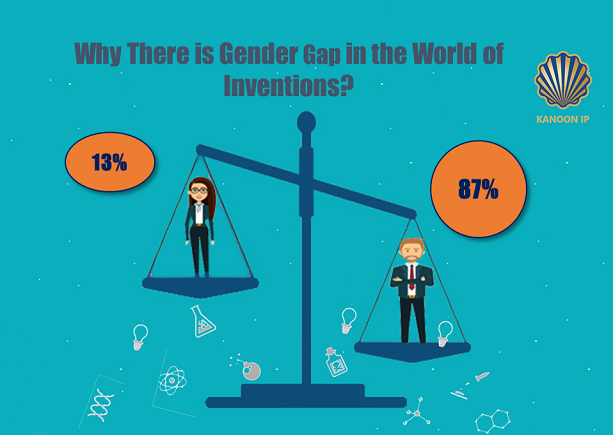 The proportion of female inventors worldwide rose from approximately 6.8% to 12.7% Between 1998 to 2017. According to the UK's Intellectual Property Office (IPO) report. However, despite the widespread participation of women in educating science, technology, engineering, and mathematics (STEM), the research results implicate that inventor women are still very few and these few inventors have mostly worked on their invention individually or as a part of a male team.

To understand the representation of males and females within the patent system In the following section, we review the results of IPO analysis on gender profile in worldwide patenting, and in the Debates section, the highlighted gaps will be focused and some surveys that conclude such results will be introduced.

Historical Dimensions of women in the invention world:

Research shows that the share of women in patent applications was generally between 2 to 3% by 1965 and it reached 6.8% till 1998. The women participation rate in patent application filing has increased dramatically with at least one female inventor in each of the five applications over the past 20 years. Although women have recently played a greater role in patent than in the past, they are working as a part of a larger all-male team.

Figure 1:The proportion of worldwide patent applications associated with one or more female inventors,1915-2017

Proportions of female inventorship by country

According to the statistics from the US, which illustrated in Figure.2,  Japan, Germany, China, South Korea, France, and the UK with the highest number of inventors, China shows the highest growth rate of women participation in patent applications from 10% in 1998 to 14% in 2017. However, France is still the leader with 16% of women participation in patent applications in the same period.

Figure 2: Annual trends in the proportion of female inventors by residence country, 1998-2017

Female representation within teams of inventors

Parts of the IPO results paid attention to how teams of inventors are made up of males and females. The study about the gender and form of inventors’ team have divided them into Four Groups;

3- Mixed team with one woman

As shown in Figure.3, results imply that women have the most participation in the "Mixed team with men" or in other word, female inventors prefer to work individually more than in an all-female Team. In fact, women prefer to work independently rather than being a part of an all-female team. Another point is that women are trying to join to a mixed team, according to the studies in two periods of 1998-2002 and 2013-2017, the percentage of men's and women's participation in unisex teams have been dropped and the share of the mixed teams consisting of one or more women is increasing in recent years. 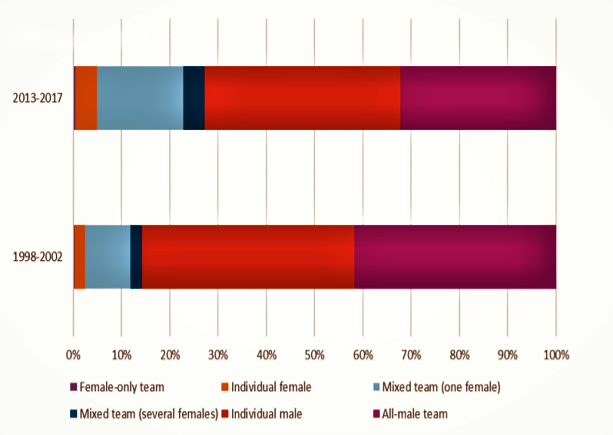 Proportions of female inventorship within differing areas of technology

There are different trends in female inventor-ship depending on the technology area. The technology areas that enjoy the greatest levels of female participation are Biotechnology, Pharmaceuticals and Organic Chemistry. Women have contributed to the inventions of approximately half of the patent applications made in these fields between 1998-2017.

By classifying the International Patent Classification (IPC) into 650 subclasses and then into 35 major areas of technology and 5 major sectors, the patent applications are classified in 5 sectors of Chemistry, Instruments, Electrical Engineering, Mechanical Engineering, and others. Among the aforementioned sectors, women with 35% of the patent applications in the field of chemistry have the most participation in this sector. After chemistry, tools, other fields, electrical and mechanical engineering are most attractive to women respectively.

In the chemistry sector, biotechnology and pharmacy (34%) with more than half of female inventors, the tools sector, biological measurement instruments (23%) and in the other sectors furniture and games (6.1%) and consumer goods (6%) have the highest rate of women participation in fields of technology.

The representation of women within STEM fields (science, technology, engineering, and mathematics) has been of great importance to governments and policymakers. Outputs of work undertaken within STEM includes inventions for which protection is sought through patent applications.

Although the presence of women in patenting is increasing, we will not expect gender equity in patents until 2070. The gender gap could reflect the fact that in most countries, far fewer girls than boys study STEM subjects.

But referring to the IPO results ( Figure 2), it could conclude even in the developed countries which there is greater gender equity to study STEM between men and women, such a big gender gap in inventor-ship is still remaining. For example, France has had the largest proportion of female inventors since 1998, and throughout the period 1998-2017, this proportion has remained steady at around 16%. That is still a small portion.

The small contribution of women compared to men in the world of the invention needs to be further examined; What issues resulted in such small contributions? Is there still a dominant idea in innovative places that are dedicated inventor-ship to men? Are there any restrictions for women in academia and research centers to become women inventors?

The success of men in the field of patents may be one of the important reasons that could explain women's intention to work with men as a team in the invention world. The results of psychological research by Joyce Benenson suggests that women and girls are less willing than men and boys to cooperate with lower-status individuals of the same gender!

Results of some research suggest that in the workplace, there has always been an acceptance of men as team leaders among the women in that team. In 2011 Kim Elsesser ma lecturer at UCLA analyzed responses from more than 60,000 people and found that women—even those who were managers themselves—were more likely to want a male boss than a female one. (Men preferred male bosses too, but by a smaller margin than the female participants did.)

Such tendencies and preferences could reflect many social and psychological aspects of women's life and must be researched with more security.  University management professor, Michelle Duguid, has explored something called “favoritism threat. According to her result, women’s concern that they’ll seem biased if they help one another. In a working paper, Duguid showed that “token” women who had helped other women in the past avoided doing so again when given the chance. It seems, most women prefer not to be identified as supporting other women (feminism)

So, do women criticize each other in workplaces?

Although there are many shreds of evidence in which women could work together very well, criticism of other women is still observed in the workplace. As a general rule, in any society, the people within a marginalized or low-power group end up taking out that pain and anger on each other through in-group conflict. The women community seems to be in this group.

So if the woman could walk out of the marginalized group, could it result in supporting another woman? It might be. In General, for succeeding in the workplace, women should adapt themselves to the working rules made by men already.

In accordance with such working rules, women have to change themselves and should behave more aggressively, and. Therefore, in the workplace (where could be academia) some of the femininities, even when they don’t influence required results, are still considered as a weakness in front of the eyes of the other women. In fact, women will lash out if they see something emerging or expressed in another woman that they have squashed in themselves. With this respect, self-awareness and self-scrutiny couldn’t’ give a better view of working with another woman in a team and not consider female characteristics as weaknesses?

Men and women are equally creative and innovative. Yet, women remain under-represented in many areas. Several international organizations such as WIPO have committed to promoting gender equality and women’s empowerment in the world of intellectual property (IP). In this way, The small contribution of women compared to men in the world of the invention still needs to be further scrutinized.

With respect to little cooperation of women in an all-female team, it also is better to be further examined. Additionally, it might be better designed special kind of empowering programs, that focuses on more on self-scrutiny and self-awareness besides other empowering required for women in STEM.