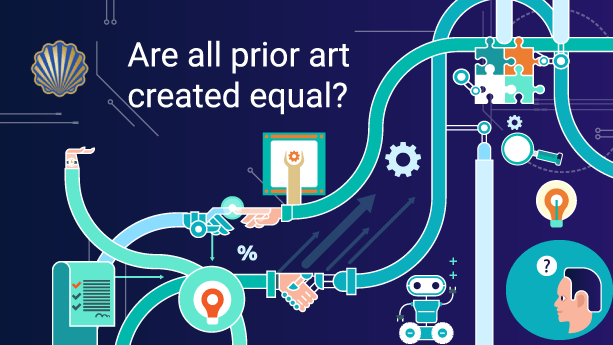 Are All Prior Art Are Treated Equally?

We all know that the existence of "prior art" can be a roadblock to obtaining a patent. Prior art is defined as any evidence that proves your invention is already known. According to EPO, the prior art does not need to exist physically or be commercially available. It is enough that someone, somewhere, sometime previously has described or shown or made something that contains a use of technology that is very similar to your invention.

What are the different types of prior art?

To finding the answerers, we shortly look up the available resources achievable via internal. Inappropriately, there is not available enough information to ensure which types of prior art are most likely used by examiners during patent granting and whether prior art in different languages ​​is also fully explored.

However, it can be said that the “time” is a limiting factor for any examiner to explore all variety of prior knowledge for confirming the novelty and inventive step of an application. With this regard, Journal articles and patent documents are more likely to be explored by the examiners during patent granting.

Results of a study by Frakes & Wasserman (2014)  revealed the USPTO examiners are apportioned a pre-determined number of hours to review each application and are effectively compensated under the assumption that they spend that amount of time on the application. The number of hours depends on the technologies of the application. For example, for patent applications in Artificial intelligence, the examination generally takes 31.6 houses. While, examiners with the same experience in the compound tools area (i.e., hammers, wrenches, etc.), are allotted only 13.8 hours.

But what happens if the substantive examination has not considered all types of prior arts and application has been granted. It is possible that

This process is known as the “Opposition” in the European Patent Office and “reexamination” in the US Patent and Trademark Office (USPTO). After approving a patent for a grant, the protesters are given a few months to oppose the invention subject to the grant.  Oppositions can file on many grounds. For example, if the subject of the invention is not patentable or is not consider as a novel invention or it is obvious in the light of prior knowledge.

In Europe, any third party, even in the form of a straw man (anonymously and on behalf of the complainant), can file a post-grant opposition under EPC rules. The results of the examinations either have no effect on the patent granting or withdrawal.

In the US, a nine-month after granting, any third party could file an opposition, which is called inter-parte reexamination. During the patent life, of course, there is still the right to appeal, which is a fully litigious process, and in the USPTO this process is called Ex Parte reexamination, which costs more than the former type for the plaintiff.

Which prior art will be considered during the invalidation process?

Since no prior study has provided a comprehensive picture of the prior art underlying those district court decisions, Professor Yelderman in one research, analyzed the prior art with a focus on those relied upon by courts in invalidations procedures. In the following paragraphs, we highlight some of his research results that could partly answer some of our questions.

Professor Yelderman in his research focused on the prior art relied upon by courts when finding claims to be either “anticipated” or “obvious”.  Regarding his article, “anticipation” doctrine is what we call “lack of novelty” requirement”. A patent claim has novelty only when all of the elements of the claim can be found in a single prior art reference. Therefore, the anticipation inquiry is quite straightforward. The factfinder simply compares the prior art to the patent claim to see if there is a match. 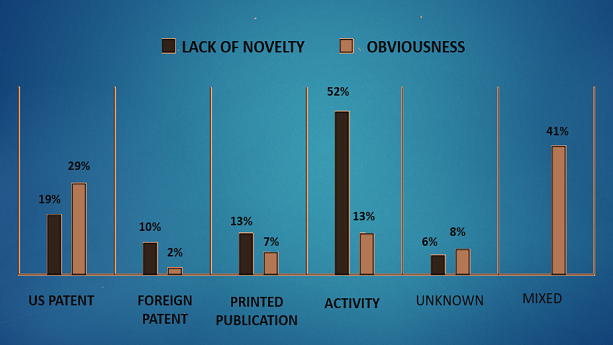 As illustrated in Figure 1, the majority of novelty invalidations (52%) relied on prior art classified as activities (solid black columns). in view of obviousness, since 41% of obviousness invalidations involved “mixed” prior art (orange column) means that the court relied on at least one reference in one category and at least one reference in a different category. Therefore, to obtain a clear picture of how courts use prior art to find claims obvious, the cross-category combinations have been used in this study.

FIGURE 2: Basic for invalidity based on obviousness (Stephen Yelderman (2018))

What is the foreign patent, printed publication, and activities role in the novelty and obviousness invalidation?

FIGURE 3: Basic for invalidity based on a foreign patent (Stephen Yelderman (2018))

As it is illustrated in figure 1, the majority of novelty invalidations (52%) relied on prior art classified as activities.  prior uses, sales, and earlier invention by someone else are categorized as “activity”. The figure illustrates also that nearly a third (28%) of obviousness events drew at least partially on prior activities. The study results of Yelderman, couldn’t be able to reveal clearly which activities have a higher weight in invalidating the patent. And the incentivizing value of invalidation based on prior activities remains ambiguous. For one, public uses and sales that are undeniably public can still be small scale, such as the sale to a handful of select customers. And even when use or sale was widespread, these activities may not leave the kind of publicly searchable records that a third party could be expected to find years after that activity has ceased.

Due to the time limit of examination in many national patent offices, as examiners are given less time to review applications upon certain types of promotions, the less prior art they search and then cite and the less likely they are to make time-consuming obviousness rejections. Therefore, the more likely they are to grant patents without comprehensive examination and search and cite all types of prior art.

A significant number of obviousness invalidations rely on obscure prior art, suggesting that they may be less likely to provide incentivizing error correction. However, current policies encouraging testing of obviousness may nonetheless be defensible on other grounds and will require further study.

IS THE TIME ALLOCATED TO REVIEW PATENT APPLICATIONS INDUCING EXAMINERS TO GRANT INVALID PATENTS?: EVIDENCE FROM MICRO-LEVEL APPLICATION DATA Prior Art in the District Court The Failed Promise of User Fees: Empirical Evidence from the United States Patent and Trademark Office

The use of artificial intelligence is growing and so are its legal issues. AI is currently use as a tool in hands of a human and assist him to invent. But what would be a situation where the AI plays a more central role? In what extent is it no possible to identify a human inventor?