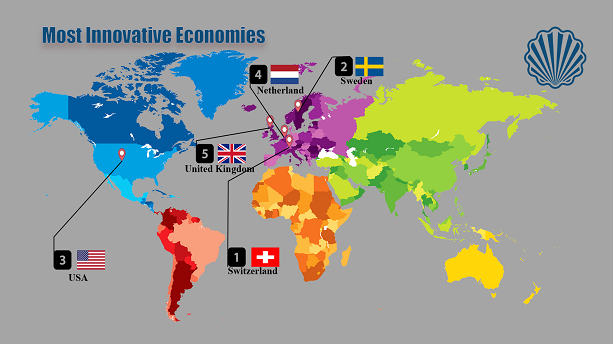 The Most Innovative Countries and the Measurement Metrics!

Recognizing the key role of innovation as a driver of economic growth and prosperity, and the need for a broad horizontal vision of innovation applicable to developed and emerging economies, measuring the innovation has become of importance.  However, measuring innovation is a tricky business and depends on how you define innovation.

Different definitions are used by different indices to measure innovation. GII (Global innovation index) and Bloomberg innovation index, are of those more referenced indexes among the others.

The core of both indices is for ranking of world economies’ innovation capabilities and results. Regarding the innovative indicators they used, they somehow show different results. In this article, we focus on some of the key findings of the Global Innovation Index as well as Bloomberg Innovation Index, regarding “the countries “that ranked as the most innovative countries and the research and patents that used by both indices as one of the main indicators.

The Global Innovation Index (GII) is an annual ranking of countries by their capacity for, and success in, innovation. It is co-published by Cornell University, INSEAD (a graduate business school with locations in Europe), and the World Intellectual Property Organization (WIPO), in partnership with other organizations and institutions. The GII is based on both subjective and objective data derived from several sources, such as the World Bank and the World Economic Forum.   More than 80 indicators are used in GII to explore a broad vision of innovation, including political environment, education, and infrastructure and business sophistication.

The latest edition of  GII (2019), have a special look at the life sciences. The theme for the 2019 edition is “Creating Healthy Lives—The Future of Medical Innovation”. The index provides detailed metrics about the innovation performance of 129 countries and economies around the world.

The left is the two output pillars that capture actual evidence of innovation outputs: (6) Knowledge and technology outputs and (7) Creative outputs. It should e noted for measuring purpose, each pillar is divided into sub-pillars and each sub-pillar is composed of individual indicators (80 in total in 2019).

What was interesting in the published report was that the statistics on R&D expenditures and on patenting activities in different countries indicate that developing and developed countries are investing heavily in innovation, according to WIPO’s   GII 2019.

As key finding oF GII 2019 which give information about top 14 innovative countries is illustrated in the below table (Figure.1) Switzerland is ranked as the world’s most-innovative country followed by Sweden, the United States of America (USA), the Netherlands and the United Kingdom (UK).  in this edition, Singapore ranked in 8th place with a score close to Denmark and took first place in its region (South East Asia, East Asia, and Oceania). China ranked in 14th place and is the only middle-income economy ranked in the top 30.

Figure.2 shows the top innovation economies by region. As you see, Northern America and Europe continue to lead in the top 10 global innovation rankings.  in Central and Southern Asia, the countries' ranks are not significant, and this area took 6th place at ranking by region.  India ranked first place followed by Iran in this region.

As already mentioned, in previous paragraphs this edition of GII focuses on life science. In the last decade, filling Patent applications in pharmaceuticals, biotechnology, and medical technology has been growing strongly year-over-year. Figure 3 shows that medical technology is the technical field that has filed the most patent applications via the PCT route (nearly 7% in 2017), more than patents relating to pharmaceuticals and was the fourth-largest technology filing area in 2018.

According to the results, Switzerland is a world leader in several key innovation indicators, including PCT patent applications by origin and takes the first position in PCT patent applications by origin and IP receipts; and gains the 1st position on patent families. Regarding international patents, European countries take seven of the top 10 positions—with the three remaining places belonging to Israel, Japan, and the Republic of Korea.

the U.S., China, and Germany; Brazil, India, Iran, the Russian Federation, and Turkey constitute the top 100 list of science and technology clusters. The US (26) and China (18) host the largest number of science and tech clusters in 2019.

The Bloomberg Index for measuring the innovation adopts a broad definition of innovation—“the creation of the products and services that make life better”—but then goes on to take an R&D and technology-centric view of innovation rather than a market-centric or contextual view.

The annual Bloomberg Innovation Index analyzes dozens of criteria.  Bloomberg ranked countries based on their overall ability to innovate. Seven equally weighted metrics were considered and their scores combined to provide an overall score for each country from zero to 100. These metrics including patent activity, Research personnel concentration, Postsecondary education, technology company density, productivity, manufacturing value-added, research and development expenditures.

According to the Bloomberg Innovation Index with regard to the most innovative countries (figure. 4), Germany has been named the most innovative country in the world and has broken South Korea’s six-year winning streak. Germany scored three top-five rankings in value-added manufacturing, high-tech density, and patent activity. South Korea lost its crown in part due to a relative slump in productivity, falling to No. 29 from last year’s No. 18 ranking in that category.

The US, which took first place when the Bloomberg Index first debuted in 2013, ranks at the ninth most innovative country in the world and Japan's innovation ranking dropped by three spots since last year (it is now in 12th place).

Singapore’s rise to third place overall, from sixth last year, was aided by productivity and value-added manufacturing gains, while it retains a best-in-world ranking for tertiary-education efficiency.

The world’s second-biggest economy, China, edged higher by one spot to No. 15. It held onto a second-place ranking on patent activity and broke into the top five for tertiary efficiency.

You may have heard the saying, "you can't manage what you don't measure". What we can conclude from the saying, not everything in life, or business, can be measured accurately. Due to the abstract and somewhat uncertain nature of innovation, finding the right metrics to measure innovation can be tricky.

As observed from the key findings of the two indices we discussed, there is some kind of dissimilarities between the key findings: Although the GII 2019, links mostly on medical and health relating innovations, but in the 2018 edition (energizing the world with innovation) Switzerland had the same position as the most innovative country.  In the Bloomberg innovation index, Switzerland ranks as the 4th one.  Moreover, South Korea is not among the top ten countries in the WIPO GII 019 report. While South Korea has been introduced as the second most innovative country according to the Bloomberg Report.

Although the numbers and the ranking from these indices reports look quite real and closely reflect the actual situation as a whole, the inconsistencies, however, might highlight the importance of the indicators selected for measuring innovativeness.

Meanwhile, It should be noticed in the indicts key finding is that these multi-parameter innovation indices recognize scientific publications and patents as one of their indicators. These indices count the overall innovation performance of a country, including patents or papers that never find commercial use.  Although these indicators are so important, but the commercialization ability required to push the inventions further.

To have more realistic results, maybe the policies of Governments and grant funding bodies should be rethought and considered in measuring as well. It might be noted that the funding policies resulted in more patents and researches without any commercialization and product development and therefore, no real innovation.  Therefore there is needs to be cautious about the metrics are used to measure innovation.