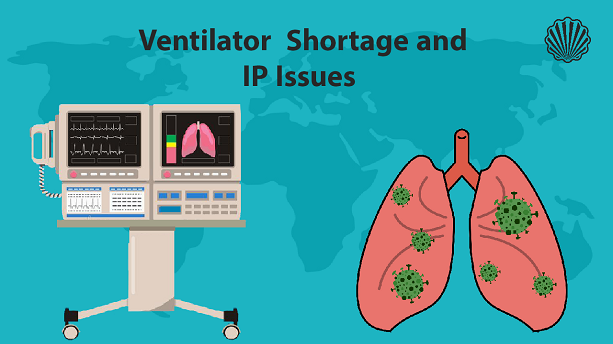 Ventilators: History of Invention and Their Situation in Coronavirus Pandemic

The ventilators are a critical component in treating the most severe cases of the disease, in which inflammation restricts the amount of oxygen a person’s lungs can take up on their own.

Ventilators pump oxygen into the lungs and remove carbon dioxide from the body. Many patients who are hospitalized with a severe case of the coronavirus need this machine because their blood oxygen level drops precipitously (hypoxemia) which can cause organ damage and be potentially life-threatening.

The ventilators are differing in size and cost. They vary from the portable units used at home or in ambulances, to those found in intensive care units. However, their purpose is the same: A ventilator is technological equipment which is designed to breathe for somebody who is unable to breathe effectively on their own. In a simple word, the ventilators force oxygen into the patient’s lungs, and usually, this is done through intubation (Intubation is a process of inserting a breathing tube called an endotracheal through a patient’s mouth or nose to reach the throat (trachea). This tube normally is used in ICUs.

In severe cases such as what is happening in  Covid-19 patient, the availability of a ventilator to help a breathe can determine if the patient lives or dies.

The history of ventilator

Ventilators at the beginning known as respirators or mechanical breathing apparatus.  This machine was believed to have some usefulness but was not used widely. The huge scale of the polio epidemics motivated researchers to come up with the device. In that time, incidents of poliomyelitis (polio) began to rise to epidemic proportions across Europe and North America, reaching their peak in the United States in 1952, with 57,628 cases in one year. In fact, the resurgence of polio marked a turning point in the history of mechanical ventilation.

In the polio epidemic, the respirator (ventilators) got a nickname as “iron lung”.  Iron lungs were a solution that came from a team of Harvard University as a respiratory machine. The iron lung was used between the 1930s and 1950s by patients whose breathing muscles had been paralyzed by polio. One of the worst symptoms of acute polio was muscle paralysis. If paralysis affected the chest muscles, the patient couldn’t breathe unaided and might die.

Philip Drinker and Louis Agassiz Shaw invented the first iron lung at Harvard School of Public Health in 1931. The early iron lungs were called as Drinker respirator. The machine consisted of a huge metal box in which a set of bellows attached at one end to a pump. 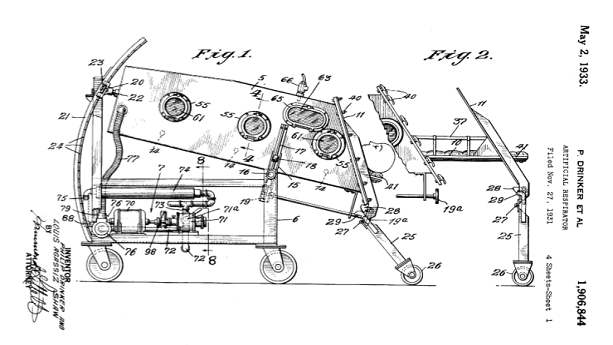 In the invented device, the whole patient’s body was enclosed in an airtight chamber, apart from the head. A tight rubber seal supported the neck and ensured that the air did not escape. The patient rests on a bed within the steel cylinder of the respirator. The pump removed air inside the chamber, creating low air pressure around the patient’s chest while the patient lying inside the iron lung’s airtight chamber. Those iron lungs used negative pressure to help patients breathe and enabled the lungs to expand, causing the patient to breathe in air in and out. 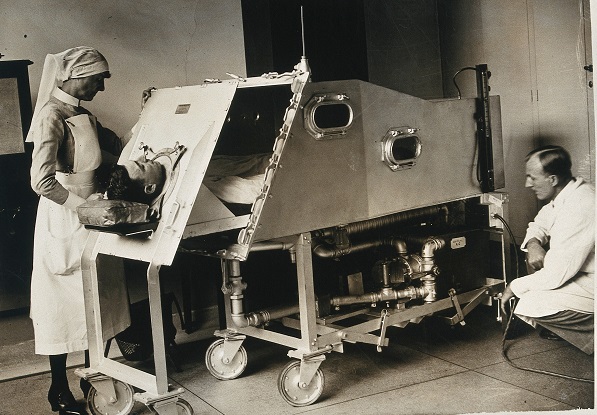 The development of iron lung and the possible patent infringement

In 1939, John Haven Emerson improved the ‘Drinker’ design by improving access to the patient. Emerson's iron lung was quieter, lighter, more efficient, and cheaper, therefore, it sold for less than half the price of Drinker's make.

Emerson's new design replaced blowers and valves with a flexible diaphragm in a dual-layer. This acted as a foolproof: if one layer was torn, the second would continue operation. He also made improvements to the chamber. He made the bed slide in and out of the cabinet and added portholes to the sides,  that allowed access to the patient without loss of air pressure. 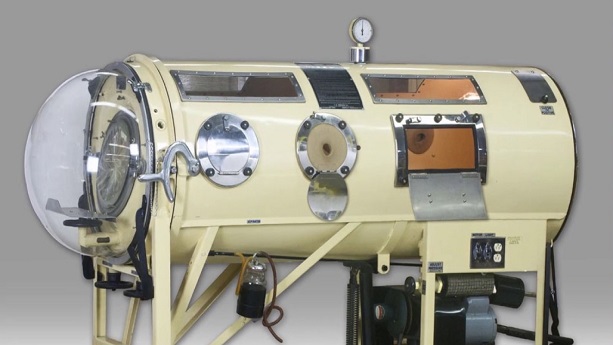 After a while, Drinker filed a lawsuit against Emerson. However, Drinker not only lost the suit, but also his patents were declared invalid. Because the court decided the individual parts used to make the respirator were patented by other people ( according to Mütter Museum Curator Anna Dhody in The History of Vaccines).

Although the mechanical ventilators saved many lives and the improvements led to raising their application within the surgery as well as in intensive care medicine, however,  the negative pressure ventilators were bulky and still needed to be more effective.

During the 1950s, positive pressure Ventilators replaced negative pressure respirators.  In the positive pressure ventilators, the air is pumped into the lungs through a face mask or a tube in the throat. These hand-pumped and mechanical positive-pressure devices also helped patients breathe during polio epidemics in the 1950s and the increasing use of muscle relaxants during anesthesia.

However, since the ventilators have electric motors and there was a risk of explosion in the presence of flammable anesthetics such as ether and cyclopropane, Roger Manley in London, developed a ventilator which was entirely gas-driven and became the most popular model used in Europe. His inventions were an elegant design, and became a great favorite with European anesthetists for four decades, prior to the introduction of models controlled by electronics without risks. 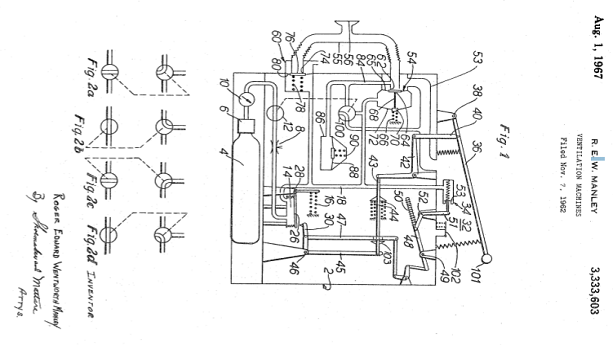 The principle operation of those gas-driven ventilators was very simple; an incoming gas flow was used to lift a weighted bellows unit, which fell intermittently under gravity, forcing breathing gases into the patient's lungs. The inflation pressure could be varied by sliding the movable weight on top of the bellows. The volume of gas delivered was adjustable using a curved slider, which restricted bellows excursion. Residual pressure after the completion of expiration was also configurable, using a small weighted arm visible to the lower right of the front panel. This was a robust unit and its availability encouraged the introduction of positive pressure ventilation techniques into mainstream European anesthetic practice.

Over the past years, many technical aspects of ventilators have dramatically improved with respect to flow delivery, exhalation valves, use of microprocessors, improved triggering, better flow delivery, and the development of new modes of ventilation.

Using the ventilator has brought many advantages to human life and its survival, however,  some side effects of using ventilators have recognized in the 1990 s and later. Before understanding the side effects, the primary goal of ventilation was to correct the underlying blood gas abnormalities and do so as quickly as possible. This could lead to early intubation, more ventilation, and more pressure. However, it was realized that “more” led to more injury. Therefore, some strategies were introduced to minimize the side effects of ventilation and the ventilators are still in development to minimize those bad side effects.

Ventilators as a Key Pieces Equipment in Pandemic  Coronavirus

Around 5% of the patients infected with the disease (COVID-19) need a ventilator to assist them in breathing. Since the coronavirus targets lungs and kills people from severe acute lung infections such as pneumonia and acute respiratory distress syndrome, we see in the news about the ventilator shortage.

According to some top medical device makers, the growing number of patients critically sick with the coronavirus has caused an increase in demand for ventilators to at least ten times what’s available at hospitals around the world.

As the global death toll from the coronavirus crosses 25,000, doctors from Tehran to Milan are desperately seeking ventilators. Hospitals which usually have just a few of the devices now face the need for one per critically ill patient.

Overall in the U.S., the Society of Critical Care Medicine estimates that 960,000 patients would need ventilator support due to COVID-19, but the nation only has about 200,000 such machines. In Italy, the country with the most number of fatalities from the pandemic, a severe ventilator shortage has forced doctors to triage patients.

Ventilator shortage led many companies such as; General Motors, Ford, and Medtronic to ramp up production capacity. However, according to Bloomberg, countries including the U.S. don’t just have a shortage of ventilators; many countries don’t have enough parts needed to produce more.

Ventilators to be manufactured needed many pieces such as exhalation valves, microprocessors, triggering, sensors, and …. The shortage of many pieces is considered as the main issues in recent days. For example, Dutch company Royal Philips NV has informed that it wants to double its ventilator output in the next eight weeks but it had to step in since one supplier in the Philippines that supplies sensors for its ventilators, being on lockdown in that country.

Another key part needs for producing ventilators are circuit board which in the early 2000s, so many production sites have moved to Asia that now there are few in the USA and at the current situation they also have lockdown in their countries or their production limit, cant solve the shortage issue of ventilators.

Ventilators and the Patent Paradox

While for many countries, ventilator manufacturing has been one of the main priorities,  It seems that exclusivity brings by patent, has caused an issue in some cases. For example in Italy; one of the key ventilator pieces was made by an Italian startup using 3d printing. and were used successfully on a ventilator in the patient treatment process.  Those valves could be printed using a polymer laser powder bed fusion process and a custom polyamide-based material. In this method, a laser is used to melt and fuse the powder together to build up layers of an object.

However, the medical company with the patent for that device threatened to sue.

A medical device company has decided to sue a bunch of Italian volunteers who 3D printed valves for $1 due to shortages in supply, which is usually sold by that company for 11,000$

This is a perfect example of how granting an intellectual monopoly in the form of a patent allows almost arbitrarily high prices to be charged, and quite legally.

However, according to the news, It seems that the medical company withdraws its claim against the startup to save lives in Italy in the current situation!