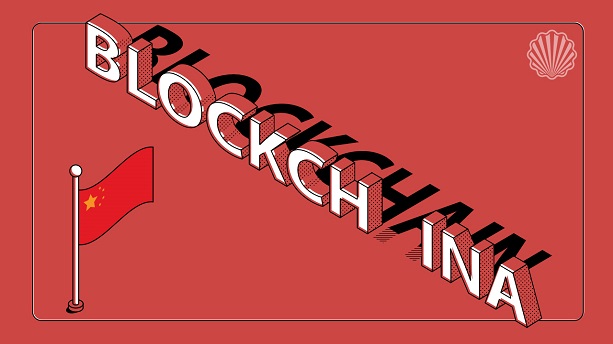 Abstract: Just a few months since China’s President Xi Jinping had made blockchain technology a core focus of the country’s national strategy, there has been a lot of progress on the main blockchain initiatives while China has become a hotspot for blockchain patents.

The ultimate goal is to enable china’s banks and enterprises, as the world leaders in new-breed payments infrastructure with unique features which ultimately could result in undermining the significance of the U.S. dollar as a global trade currency.

According to the latest news, Blockchain Service Network (BSN) for domestic commercial use, launched on April 25, while Digital Currency Electronic Payment (DCEP) is in the advanced testing phase in China.

If BSN works as intended, companies and software developers will be able to plug into the BSN and build blockchain-based applications as easily as assembling Lego sets!  But what makes the BSN lunching news distinguished, is relating to its design that let it to be cross-platform. This means it could support the most popular Western frameworks including Hyperledger Fabric (already supported), Ethereum, EOS, and Digital Asset’s DAML.  In another word, the smart contracts and DApps that already exist in the U.S. can be easily ported and working out-of-the-box on BSN. With this possibility, things like decentralized finance (DeFi) applications and digital asset exchanges will have instant access to convertible assets.

After announcing strong support for blockchain technology Chinese President Xi, analysts suggested that China would soon overtake the United States in dominating blockchain innovations. However, even in the last year, the results of patent research of cointelegraph had shown that China is already winning the Intellectual Property arms race against the U.S.

By scrutinizing the trends, especially in the main patent holders section,  it can be observed that the Cina's giant E-commerce and  FinTech Companies, have filed the majority of patent applications in China.

As Figure 1 illustrates, giant Alibaba and its subsidiary Alipay filed 1505 blockchain patent applications. Close behind it in second place, there is the Chinese conglomerate, Tencent, with 724. 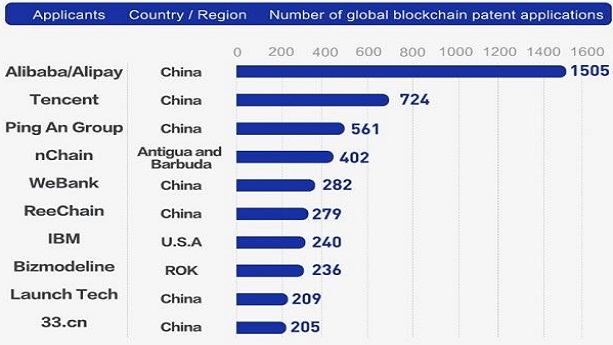 However, China’s leading role in having the most patent applications might be due to some reasons.

For example, policies implemented by the Chinese government that subsidize those who apply for patents would in effect increase the number of applications. Moreover, patenting blockchain application may additional hurdles to show the invention is the patentable subject matter and more than the use of algorithms and the bar for patentable subject matter in China might be not as strict as the USA.

Some experts believe that having the most number of patents couldn’t reflect the real status of innovation of the countries. They believed as the quality of the patents is not considered in the measurement, the number of patent applications It is an imperfect measure of innovation.

Regardless of doubts around patent as an indicator for measuring innovation, it's plain to see that China is in the lead when it comes to blockchain innovation. According to a new report by CB Insights deals in the crypto and blockchain sector have shifted from the US to China over the past year.

Besides, the number of news reflecting the innovative use of blockchain inside China is increasing.  For example, in addition to the other news covered BSN lunching,  more recently on April 29, the news relating to issuance china’s cyberspace commission was published reflecting approvals for 224 blockchain projects, including ventures from the country’s major tech companies.

China’s momentous goal may lie in developing blockchain to help create a digital currency. This digital currency is not a new cryptocurrency like Bitcoin. The technology can be used to verify all sorts of transactions. Unlike Bitcoin and other so-called blockchains currencies, where anybody can join and review the entire transaction record, applications running on the BSN will have closed membership by default. This ‘permission’ setup is much more willing to businesses, which typically want to share transaction data only with trusted partners.

A question raised here:  Why China as a deeply centralized country wants to use an intrinsically decentralized technology?

One possible scenario that represents the most interesting and important, especially for those countries under sanctions by the US, is that China could facilitate a digital currency as a global alternative to the dollar.

Dollar dominate of global trade gives the U.S. a powerful foreign policy tool that the USA uses against individuals and companies, to enforce its policy goals. Almost every global financial institution needs to use dollars, they have to comply. The digital currencies developed by china could upset the equations.

However, the digital currency would allow the government of China to not only harvest the benefits of digital transactions, but also potentially gain a sight at where the money is being spent, and by whom! The BSN Blockchain can be the fundamental of digital currency through tracking and recording transactions, creating a new unit controlled and distributed by the government. The latter could have pron its pros and cons for the public: This leads to limiting money laundering and other current issues. but in contrast, privacy rights in China or political stability worldwide would remain in doubt.

China's goals toward leading in blockchain technology are still uncertain and growing popularity of blockchain technology in china and caused different opinions amongst scholars. Optimistically, China’s investments will spill over and benefit the entire sector. The optimistic believe this global blockchain infrastructure in china will be many national, local, or business platforms that will all eventually come together.”

On the other side, challengers believe China is centralizing a decentralized technology, requiring that all “nodes” using the blockchain register with the government and provide information on their users. This doesn’t achieve blockchain’s goals of privacy and transparency.