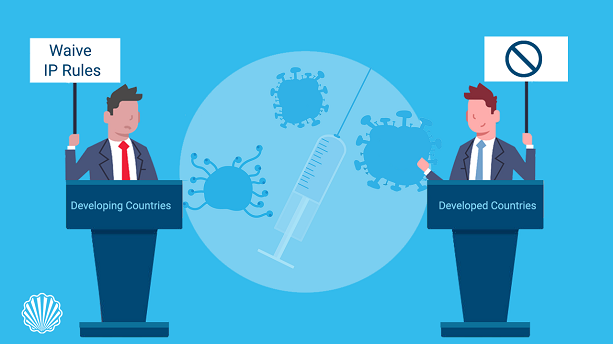 Feb 14, 2021 Disputes between Developed and Developing Countries over the Waiving IP Rules

As the death toll from the coronavirus reaches nearly 2.5 million, countries around the world are competing to vaccinate their populations. However, rising demand and limited supply led them to look for ways to fast pursue this urgent call to action. As a result, many countries have gone to the World Health Organization (WHO)` requesting to temporarily suspend intellectual property (IP) rules related to COVID-19 vaccines and treatments.

The developing countries are concern about big companies exercising a monopoly over new COVID-19 treatments since they have the capability to leverage global intellectual property and patent protections. This is one of the primary reasons for the mounting imbalance in vaccine distribution.

South Africa and India introduced the waiver proposal in 2020 October calling for those protections to be suspended until herd immunity is achieved, drawing the support of more than 100 countries.

The proposal goes beyond the limited flexibility introduced by the Doha Declaration. The opponents arguing that the Doha Agreement is sufficient. However, Doha only addresses one form of intellectual property: patents. But the main issue at the present time is to ensure timely access to vaccines and transfer of proprietary technology to manufacture vaccines locally in low- and middle-income countries.

Wealthy countries where the major pharmaceutical companies located, such as the United States, the United Kingdom, and Switzerland, have constantly suspended the proposal from advancing beyond a council that discusses trade-related restrictions. These rich countries argue that the exemptions would not actually help, since many countries lack the manufacturing capacity to produce the vaccines, and waiving IP rights does not address the manufacturing and distribution capacity problems that are currently obstructing drug supplies. Moreover, they believe such action would stifle innovation.

The developing countries who are backers of the temporary waiver believe that IP rights are deterring the urgent scale-up of COVID-19 vaccine production during growing criticism of the inequitable distribution of shots.

The waiver supporter believe also that such waiving would be a crucial step in righting the imbalance in global vaccine distribution, permitting additional manufacturers to build or convert infrastructure, enlarging production, and increase global demand, particularly for the LDCs!

What Does it all about?

It appears that this waiving is an opportune time for many Low Developing Countries (LDCs) to extend the TRIPS exemptions beyond the COVID-19 pandemic in order to address the many challenges which they face, especially regarding neglected tropical diseases.

A further factor that may make such an opportunity attractive is that there are high rates of return on foreign direct investment in LDCs pharmaceutical, bio-similar and diagnostic markets, this will become a valuable opportunity for generic companies (Estimated 13%). As a result, a generic company could set up its dossiers and manufacturing to service LCDs and scale up as patent expiry happens in other countries.

It should be noted that, regardless of TRIPS measures, many developing countries, especially LCDs do not allow inventions relating to methods of medical treatment, surgery, or diagnosis on the body to be patented, but do allow claims to pharmaceutical products, as well as claims to first medical use and second and subsequent medical use claims.

On another side regarding, the general director of the International Federation of Pharmaceutical Manufacturers & Associations (IFPMA)) on behalf of the proposal opponents has alleged that"demands for a release of patent information relating to vaccines would not increase supply by a single dose in the short term because they overlook the complexity of vaccine manufacture and ignore the extent to which vaccine manufacturers and pharmaceutical companies and developing nations already cooperate in order to ramp up vaccination capacities,".

He has asked the developing countries and international organizations as well to think about the complexity and difficulty of vaccine manufacturing!

Equitable distribution of vaccines and drugs is what the WTO members agreed due to an urgent need. However, WTO members could not agree if an IP waiver was the best way to achieve that.

The pharmaceutical industry claims that in the current situation, there is an unprecedented level of collaboration among companies, including rivals, to ensure safe and swift access to vaccines to people around the globe. They draw attention to AstraZeneca's deal with the world's largest vaccine maker, India's Serum Institute, and Johnson & Johnson teaming up with South Africa's Aspen Pharmacare to produce its yet-to-be-approved vaccine.

In addition, they said German company Bayer has signed up to help produce Germany's CureVac's mRNA-based coronavirus vaccine, and Sanofi has agreed to help rival Pfizer with the production of its vaccine developed by biotech.

What do you think? Do you think the temporarily waiving proposal could improve the situation of developing countries in fast access to vaccines?