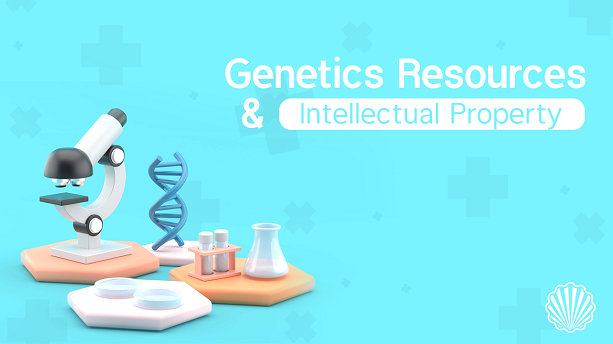 Genetic resources (GRs) are defined in the Convention on Biological Diversity, 1992 (CBD) as the genetic material of plant, animal, microbial or other origin containing functional units of heredity that have actual or potential value. Examples include medicinal plants, agricultural crops, and animal breeds. Some of the GRs discovered through exhaustive research, others were discovered through traditional knowledge (TK).

Genetic Resources Related to Traditional Knowledge (GRTK) is an important issue that could involve developing countries in some aspects, especially the beneficiary aspect! Developing countries are generally the main providers of genetic resources and traditional knowledge. On the contrary, developed countries frequently practice providing modern drugs by using GRTK.

Genetic resources could be the form of seed, which is the basis for agriculture and consequently, thus world food security. Equally, genetic resources could be in the form of medicinal plants and the related knowledge is important inputs for new pharmaceuticals. Traditionally, food crops and medicinal plants have been developed by local and indigenous communities and farmers all over the world.

Researchers, inventors, and manufacturers, normally from developed countries, may use traditional knowledge (GRTK) of indigenous peoples and local communities in their research. For example, they may practice using traditional medicinal knowledge as research, that Leeds to develop novel drugs.

However, most intellectual property rights (IPRs) on seeds and medicines are concentrated in developed countries. This has some disadvantages for developing countries since Ip rights bring exclusive rights for the owner of IP rights which in these cases are developed countries (manufacturers are known as the owner of the medicine and pharmaceutical, as well as seeds, they developed by GRTK).

Why GRTK from developing countries are used by developed countries?

To develop and produce more modern drugs, research and development have an important role for pharmaceutical companies which are mostly located in developed countries.

ethnopharmacology” or “ethnomedicine” is one approach is used by developed countries to reduce the costs.  This means that the use of GRTK could result in more benefits in modern drug discovery and development.

Empirical research has proved that ethnopharmacology has reduced the time and cost of developing biopharmaceutical products. Among the benefits of using GRTK, one is increasing the efficiency of initial screening biodiversity candidates for further examination. For instance, in one research the chances of getting a preliminary hit [3] in plant screening increased from 6% without the use of GRTK to 25% with the use of such resource[4].

The trials and errors from the century’s application of biodiversity resources by communities have been serving as a diverse pool on which biopharmaceutical firms build to develop modern drugs[5].

However, It should be noted to move towards protectionism, most source communities do not have the capacity to independently develop GRTK into modern products and that cause in some case even more troubling. For instance, if source communities could develop their traditional medicinal knowledge into a drug that could be marketed globally, then the restrictions would function in the same way trade secrets help firms develop products while keeping commercially valuable information hidden.

However, in the vast majority of source communities and countries, there is a lack of the financial and human resource capacity to develop GRTK resources into commercial products. On another hand, there are multiple reports sounding the alarm on the very high rate of biodiversity loss[6], and GRTK resources rely heavily on biodiversity.

Therefore, numerous GRTK resources disappearing before being examined for their bioprospecting potential. In other words, a protectionist stance coupled with the lack of capacity in source communities and countries to independently commercialize GRTK results in the under-utilization of this valuable resource. This is undesirable from the perspective of global social welfare because increased access to research input is expected to encourage innovation, not increased restrictions.

How Convention on Biological Diversity (CBD) could help to protect GRTK?

Biodiversity and GRTK resources have significant value, but they increasingly face an alarming rate of loss.  The loss of biodiversity resulted in changes in land use, pollution, climate change, and offensive. To save this valuable resource from vanishing, world leaders worked towards signing the Convention on Biological Diversity (CBD) in 1992. CDB brings two main rights in benefit of developing countries that are rich in GRTK: 1) the recognition that source countries have sovereign rights in their biodiversity resources and 2) the recognition that indigenous peoples and local communities should equitably benefit from the innovations arising out of GRTK resources.

The adoption of the CBD’s Nagoya Protocol on Access to Genetic Resources and the Fair and Equitable Sharing of Benefits Arising from their Utilization (Nagoya Protocol), detailing the ABS and compliance obligations relating to genetic resources, and associated traditional knowledge (ATK), has only fortified this new ethos.

GRs are subject to access and benefit-sharing (ABS) regulations, within the international regime on ABS. However, could developing countries really benefit from their resources?

Most developing countries do not have the capacity to helplessly develop GRTK into modern products. Furthermore, a protectionist stance coupled with the lack of capacity in developing countries to independently commercialize GRTK results in the under-utilization of such valuable resources.

Some of the measures taken by developing countries to protect GRTK

It must be noted that the World Intellectual Property Organization (WIPO) as the main source for addressing various intellectual assets, does not address the regulation of Access and Benefit-Sharing (ABS) of GRs as such.   In fact, WIPO’s work complements the framework provided by the CBD, the Nagoya Protocol, and other related international treaties.

It is worth noticing, since the attendance of an” international legally binding” instrument, is yet to develop, the most feasible thing to do would be to leave the matter in each country’s hands.

The traditional standard IPRs could use for protecting GRTK includes patents, copyright, and trade secret.

GRTK for being protected as patent must meet some requirements; first of all, it must fall within a certain defined scope of patentable subject matter. According to the national law of some countries, invention definition excludes discovery, and most work to develop from/by GRTK could be categorized under discovery division than invention!

"Nucleotide and/or amino acid sequence" is described by a sequence listing that constitutes a discovery in the meaning of patent law. Such sequences disclosed in sequence listings do not provide a solution to a specific problem in the relevant field of technology and therefore do not constitute an invention. In accordance with the product of nature doctrine, such subject matter is not patentable.

Furthermore, an invention to be patented should be novel and having inventive steps. The term “traditional knowledge” (TK) refers to the know-how, skills, innovations, and practices of indigenous peoples or local communities.

In fact, the patent’s claims must typically describe an invention that is new, useful, and non-obvious in view of the “prior art”. Therefore, according to the national law of many countries, GRTK can’t meet the “novelty” and “inventive step “requirements as it has been already known to the public.  With this regard, the inaccessibility of GRTK resources for examining the patentability of inventions developed with them is one of the main concerns regarding claims of biopiracy.

To address this issue, one of the key tools supports have called for is the disclosure of origin (DOO) requirement, which creates an obligation on patent applicants to disclose the origin or source of GRTK they use in their inventive process. Advocates have used negotiations at the international level to introduce the DOO requirements in a few treaties and protocols. However, these proposals have created exciting debates among commentators, scholars, and government representatives. While the requirement could improve the quality of granted patents and help establish a more equitable benefit-sharing scheme, it may also create costs related to legal uncertainty and innovation-deterring burdens.

Defensive protection with this regard could be often linked to registers and databases. For instance, the Traditional Knowledge Digital Library in India, or the database managed by the National Commission against Biopiracy in Peru, operates by providing patent authorities worldwide with reliable information and data which may assist examiners in improving patent analysis and ensuring that wrongful patent rights are not granted. Both India and Peru have prevented many patents over biodiversity or TK-based innovations from being granted as a result of these efforts.

In India also there are Plant genetic resources (PGR) which is the basic materials that are essential for the development of improved crop varieties designed to combine high yield potential with superior quality, resistance to diseases and pests, and also better adaptation. abiotic stress environments.

A trade secret is considered as another tool for protecting GRTK, but it protects only undisclosed information which plays an important practical role in the transfer and utilization of many GRs and GR data, even though these forms of protection often receive little attention.

In contrast to patents, there is no extensive application and examination process, which appear time-consuming for some high-speed innovation cycles based on GR data and their utilization. Other advantages of trade secrets compared to registered IPRs are that trade secrets can be protected for an unlimited period of time and that there are no protection fees based on a registration procedure at a competent authority and for procedural formalities. This does not imply, however, that there are no costs to ensuring trade secret protection, since the costs of implementing reasonable steps for the maintenance of the secrecy of the information can be significant, depending on the circumstances[7].

In the case of working extensive preexisting GR data sets and scientific literature, using copyright becomes important.  When using other people’s copyright material, it is important to ensure that copyright law and any relevant licenses and agreements have been stranded.

Genetic Resources Related to Traditional Knowledge (GRTK) is an important issue that could involve developing countries in some aspects, especially the beneficiary aspect!

The Nagoya Protocol, by helping to ensure benefit-sharing, creates incentives to save and sustainably use genetic resources, and therefore enhances the contribution of biodiversity to development and human well-being. However, the ” international legally binding” instrument is still to develop, the most feasible thing to do would be to leave the matter in each country’s hands.