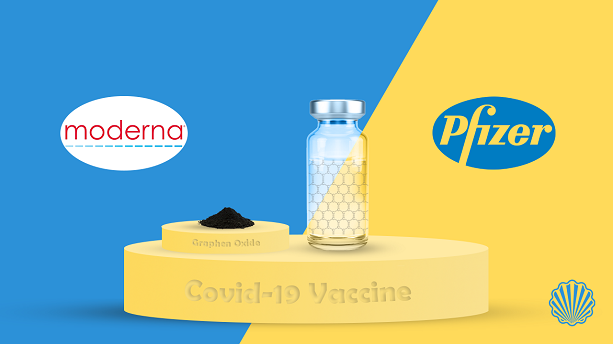 According to some recent allegations by individuals based on so-called scientists' research results, the mRNA COVID-19 vaccines that are currently available in the United States (Pfizer-BioNTech and Moderna) are toxic! According to these accusations, these vaccines have used graphene oxide on their lipid nanoparticles (which assist transport the mRNA within the body)! This is even though graphene oxide is not allowed based on either the FDA or CDC list.

WHAT IS GRAPHENE OXIDE?

Graphene oxide is a “single-atomic layered material” made through the oxidation of graphite. However, this material reduced chemically which result in the creation of graphene which has been described as “the strongest, thinnest and most conductive material on earth”.It can be produced as a powder or a solution for various uses.

Graphene oxide is used in many applications, from sensors to textiles to biomedical applications. This material is cheap, readily available, and can disperse in water. the compound is water-soluble, so it may be a great solution for helping medicines to be absorbed in the body.

Graphene oxide may be a useful tool in vaccine delivery in the future since scientists and chemical engineers believe it can be engineered to be a safe delivery vehicle for vaccines, and help increase their effectiveness. It is worth noticing that graphene oxide as a nanoparticle has recently been used in an intranasal influenza vaccine platform with promising results.

Although this compound can increase the efficiency in multiple biomedical applications including biosensors and drug delivery, it could be toxic to humans in certain amounts. The graphene oxide might cause dose-dependent toxicity, decreased cell viability, formations of lung granuloma, and programmed cell death!  But these results have gained from studies were performed on mice! Moreover, graphene oxide specifically showed no obvious toxicity at low doses or middle doses from .1 to .25 mg in mice. It was chronically toxic at higher doses of .4 mg, where it was found to deposit in the lungs, liver, spleen, and kidneys.

To determine whether the compound would be completely safe for humans and effective for biomedical application, the medical experts said that “many more studies and trials are needed”.

Is This Compound PRESENT IN THE Moderna or Pfizer Vaccine?

Both manufacturers denied the presence of this material in their vaccines. Moreover, it is not listed among the publicly shared ingredients of the vaccines.

According to Reuters and based on the communication Reuters had with these manufacturers, these companies totally denied using this substance in their manufactured vaccines; this material is not present in their vaccines, and it is not listed among the publicly shared ingredients of the vaccines.

What kind of nanoparticles are used in the vaccine produced by Moderna and Pfizer?

Both manufactures used lipid nanoparticles (LNPs) in mRNA COVID-19 vaccines. These lipid nanoparticles are essential “delivery vehicles” that protect the mRNA when the vaccine is injected and transport it to the right place in the cells. They are basically tiny balls of fat used in mRNA vaccines to protect delicate RNA molecules so the vaccine can enter the human body without being destroyed. Lipid nanoparticles have been recognized since the 1960s as potential drug delivery systems. The drug delivery system in fact is an approach to get medications into human cells, especially injectable drugs.

to keep the lipid nanoparticles stable, Polyethylene glycol (PEG), which has a long history of safe use in FDA-approved drug formulations, is used in  COVID-19 mRNA vaccines of these manufacturers. (This is why the term PEG-LNPs may be used. Polyethylene glycol has been listed as an ingredient among the lipids in the Pfizer/BioNTech vaccine)

What Is The Story of Allegations Against These Companies?

On July 28 rumble talk show. a woman introduced as Karen Kingston, a former Pfizer employee, points to documentation on a lipid particle maker’s website which allegedly shows that graphene oxide is present in Moderan And Pfizer products!

The woman in the video points to information on the website of Sinopeg, a Chinese company, which among various companies in the world produce lipid nanoparticles. However, the information she pointed out on that website is about a different PEG (a polyethylene glycol monomethyl ether, not the PEG-LNPs in the mRNA vaccines) that was “successfully grafted to the surface of graphene.”

Contacted by Reuters, Sinopeg said that the company has “never provided any lipid nanoparticles that include graphene oxide” and that the grafted graphene mentioned in this study “is not related to COVID-19 vaccines.”!

It is for an mRNA COVID-19 vaccine candidate, which included “graphene oxide as a carrier” but had not reached the human testing phase.

However, this potential vaccine is among the 184 immunizations that are still in pre-clinical development (based on WHO report), which means it has been tested only on animals (see excel document, find “LNP-encapsulated mRNA encoding RBD” by developer “Fudan University/ Shanghai JiaoTong University/RNACure Biopharma” in the pre-clinical tab).

When Reuters, asked Mrs. Kingeston, the lady who featured in the video, for comments about the result of the communication by these companies, she only encouraged Reuters to ask experts how they could be certain no graphene oxide was in the vaccine but offered no further remarks on the way of the documentation and references in the interview!

Spanish Scientists claimed that that the Pfizer/BioNTech Covid-19 vaccine is around 99% graphene oxide!

There is another claim that got public attention recently in which it was aid that the Pfizer/BioNTech Covid-19 vaccine has around 99% graphene oxide! The way this news was publicized is interesting! An Instagram post by Dr. Jane Rubi included the following statement: “99% Graphene Oxide in Pfizer vaccine! “There’s no other reason for this to be in here except to murder people.” Dr. Jane Rubi said in this video.

The post reference Spanish scientists without giving their qualifications or presenting their data for the scientific community to review.

Other social media publicized such posts have mentioned a “Spanish lab”! The “Spanish lab” may sound more official than the mere scientist, but both are meaningless without more details and explanation.

These so-called Spanish lab findings have not been published in any respectable peer-reviewed scientific journal. According to Health Feedback, a member of the World Health Organization (WHO)-led project Vaccine Safety Net (VSN), there are claims that this Spanish lab is located at the University of Almería in Almería, Spain, yet this university has “plainly distanced itself from the analysis”!

According to Forbes' interpretation of this series of anti-vaccine activities, it would be better to remind ourselves that vaccines are a lot more highly regulated than things like dietary supplements and various foods and beverages. Pfizer could not include a key ingredient, especially one that comprised 99% of the vaccine, on the ingredient lists submitted to the FDA and CDC. Such an omission could put Pfizer at major legal risk and put in danger their entire business. The FDA is conducted periodic evaluations of the manufacturing processes involved in producing the vaccine and is not possible to include an undeclared ingredient for murdering people!