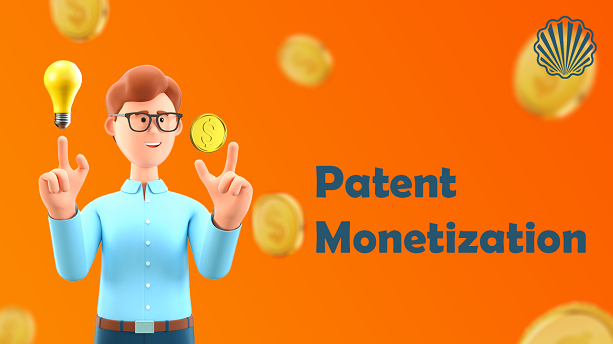 “Monetizing" in general refers to the process of turning a non-revenue-generating item into cash. Patent monetization is defined as the making money or revenue by an entity or an individual via having patents.

Patent monetization becomes of importance when it comes to characterizing the value of an invention. If your inventions and ideas are not generating revenue then it is just a waste of time and capital.

To deal with such issues it is important to come up with a comprehensive, attainable, and practical patent monetization plan, right at the beginning.

Before concentrating on the monetization plan and the steps needed, we should notice that for an effective and comprehensive patent monetization, technical skills, business skills, and legal skills all together are needed. For providing professional patent monetization, all such skills are demanded equitably.

What is a Monetization plan?

The setting goal for monetization is too important for making the best decisions in the further steps.  Goals are very dependent on our core business requirements and whether those meets our business strategy:

§  Organizing and recovering investment in R&D to backing strategic advantage;

§  Ensuring a competitive advantage by holding back a competitor;

§  Being identified as a leader in innovation; and

§  Generating revenue (either by selling, licensing, or enforcing

This step is necessary in the case of having a patent portfolio. Otherwise, this step can be omitted!

If you have a large patent portfolio, the most important step is to identify which technologies in a patent portfolio are likely to be commercially valuable.  It is great to select patents needed to be monetized since they are used with their core business work. The selection of criteria should be well defined in a process calls valuation.

Whether you decided to set the criteria for selecting and valuing your own patnets, or you decide to outsource it to an entity providing this service, you must be carefully considered all necessary aspects. There are some common criteria on the basis of which we can determine which patent should be monetized. Below are some criteria that a business can use:

§  How valuable is the patent?

§  How strong are the claims of the concerned patents?

§  Is someone infringing the patent?

§  Does the concerned patent cover the client’s core or non-core technology?

Understanding the value of either individual patents or an IP portfolio is essential to formulating strategy in the further steps. For valuing patents, forecasting and verifying a patent’s value must be done to evaluate the benefits it offers its owners during its lifetime.

Regarding the previous step, there are some general criteria to determine which patent should be monetized. Below are some criteria that a business can use:

§  How valuable is the patent?

§  Determining the infringing potential of the patent or litigation risk.

There are three dimensions that dominate a representation of portfolio value including:

·        The negotiating potential of the patents themselves, which is comprised of two factors:

·        The economic impact that the patents have when they are used; and

Fundamentally, based on the goals set already, there are four different techniques that patents can be monetized, including:

In the following paragraphs, we briefly define each of these main approaches used for monetizing patents.

Patent Licensing
Patent Licensing in fact is assigning the ownership of a patent to a third party for a specific period of time and in an amount of pre-decided royalties. After licensing, the licensor can make, use and sell your invention either exclusively or non-exclusively.

In this strategy, the patent holder besides maintaining its ownership of the invention could enjoy royalty payment on the product.

In this license type, all the rights of ownership are transferred to a licensee. All the patent owners must unanimously agree to license, for an exclusive license to be valid.

Patent licensing has its own set of unique advantages. Below listed are a few of them:

·        Inventors don’t normally have the time or resources to manufacture or sell their inventions or designs. Licensing provides the opportunity of bringing their product to market without investing the time and resources while still having rights over the invention.

·        It limit the risk if you as an IP owner suppose your idea doesn’t have great potential and licensing would help you to reduce such risks.

·        Patent Licensing is not endlessly. A license is granted for a limited time period. After getting over that time, the IP owner regains the exclusive right.

·        The opinion of licensing patents is known as an appropriate option towards getting the maximum out of these inventions. When you use an IP for developing a business from the ground up, it may take years of hard work but licensing the technology or the patent to an already recognized company can be a great way of getting the patented products in the market faster with no issue at all.

·        Introducing a new product or invention in the market is a risky issue; however, with a licensing agreement the risks are shared among different parties and the IP owner more satisfies since this he became sure of decreasing the risks against disturbing losses.

Exclusive license  definition and its benefits

An exclusive license means no person or company other than the named licensee can exploit the relevant intellectual property rights. In another word,  the licensor for the specified duration of the license, will not grant rights in the same information to any other person.

·        Licensor or the IP owner acquires benefits by receiving a sum that meets the loss of future earnings and pays no heed to the risk of the product not getting to the market or being successful.

·        Licensee benefits from this as he knows that they will be the exclusive receiver of the profits after introducing the product to a market. Limitations of an exclusive license

The IP owner can set certain limitations that control the license, like:

·        Field restrictions-to restrict the licensee to a special field of function.

·        Product restrictions- to restrict the licensee’s use of the IP to a typical class of product.

·        Territory restrictions- to limit the licensee to an exact geographical area.

Cross-Licensing
A cross-licensing is an agreement in which two or more parties allow a license to each other for the misuse of the subject matter which is claimed in one or more of the patents each owns. This type of agreement normally happens between two parties to avoid litigation or to settle an infringement dispute.

For example, a cross-license agreement was submitted between Twitter and IBM in January of 2014. This kind of agreement helps competition by offering freedom to design products covered by the other’s patents without happening a patent infringement lawsuit.

Patent Selling
In this case, the IP owner simply decides that he/she doesn’t want to do the hard work and neither do you seek to keep the rights of the patent through licensing.

Now, if a patent owner seeks to sell their patents, they have two options:

If the patent owner believes he has a patent with high infringement potential, the best choice is simply to get an IP broker involved. An intellectual property broker can be a great aid by serving to attach the inventor or patent owner with one or more interested buyers.

The brokers normally have networks of connections in various market segments which can be used to help market the patent for sale. Industry peers, competitors, entrepreneurs looking to commercialize the technology, but also defensive patent aggregators, and patent licensing companies are present in the potential buyers.

Patent Pooling
Patent pooling is a mechanism by which two or more patent owners come to an agreement to grant licenses to each other or to third parties for their patents.

By “pooling” patents from a number of license holders, licensors mostly are able to moderate minor transaction costs and managerial operating expenses and benefit from a centralized model that backs patent bundling in a fair manner.

Licensees on the other side enjoy returns in the form of lower royalty fees and a single point of contact that reduces the need to discuss separately with multiple license holders.

For example, The patent pool of One-Blue, LLC was officially launched in July 2011 as the one-stop-shop licensing agent for the Blu-ray Disc (BD) industry. It represents 15 licensors from among the world’s global consumer electronics manufacturers, One-Blue works as a pool of more than 10,000 essential BD patents and to date has executed over 72 Registration and/or License Agreements.

For patent enforcement both legal and technical due diligence is required to find out if there is patent infringement has happened: For this purpose, it is necessary to examine whether the patent could survive a challenge to its validity; whether any infringement is proven with claim construction; and whether there are adequate damages to cover the cost of a patent infringement lawsuit. Normally, all these determination is done with the help of an attorney or specialized people having experience in this area.

If you can’t settle negotiations with the infringer then it ends p to the courts. Courts employ a doctrine of equivalents, which means that the invention and the accused product are adequately the same in what they do and how they do it so that infringement should be found.

When infringement is proved, the court directs the infringing parties to pay a determined amount of royalties based on past use along with damages to the patent holder. In some countries including the USA, this process may cost near a million dollars for both parties. The challenging the validity of the patents is a common practice adopted by defendants. If the patents if not strong enough, are likely to bring down or invalidated, causing the patent owner more harm than a penny of gain!

Patent monetization could help businesses and individual inventors to make a significant amount of revenue. Monetizing a patent requires a deep understanding of assets than the value you as an owner, think you know about your assets. After knowing the status and value of your patents, you can make better decisions in choosing approaches that might lead to monetization.