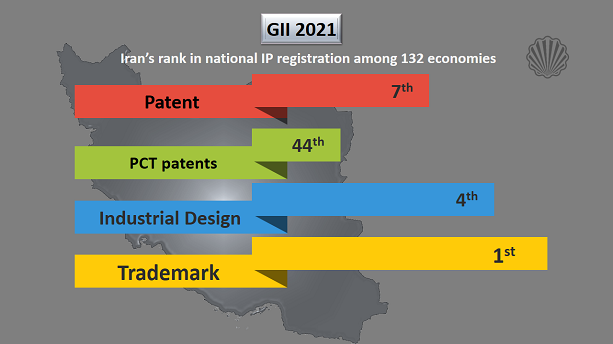 The Global Innovation Index (GII) is an annual ranking of countries, categorizes world economies according to their innovation capabilities.  The GII is a leading reference for measuring an economy’s innovation performance. The ranking is done by capturing elements of the national economy that enable innovative activities.

The GII is based on both subjective and objective data derived from several sources, such as the World Bank and the World Economic Forum. More than 80 indicators are used in GII to explore a broad vision of innovation, including political environment, education, and infrastructure, and business sophistication.

The GII 2021 with a theme of “Tracking Innovation through the COVID-19 Crisis?” considers how innovation as integral to overcoming the common challenges caused by COVID-19 could constructing a better future. According to Daren Tang, the WIPO Director General, “The Global Innovation Index is a unique tool to guide policy-makers and businesses in charting plans to ensure that we emerge stronger from the pandemic."

The GII 2021 which was released on September 20, reveals that in spite of the human and economic toll of the COVID-19 pandemic, governments, and enterprises in many parts of the world have increased their investments in innovation. Scientific output, expenses in research and development (R&D), IP registration, and venture capital (VC) deals continued to grow in 2021, building on strong pre-crisis peak performance.

The majority of the GII top 25 most innovative economies continue to be from Europe. However, five Asian economies feature among the top 15 – the Republic of Korea (5th) and Singapore (8th) are in the top 10, followed by China (12th), Japan (13th), and Hong Kong, China (14th).

The middle-income economies are changing the innovation landscape, starting with China, Turkey, Viet Nam, India, and the Philippines that have had great achievements during the last decades. Interestingly China is known as the middles income economy that has remained remains among the top 30 most innovative economies globally.

According to this year's GII analysis report, beyond China, four middle-income economies including Turkey, Viet Nam, India, and the Philippines have the potential to change the global innovation landscape for good.

Iran, as one of the developing countries that are eager for economic growth and industrialization, understands the importance of innovation and has moved forward in recent years. Iran, which was ranked 67th in GII 2020, is one of the countries with the highest growth in GII 2021 as it has been ranked 60th in GII 2021.

The reviewing of the GII report since its beginning indicates that innovation in Iran has developed rapidly over the past five years and the development of accelerators and innovation centers over the last five years has led to a rapid increase in startups and knowledge-based companies. 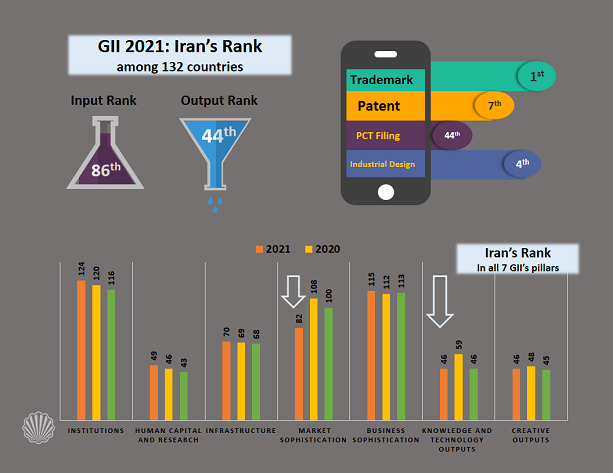 Figure 1: An overview of Iran's ranks: Its input and output ranks; ranks in national IP assets registration (in terms of per capita GPD), and comparison of its rank in each seven GII pillars during 2019-2021.

In the GII 2021, Iran ranked 60th  among 132 economies with a score of 32.9 out of 100. Iran has been ranked second among 10 countries in the Central and South Asian region following India.

Iran with 2 step jumping, ranked 41rd among the 100 most vibrant clusters of science and technology (S&T) worldwide while during the last three years, it has kept is 43rd place. It might be interesting to know that the top 100 clusters are located in 26 countries, six of which including Brazil, China, India, Iran, Turkey, and Russia represent middle-income economies.

In the human capital and research pillar, Iran in GII 2021 ranked 49th while last year in GII 2020, Iran was ranked 47th. Interestingly, in the graduate science and engineering section of this pillar, Iran kept its position in 3rd place in the world.

On the whole, in the education, and research development sections in this pillar, some significant progress in the ranking has been achieved. For instance, in the research and development, Iran has remained in its last year place (48th).

Iran has a young, motivated, and educated population, which has led the country to have a wonderful situation in human capital and science production and the potential of the country to develop technology and innovation to upgrade its current situation. However, achieving this aim needs upgrading other infrastructures as well.

In the "tertiary education" section, Iran’s rank is 9th while it was 7th in the GII 2020. The significant point in the GII 2021 about Iran is Iran's persistence in the path of science production. The fact that the situation of the country has improved in the indicators related to scientific publications, higher education, registration of intellectual property, and industrial production at the international level.

Iran’s ranking in Knowledge & Technology output pillar was improved significantly compared to GII 2020.; Iran’s rank was 59th while in GII 2021 its position back to its 2019 rank ( 46th).

In the "knowledge creation" section concerning this pillar, significant progress is observed; the knowledge creation of Iran has been ranked 14h among 132 countries while it was 25th in GII 2020 and 32nd in GII 2019. In the above-mentioned section, the number of scientific publications and articles in terms of per capita GPD, ranked 11th, while it was 21st in GII 2020 and 27th in 2019. Moreover, in the knowledge impact, some small progress is observed. For instance, in software spending (based on % GPD), Iran’s rank is 38th, while in GII 2020 in this section was 58th in the list.

In the "Science and Technology" cluster, Tehran with a two-ranked increase over 2020, has been ranked 41st in the list of top 100 cluster rankings. In this point, Iran surpassing Brussels, Frankfurt, Berlin, Zurich, Madrid, Barcelona, Milan, Rome, Istanbul, Austin, and other big main cities of the world.

Iran has significant achievements in the Market Sophistication pillar as its rank, improved considerably from 108th in 2020 to 82nd in GII 2021. In the “investment”, and “trade, diversification, and market scale” sections, Iran’s ranks have significantly risen as it has jumped to 85th and 71st while in GII 2020 Iran’s rank in these areas was 115th  and 107th, respectively.

Regarding the "domestic market size" indicators in the market sophistication pillar, Iran has an appropriate ranking, while the country is ranked 25th and is placed among the moderate and high-income economies. This could show the availability of the large domestic market for technology and innovation and implies the very high potential capacity of the country's domestic demand for innovative production.

One of the most important strengths of Iran either in GII 2021 or GII 2020 is indicators relating to Intellectual property. Iran kept its ranking in intangible assets as 13th which is considerable and could imply the importance of IP assets in Iranian society. With this regard, Iran in 2020 and 2021 is ranked 1st in “the number of applications in terms of national trademark registration among 132 countries which is a significant achievement. 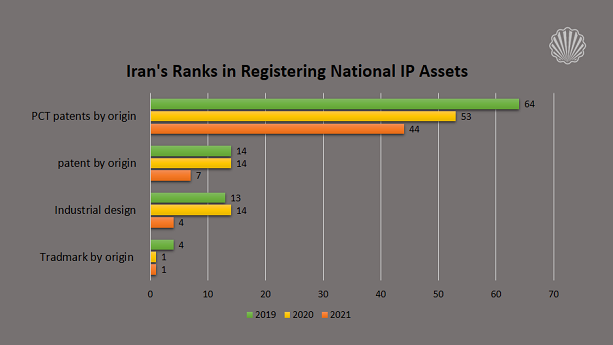 Figure 2: Comparison of Iran ranks in registering  national IP assets (in terms of per capita GPD) during the past three years (2019-2021)

Iran ranks 1st in “the number of applications in terms of national trademark registration, 4th based on the registered industrial design and 7th based on its registered patent application among 132 countries.

Although Iran joining the Patent Corporation Treaty (PCT) occurred lately (2013), however, Iran has significant growth based on its PCT patent registration (in terms of per capita GPD). Iran ranks in GII 2021 is 44th while in the GII 2020 report this rank was 55th and in GII 2019, Iran’s rank was 64th.

According to the Statistical Profile of Iran at WIPO, 299 international applications were filed in 2020 via WIPO Administered Treaties, 283  of them, were registered as a patent application via the PCT system; 16 trademark applications through the Madrid system.

Kanoon IP, alongside becoming the main active entity in promoting Intellectual Property inside the country, has been nominated as the most active body in supporting inventors/innovators overseas protecting their inventions. To date, Kanoon IP has supported the drafting, filing, and prosecuting of nearly 450 patent applications outside the country which many of them has filed via the international phase of the PCT system. Therefore Kanoon IP has a significant role in raising Iran’s rank in the GII 2021 with its direct impact on PCT filing as well and its indirect impacts on building national  IP capacity and registering national IP assets by its extensive promotional activities.