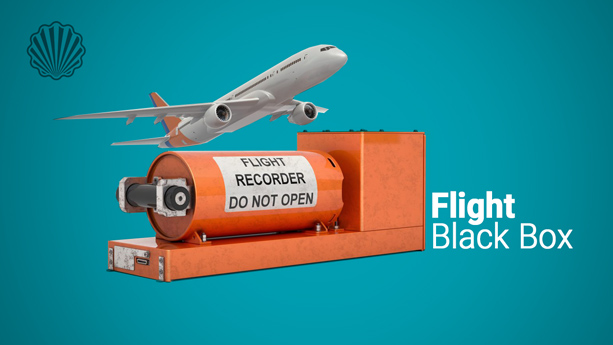 From a long time ago, fly in the skies was one of humanity's great dreams, which was realized in the first years of the twentieth century, through the invention of the Wright brothers. The airplane is an example of creativity, curiosity, and innovation that has completely transformed the transportation industry as a result of its development and commercialization.

Over the past century, the airline industry has continued to grow and evolve, resulting in the design and construction of various types of commercial aircraft, by famous brands like Airbus and Boeing, fighters, as well as advanced drones for military purposes, commercial uses and so on. Along with the impressive advances, there are occasional reports of a plane crash that happened somewhere in the world. Aircraft accidents, which are rare at the same time, can lead to significant loss of passengers’ life.

You may have followed the news of the plane crash on TV, Finding the BlackBox of an airplane and determining the cause of the accident or the final moments before the plane crashed is one of the most common issues in such cases. Have you ever wondered what a BlackBox is and why it is so important? Where did the idea of installing the BlackBox on airplanes come from and who invented the first Blackbox? What was the prototype BlackBox like, and what has it changed since then?

One of the earliest attempts of developing the flight data recorder was made in France in 1939 by Francois Hussenot and Paul Beaudouin which even led to pre-production. In 1947, Hussenot established a company to market his invention, known as the "hussenograph", which used not only for aboard aircraft but also for trains and other vehicles. The company is currently active as part of SAFRAN Group Holding and offers its products as equipment for the practical test.

Another form of flight data recorder was developed in the UK during World War II. Len Harrison and Vic Husband developed a recorder device to keep the flight data. At the end of World War II, they assigned their invention to the British Ministry of Aircraft Production, administrator of construction and production of aircraft, and it obtained patent NO."19330/45".

Despite the efforts in many different countries, David Warren is an Australian scientist who invented the BlackBox. The aircraft's BlackBox refers to Cockpit Voice Recorder (CVR) and Flight Data Recorder (FDR). David Warren played a key role in the invention of CVR and the development of FDR, both of which made air travel safer and the cause of accidents more understandable. He had a very personal reason to invent; His father was killed in a plane crash in 1934 in Australia and that was the motivation for his decision to find the cause of aviation accidents.

Warren was born in 1925 on an island off the northern coast of Australia and His father, an Anglican missionary, was killed in an unsolved plane crash when David Warren was just nine years old. After this impressive event, David studied at the Universities of Melbourne, Sydney, and received a Ph.D. in chemistry from Imperial College London. Interestingly, Warren's interest in electronics was kindled by the gift from his father of a simple crystal radio, just prior to the accident. However, at the outbreak of the war and radio access problems, Warren shifted his focus to chemistry.

In the 1950s, Warren conducted several small studies related to the sound recording and related equipment while working on aircraft fuels at Aeronautical Research Laboratories (the Australian Defense Industry). However, several successive aircraft crashes and related news have made the idea of recording the flight information more serious. He believed that it would be very difficult to determine the causes of accidents without recording devices.

In the same years, there were a series of plane crashes (Havilland Comet plane) that government officials were desperate to find out the cause. It was the world's first passenger jet airliner, designed and built-in 1949, and by 1956 had experienced several accidents. Prime Minister Winston Churchill stated: "the cost of solving the Comet mystery must be reckoned in neither money nor manpower.” In addition to these efforts in the UK, the earliest sound recording devices were introduced at trade fairs and Warren, given the German equipment, wondered what valuable information would have been available to the authorities if such a device had been present on the Comte aircraft.

Warren had an idea for a unit that could record flight data and built a prototype FDR called "The ARL Flight Memory Unit" in 1956. However, in 1954, he published an article describing the theoretical foundations of the idea. The device, which recorded up to four hours of flight data as well as cockpit voice, was not noticed by Australian officials, and even Royal Australian Air Force said in a disappointing way: "device records flight conversations," And that has raised concerns among Australian pilots about spying and surveillance abuses. However,  the innovation has been appreciated by the British and over time, it became a very important standard not only in Britain and Australia but also in the United States and the global commercial aviation industry. In 1958, a British official named Robert Hardingham, a former employee of Havilland traveled to Australia and immediately recognized its potential. He was given a demonstration of the prototype in the UK and in the following years, Warren's innovative device was commercialized by the British company "S. Davall and Son”.

It's also interesting to know how Warren’s device came to be known as the black box, considering that the color of Warren’s prototype was closer to red or orange which was named the "Red Egg" because of its shape and bright red color by S. Davall & Sons Ltd. In this case, there is some dispute, But it is believed that the steel cover needed to protect the box or the public's belief in the enclosure records data has turned the term "black box" into an acceptance. In a 2003 Australian interview he explained:

"I had seen, at a trade fair, a gadget which fascinated me. It was the world's first miniature recorder to put in your pocket. I put the two ideas together. If a businessman had been using one of these in the plane and we could find it in the wreckage and we played it back, we'd say, 'We know what caused this'."

He passed away on July 19, 2010, at the age of 85, but his invention, as the main source of information for aircraft, records conversations between the pilot, altitude, speed, and so on. Interestingly, car manufacturers have recently considered designing and building a black box that could lead to the evolution of David Warren's original idea.

It should be noted that Warren never directly profited from his invention. Despite intense competition for the patent in various countries, he never filed for a patent for the device, but Warren was awarded one of Australia’s highest civilian honors, becoming an Officer of the Order of Australia in 2002, due to his contributions to the development of the flight recording system.

It should be noted that a wide range of inventions has been patented on the subject of recording devices, including a patent called "Flight Recorder" with NO. "US 2959459". The invention was patented in the United States by Professor James J. "Crash" Ryan, a professor of mechanical engineering at the University of Minnesota, and was filed in August 1953 and approved on November 8, 1960. James Ryan is one of the inventors who played a key role in the development of the aircraft BlackBox in the United States and owns other patents, including the patent NO."US 3075192". Edmund A. Boniface is another key player in the development of flight data recorders in the United States, and his invention, called the Cockpit Sound Recorder, is one of the most important innovations in the field (patent NO." US 3327067").