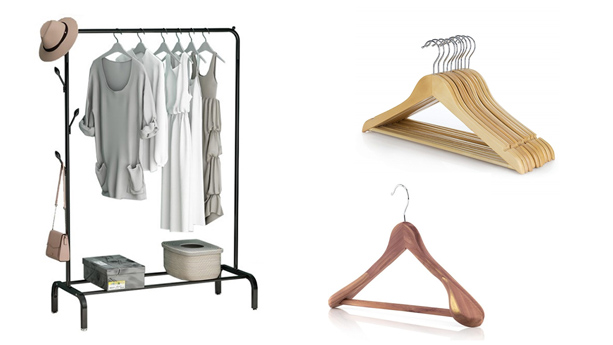 When it comes to inventing, everyone expects a highly advanced device that has had the biggest impact on humanity and completely changed an industry. There are many examples of such inventions and innovations, including the light bulb invented by Edison, the telephone invented by Graham Bell, and the airplane invented by Wright brothers. However, not all inventions are complex and some brainy inventors and scientists have invented a simple device or process to solve a small problem around them. By looking around, you can see many examples of these inventions, from the invention of traffic lights and adhesive tape to the invention of chewing gum and sewing machines.

To better understand the issue, look at your wardrobe for a moment. A set of different clothes side by side that are hung on the hangers, without any wrinkles on them. Imagine that there were no hangers and you had to stack all your clothes on top of each other. Given the delicate fabric of today's shirts, you probably had to iron everyday clothes and maybe such delicate fabric had not been produced at all!

Coat Hanger seems to be a very simple and obvious invention that does not consist of any electronic equipment or even a mechanical movable piece. Its shape and form are quite elementary. But could we organize our clothes without a Coat Hanger? Who designed and invented the hanger and how? What has been the evolution and development of coat hanger? In this article, we will review the history of this widely used invention.

Many people believe the first coat hanger was invented together by prolific inventor and third president of the United States, Thomas Jefferson. But studies show that the original coat hanger has been attributed to a little known man, "O.A. North" of Connecticut in the USA in 1869. The final hanger was created by Albert J. Parkhouse of Michigan, who inspired by North's idea to solve the problem of his colleagues, designed a new coat hanger in 1903.

Albert J. Parkhouse, an employee of Timberlake Wire and Novelty Company, invented the coat hanger in response to co-workers' complaints of too few coat hooks in an office closet. He chose a piece of strong wire and bent a piece of wire into two ovals with the ends twisted together to form a hook. However, there is another story of the idea of creating a hanger that inspired House. The second version is that Parkhouse arrived to work too late and find out that all coat hooks were taken. Parkhouse did not like having his winter coat getting wrinkled on the back of a chair all day. So many wires were available, due to the production of wire in the company. His new wire creation allowed him to hang his coat anywhere.

Gradually, all of the employees realized the application of coat hanger and were using hangers created by Parkhouse. The company found out the commercial potential of this idea and they applied for a patent for the invention. The story of the Parkhouse's coat hanger is one of the most interesting and rare examples among various inventions. Because the hanger was created at work, the rights of a patent owned by Timberlake Wire and Novelty Company. They hired a lawyer, Charles Patterson to file the coat hanger in the US patent system. So far, it is similar to many patent stories, except that the application was filed through the U.S. Patent and Trademark Office by Charles Patterson who named himself as the inventor. on June 12, 1906, the patent (NO.US822981) granted to the Timberlake Company after the examination by USPTO. 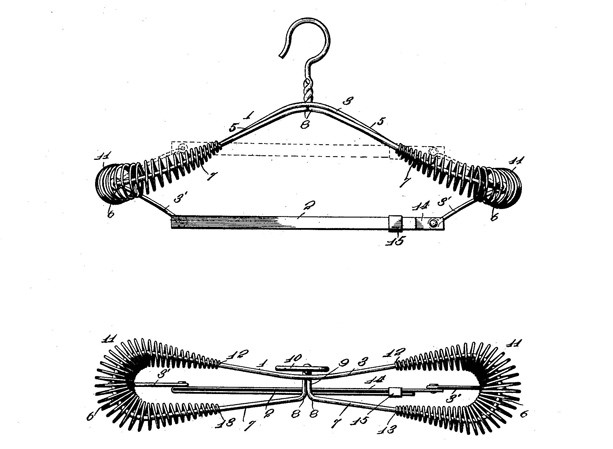 Since then, various changes have been made to the design of the Parkhouse other patents were granted for different versions of coat-hangers, including the invention of a bone hanger to hang the products by a retail store in the United States, in 1906; this is the first experience of using hangers in businesses. Schuyler C. Hulett created an improved design, which used cardboard tubes mounted on the upper and lower parts of the wire to prevent wrinkles. He filed the invention on June 15, 1931 and about a year later, in November 1932, the patent (NO.US1885263) was issued by the US Patent and Trademark Office.

It should be noted that patent analysis shows that at the end of the 19th century, GE Rideout filed an application entitled "coat hanger" on May 26, 1896, and then received a patent with "NO. US586456". But what role the patent played in Parkhouse ideation and whether its inventor enjoyed the benefits of its patent is an unanswered question. What is clear is that the invention of the coat hanger has been credited to Albert Parkhouse who had not been able to benefit from his invention. According to Gary Mussell, great-grandson of Parkhouse, the invention of the coat hanger was something special than a product invented at work and owned by the employer but because of the traditional employer-employee relationship in American business, especially at the end of the 19th century, didn't bring any revenue to Parkhouse and as well as to well-known inventors such as Thomas Edison, George Eastman and even Henry Ford.

It is worth mentioning that the history and evolution of coat hangers in the last century indicates that has become an essential item in homes and many shops. different types of clothes hangers' designs, due to the general use of it, have been created which have different functions for different conditions.