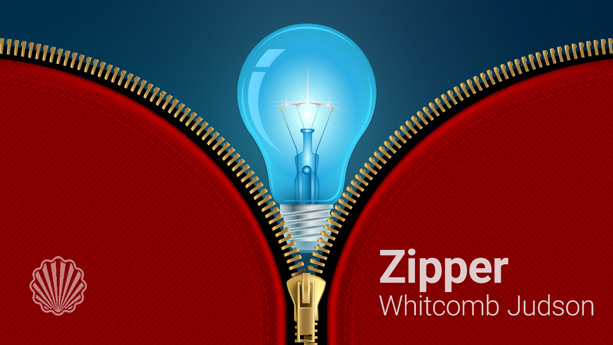 Human inventions and technologies have shaped civilizations and transformed life on Earth. No one can even imagine the world without inventions. Think for a moment that the airplanes were not invented and you had to use the car or even animals to travel to another city or country! Although at the present we can’t imagine the world without the airplanes, not so long time ago, this situation was quite normal and flying in the skies was just an ambitious idea and an impossible dream.

The Wright brothers' innovative aircraft, Graham Bell's telephone, and the light bulb by Thomas Edison are examples of famous human inventions. But it should not be forgotten that facilitating today's processes and making life easier is not limited to these great inventions and there are some smaller inventions that life without them looks difficult. A simple example is the "zipper", a relatively simple mechanical invention that is used everywhere; every day.

The use of the zipper had become common in everyday life in a way that you may not even think about how this insignificant device was invented, and what was the story behind the invention and its development.

You may open and close the zipper of your pants or jacket, or pull the zipper (of boots) up and down to make it easier to put on and take off. You may also use a zipper to close covers or zippered nylons in food storage.   There are some zippers in your briefcase or backpacks and even your wallet. Take a closer look around to see how common and necessary they are in your life.

At first glance, the zipper is a simple mechanical device that exempts us from closing the button, tying, and so on. This unique invention, like many other inventions, first identify a need or problem and had been developed by creative inventors around the world to its present form.

In 1851, Elias Howe received a patent for an "Automatic, Continuous Clothing Closure". But the sewing machine has become so popular in business that he practically withdraw his other innovative ideas, including the continuous closure and he did not try seriously to market it. In other words, this continuous closure remained just an idea and the decades later, another inventor developed it.

More than forty years later, the American, inventor Whitcomb Judson created a device similar to Elias Howe's patent and registered it with the United States Patent and Trademark Office in 1893. the patent "US 504037" was granted on August 29 of that year.

The Aha moment of this invention has its own interesting story behind.  In those years, long leather boots were popular and Judson, who always wanted to be fashionable, spent a lot of time on closing and open the button of his boots. One day he thought how good it would be if these buttons did not exist. This sparked his creativity and finally, a zipper fastener device was invented, which was called a "clasp-locker".

Judson had invented the zipper for personal use and practically became free of his boots opening and closing buttons. Two years later, he teamed up with salesman Lewis Walker to display the invention at the World's Fair held in Chicago but the invention was not properly welcomed. He could sell only 20 of the fasteners to postmen, who need the zipper to easily and frequently open and close bags full of letters during their daily work.

Many years passed and Judson passed away in May 1909. However, this simple creative mechanical device, which was not well-received attention, paving the way for the design and production of one of the most important inventions and innovations in the sewing industry, which had made use of other technologies.

one creative inventor, Gideon Sundback improved Judson's work, making the zipper practical and commercially successful. Sundback worked at the Universal Fastener Company where his design skills were improved. Good design skills and marriage to the factory manager's daughter, Elvira Aronson led Sundback to the position of head of the designing department at Universal. After the death of his wife in 1911, the grieving husband involved himself hardly at the design table and finally, in December 1913, he had designed the modern zipper.

The Sundback made changes to Judson's old zipper, replacing the eyelets and hooks with small teeth that locked together. The moving the slider on the teeth puts the pressure on them, causing the teeth to lock together. On the other hand, the reverse motion of the slider made it possible to open the teeth. He increased the number of fastening elements from four per inch to ten or eleven which greatly increased the strength of two facing-rows of teeth. Sundback filed the patent application in August 1914, and in March 1917, a Patent Number "US 1219881" was granted.

The first innovative zipper of Sundback was marketed and due to its successful experience in the sewing industry, especially in men's trousers, attracted the interest of the US Army. The first big customer was the U.S. military, which used zippers in gear and uniforms and the commercialization of the invention was practically successful.

One of Sundback's challenges was that his invention was unknown for people. Although the way the zipper works is clear to everyone today, at the time, it was an unknown invention and was considered strange. People preferred the traditional methods (like buttons) and that made it difficult for Sundback. A shoe manufacturer and industry activist, thanks to his open-minded and forward-thinking mind, understood the advantage of Sundback's innovative zipper. In 1913, B. F. Goodrich, a large footwear and plastics company ordered 150,000 zippers and decided to use Sundback’s invention on their new rubber boots; this was an important turning point in the commercialization of the zipper.

It should be noted that the US military had already given large orders to Sundback, but Goodrich's order led Sundback to launch of his products line, and this made the new invention familiar to people.

By the introduction of zippered shoes that were easy to open and close, it gradually attracted people's attention. Goodrich gave a one million order to Sundback and in fact, a very successful collaboration took place between two parties. This win-win collaboration, on the one hand, increased sales of Goodrich products and, on the other hand, was powerful and effective marketing for Sundback.

For nearly two decades, zippers were used only for boots, clothing, and tobacco packages until in the 1930s, in which an American businessman decided to use zippers in children's clothing as well. This decision increased the reputation of the zipper, as children could easily put on their clothes without the help of parents.

Less than a decade later, another turning point occurred in the development and improvement of the zipper. In 1937, French fashion designers were amazed by the zipper function in men's trousers and Esquire magazine declared the zipper the "Newest Tailoring Idea for Men." Since then, the zipper has widely been used in different clothes through the development of its functions in other industries, today, from suitcases and camping tents to leather goods and medical and industrial boxes.