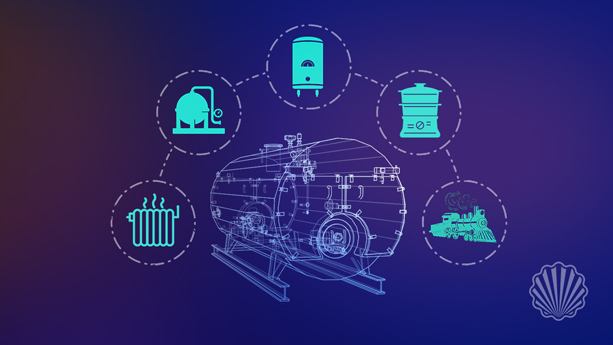 Have you ever heard the name of boilers? Do you know to what extent this invention has been effective in the development of steam power and consequently in various industries, especially the energy industry?

Evidence reveals that most people have never seen a power plant closely, and therefore no proper understanding of the history of steam power and how it came into being. However, the issue of the energy crisis is a serious and challenging issue in today's world.  To better understand the depth of this ignorance, it is enough to ask about the invention of the automobile and the automobile industry from a number of friends and people. You will probably hear names like "Henry Ford" and "Carl Benz" from them. However, you will find few people who know about the inventor and pioneer of the steam power industry. You might justify this in a way that the car has had a critical role in the formation of modern societies and the all-around development, but a little research shows that steam power was just as important, and perhaps even more so.

The steam power industry began with the invention of the boiler, developed by George Babcock and Steven Wilcox. However, the history of the use of steam power goes back to the late eighteenth century. At that time, some primary vessels were used to boil water. In 1867, the boiler was born to create one of the most key industries in human development.

George Babcock and Steven Wilcox, who were pioneers in the steam power industry, joined each other and collaborated in the early 1860s. The result of this collaboration was the introduction of an efficient and optimal boiler to the market, which in addition to enhancing the heating levels and generating more power, had sufficient safety as well. The idea however was based on a previous innovation by Wilcox and an inventor named O.M. Stillman, who in 1865 received a patent for it. However, there is almost no debate among historians as to whether Wilcox and Babcock were the original inventors of the boiler.

What is a boiler and how does it work? The boiler is a box consisting of various pipes. The boiler uses fire inside the box to heat water and turn it into steam. Various bricks, refractory materials, and insulation were used around the pipes as well as the fire chamber, to prevent heat from spreading out of the system. The number and size of pipes, the type of fuel, and the total dimensions of the boiler will also vary, depending on the type of boiler design and the industry used.

Babcock and Wilcox, as the inventors of the boiler, set two very important plans. They first registered their valuable patents with the US Patent and Trademark Office. Which resulted in a patent number "US 65042" on May 28, 1867. In their second smart move, they moved the rapid commercialization of technology and, with the help of Joseph P. Manton, founded Babcock & Wilcox Company to manufacture and supply boilers. Launched in 1867, the company is known as the first global energy leader, designer, and manufacturer of the world's water-tube boilers.

After introducing these boilers and their high receipt for power supply, several companies gradually began to operate for the production and distribution of power in the regional market. The situation was such that each city had its own facilities. The big challenge was that in the big cities, due to the limited steam pressure from each boiler (on average approximately 50,000 pounds per hour per boiler), a large number of boilers had to operate and, as a consequence, a large number of companies in charge of them. Therefore, managing this situation was difficult. Interestingly, even some large companies and industries had their own boilers, such as Eastman Kodak, which was active in the production of film and cameras, and "The Box Board Company", which provided the boxes needed by grain companies.

These boilers, sometimes referred to as brick-faceted boilers as they had made of bricks, were the first generation and starting point of the evolutionary cycle of boilers. Due to limitations on the size and capacity of these boilers, supplying the required power was not easy. For example, as the size of the boiler increased, the inlet heat of the furnace, tank pressure, and boiler temperature also increased, and as a result, the temperature of the bricks rose sharply. These three factors (heat inlet, pressure, and steam temperature) had a direct impact on the development of boiler furnace and, to a lesser extent, led to higher boiler heights. It seemed that a new innovation was needed to replace the bricks in the ​​boilers. The market needed a boiler having thermal efficiency and energy production, as well as increasing the rate of steam production and reduce its manufacturing costs

Engineers' efforts to solve the challenges in the early 1920s, led to the design of a new type of boiler called the "Tube & Tile Boiler". The design of these boilers was such that large walls with long pipes were places far apart, which could help to reduce the temperature of the brick surface. It was an absolutely different design, and unlike the original boiler design, which used 22-inch-thick refractory brick walls, it was made of thin tiles (2.5 inches thick) or refractory bricks (4.5 inches thick) to hold fire inside the tanks.  With this technological advancement, the boiler industry began to grow, and in practice, the capacity and size of boilers became quite diverse according to the needs of the industry,.

During this period, large companies were engaged in the manufacture and supply of boilers, the largest of which was the companies "Babcock & Wilcox" and "Combustion Engineering".

It is worth mentioning that another turning point of the steam power industry was the design and production of power plant boilers by "Babcock & Wilcox", which, along with the previously designed boilers, they adjust the design the boilers to apply in various application, such as oil and gas industries.

Over the past century, the industry has undertaken many changes and has experienced various innovative developments according to environmental conditions and market needs. Perhaps one of these unique innovations is the design and construction of waste and recycling bins in the early 1980s, which was planned due to the growing cost of landfills and agricultural waste and the Regulatory Policy Act of 1978. Waste, wood, and biomass boilers are a type of boiler with the same function as industrial boilers, which, of course, due to the type of material and residues of non-recyclable materials that cause corrosion of boiler walls, need a careful and intelligent selection of refractory material for furnace walls!