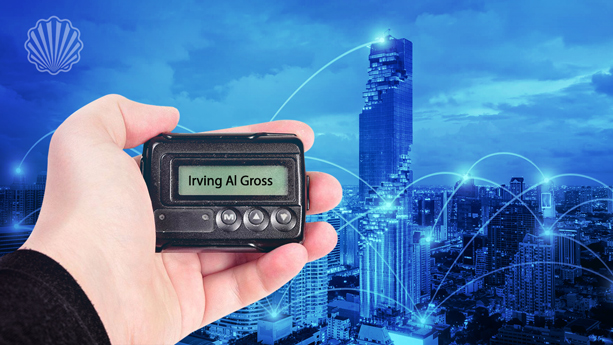 A pager is a small telecommunications device that receives or transmits (in some cases) alert signals and/or short messages. According to the evidence, the system was used by the Detroit City Police in 1921 for the first time although there was an essential need to improve and develop the early version.

This type of device normally is convenient for people expecting telephone calls, but who are not near a telephone set to make or return calls immediately. In 1949, the first telephone pager was invented by a man named Irving Al Gross. He used his device at a hospital in New York and, after making sure it was working properly, began efforts to it develop and commercializing. In order to protect his invention, Gross filed several patents in USPTO which were issued including US Patent No. 2760056 and US 2698380, in the mid-1950s.

Despite the good performance of this invention in a New York hospital, it took almost a decade for this product to hit the market. The main reason for this delay in commercialization was the FCC's review of its use as a public authority and approval, which lasted until 1958. According to the review, the pager was recognized as a safe and efficient technology for important emergency communications between police officers, firefighters, and medical professionals.

How this Communication Tool was named “Pager”?

Motorola developed a product for personal radio communications in 1959 and named this product as "Pager", and in practice, the term "Pager" was formed with the same product in the public mind. In the following years, Motorola developed and improved its pagers, and in 1964, launched its first successful messenger, Pageboy 1. This product did not have a screen, and it was not possible to store messages. However, the portability and the ability to adjust the type and amount of sound for the user's awareness led to its acceptance by users.

Primary pagers generally did not have a large antenna network; At the beginning of the 1980s, there were only 2.3 million pager users worldwide. In fact, the pager was a technology with a limited scope of use that could only be used in local situations. Motorola's next innovation, which helped pager to some extent, was the development of devices with alphabetic displays that allowed users to receive or send messages over a digital network.

These developments led to an increase in Pager network users, where more than 22 million users were achieved in the early 1990s. With the growth of antenna coverage, in a short period of time (1994), pager network users reached 61 million. In this period of time, the pager was not used only for emergency communications, but instead, it was practically a popular means of personal communication. Users could send any number of messages, from "I love you" to "Good night" to their friends and family in the shortest time, and this meant a big change in social communication.

However, with the development of knowledge and technology, the rate of replacement and decline of previous technologies has increased dramatically. This is especially true in the field of communication technologies. With the advent of the Internet and its increasing popularity among users, the use of pagers has greatly decreased. Motorola, a pioneer in the production and development of pagers, announced in 2001 that it would stop production and supply.

At first glance, this might seem like complete destruction of this nostalgic technology. However, within this relatively short period of downturn, the pager benefits for other countries became obvious. The pager is still considered by different countries as a cheap, efficient, and safe means of communication. Motorola stopped producing pagers, but they are still being produced. Spok is one of the companies offering a variety of one-way, two-way, and encrypted pager products. According to statistics, the number of subscribers to this product in 2003 (the period after the initial recession), reached more than 250 million people.

In spite of the development of smartphone technology and the expansion of covered networks, however, due to the existence of hidden and blind spots and weak building coatings, the pagers are still applied. In addition, pagers send a message to multiple people at the same time without any delay, and not having a delay is so important. Moreover, in disasters and natural disasters, mobile networks may fail or even be unable to provide their services normally and efficiently due to increased use. In this situation, the pager can be a key tool for communicating with others. It seems that until mobile networks are not sufficiently reliable or another alternative technology is emerging, the small belt hanging device is the best way of communication for those who prefer vital, fast, and secure communication!