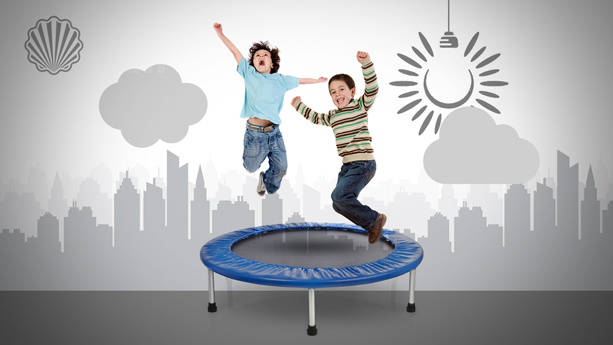 The trampoline is one of the constant components of current amusement parks and playgrounds, where children do not exchange the amusement of jumping with anything else. This attractive device, interestingly, is not limited to children and many adults are also very interested in it. In this article, we will take a closer look at this fascinating invention and review its history.

If you have children in your family, you are might be familiar with the trampoline as one of his favorite hobbies. Trampoline is a constant element of current amusement parks and playgrounds that children do not replace its joy with anything. Interestingly, this attractive device is not limited only to children and many adults are also very interested in it!

But the question is, how was the trampoline idea was shaped? Who is the inventor, and what changes have its original idea had to date?

Trampoline is said to have been born in Alaska, where the Eskimos used walrus skin to jump into the air. At the area's airport, postcards have been erected showing Eskimos jumping over walrus skin. Regardless of whether we ascribe the roots of this interesting and exciting Eskimos invention, many examples of similar jumping have been seen. For example, a group of people use a blanket and throw their friend in the air.

You must have seen firefighters' rescue operations closely or in the movies. They also use strong, resilient fabrics to save the lives of people trapped in the highlands (for example, fires in high-rise apartments). All of these examples show that the original roots of the trampoline have been used by many communities, both for recreation and for more serious purposes. However, the invention of the trampoline as a specialized sport and entertainment device dates back to the mid-1930s.

In 1930, sixteen-year-old George Nissen, a young gymnast who became an Olympic medalist in later years, attended a circus. With the acrobatic and daring movements of circus performers, who hung from thin rods and ropes and landed on a safe and soft net after continuous jumps, a new idea sparked in his mind: "What if these jumps continued and could reach a higher altitude?" jumped? "Wouldn't the performance of the acrobat make circus work more spectacular?"

These questions led Nisson to invent a jump board. In the garage of his father's house, which he used as a workshop, he fixed pieces of high-strength fabric to a steel frame. The elasticity of this device caused the person to jump on it and after gaining a little height from it, landed on it again, and then, this process was repeated again. Of course, young George made several unsuccessful attempts to achieve the desired performance, but he was not disappointed until 1936 when he was able to produce the prototype he was considering.

He originally named his invention the Bouncing Rig. But when he registered it in the patent system, he used the term "Tumbling device", the name that later remained on it, and this is how the trampoline was born. It should be noted that the trampoline is derived from the Spanish word "el trampolín", meaning to immerse (referring to jumping boards in water).

Nissan had high hopes for the commercial success of its trampoline device, so in the first step, he filed a patent in USPTO on June 4, 1941, and received the patent certificate No. US 2370990 on March 6, 1945. Meanwhile, George Neeson, follow-up of his efforts to protect the trampoline due to its potential commercialization success, registered a trademark called "Trampoline".

The idea for the trampoline trademark originated from his travel to Mexico in 1937 where he discovered that the Spaniards used the word "el trampolín" for a swimming board. He then by adding the "e" character to the end of the Spanish word, shaped this trademark for such a popular and amusing invention.

Nissan's next step in commercializing his invention was to invite students to use it. In 1942, the Griswold-Nissen Trampoline & Tumbling Company was established to market the first commercial trampoline models. Larry Griswold, Nissan's gymnastics instructor at the University of Iowa, was his co-founder of the prototype trampoline, but he soon left the business with Nissen to pursue a career in gymnastics and gym design. 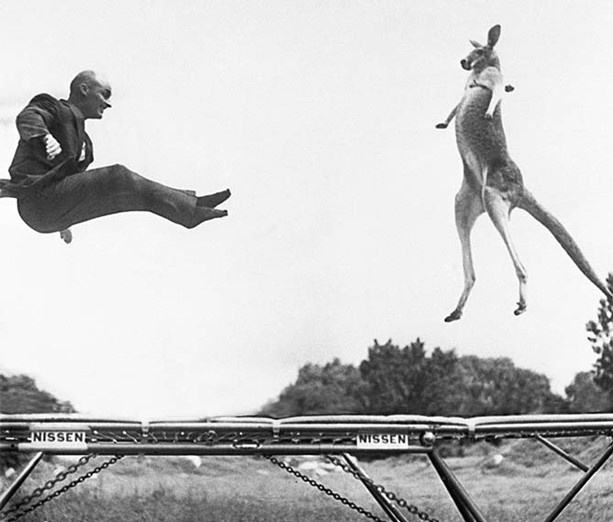 The use of trampolines increased over time so that during World War II, trampolines became an essential of circus shows, children's entertainment in schools, and even for the training purpose of pilots and military personnel. Nissen was still thinking about improving and evolving his innovative device, and while he had previously improved the performance of his device by innovating the use of springs to attach the fabric to metal frames, this time he turned to the straps used in the parachute, as replaced the trampoline floor cloth.

Later on, it was determined that the trampoline could have a variety of uses; American and Soviet astronauts, for example, used trampolines to improve their skills during the Cold War. With the growing popularity of the trampoline, the first world championship in the invention was held in London in 1964, and the trampoline was formally recognized as a sports device and even as a sport when at the 2000 Sydney Olympics, the trampoline entered the Olympic competition and was held in four disciplines, including Individual; Synchronized; Double mini; and Tumbling. The first Olympic gold medal on the trampoline was awarded to a Russian athlete!

It is true that today the trampoline has become quite a familiar device in the minds of children and adults, but keep it in mind that much of this has been due to the unstinting efforts of George Nissen. In 1960, he hired a kangaroo named Victoria from an animal farm to teach him how to play the trampoline. The result of a week of Nissen effort is a stunning photo of his and Victoria jumping on a trampoline, hovering in the air, eye to eye. This photo became so popular around the world and contributed to the popularity of the trampoline as a global phenomenon.

Nissen passed away in 2010 at the age of 96; He had enough time to see the presence of the trampoline in the Olympics, its widespread use by students and athletes, the training of pilots and astronauts, and many other uses before his death. In all these years, he never gave up trying to develop and improve his invention, so during 50 years, he registered 44 patents. Most of these patents were related to his innovative trampoline device as a combination of fitness, exercise, and acrobatic movements.