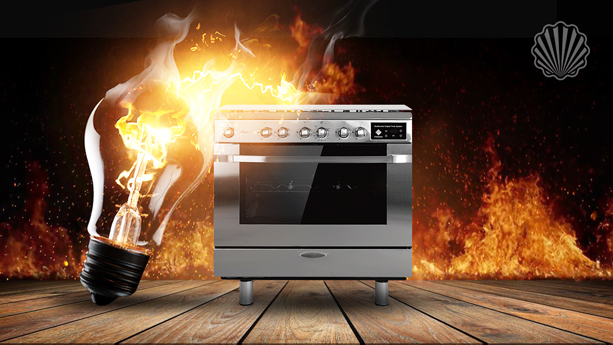 Eating food and eliminating hunger is known as one of the basic human needs; a need that has long been at the front of human priorities. Regardless of the Paleolithic and primitives, the main turning point in preparing food was the discovery of fire, which expanded the human food basket, from fruits, vegetables, and even raw meat, to a variety of cooked meats of birds, animals, and fish. As a result, this discovery has emerged numerous inventions and innovations in the field of cooking using fire heat; stove, oven, range Gas stove, electric oven, and even microwave ovens are the result of these innovations.

Throughout history, cooking was known as human art! Each region and culture has its own local food with a special flavor that varies the taste of other communities. Consider Italian pizza, Indian spicy food, and Japanese sushi, and of course hundreds of local Iranian dishes from Tabriz meatballs to Isfahan biriyani dish. Obviously, the most important tool for cooking these various dishes is the stove. Therefore, the stove can be considered the greatest invention of mankind in the field of cooking and cooking.

The ancients began cooking on an open fire (a pile of open firewood). The unexpected innovation of that time was to use stones to contain the fire as well as to store food on it, which eventually became very simple ovens for baking bread and other foods in Greece. In the middle Ages, food was positioned in metal or stone pots that were put over the fire and could keep warm food after cooking. According to historical documents, the first cooking oven was built in 1490 in Alsace, France. This stove was made entirely of bricks and tiles and had a chimney to remove smoke and food vapors.

The next innovation to modify cooking stoves was to control the annoying smoke that was generated in the process of cooking food and burning wood. To do this, special compartments were made with small holes on top of them. The use of perforated iron plates made the cooking process a little easier, but there was still no device that could be compared to today's stoves.

In 1728, metal stoves (made of cast iron) were introduced to the market. These early ovens were called five-plate ovens or "Jamb" stoves. Around 1800, Count Rumford invented an iron stove called the Rumford Stove, which was designed for very large industrial kitchens. By using this stove, users could heat several pots at the same time and their contents could be cooked. More importantly, the heating level (temperature) of each flame could be adjusted individually, which greatly increased the flexibility of the appliance for cooking a variety of foods. However, this device could not be useful to the general public, because it was too large for home kitchens at that time. Therefore, part of the inventors' efforts was focused on downsizing the device and designing a gas stove for home use.

In 1834, Philo Stewart designed a compact, wood-burning cast-iron stove: the Oberlin Stove. It was a metal kitchen stove small enough for domestic use, much more efficient than cooking in a fireplace since it increased heating capacity. It was able to increased heating capacity and enabled record cooking times. It became a huge commercial success; it could be cast into decorative shapes and forms and could easily withstand temperature swings from hot to cold. 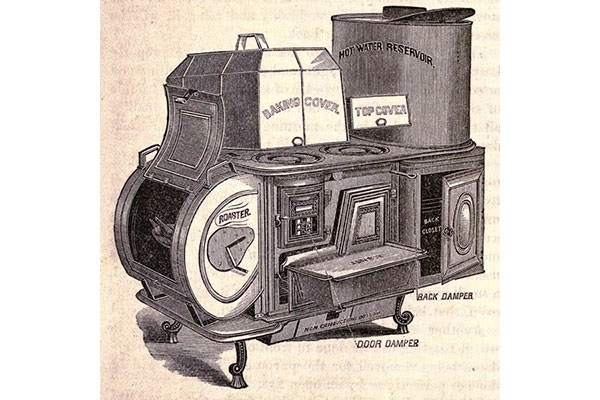 In addition to downsizing cooking ovens, another innovation focused on changing the oven's energy source. The inventors tried to find a more efficient way to create suitable and adjustable heat by replacing wood burning. The first idea came from Frans Wilhelm Lindqvist (1862 – 1931), a Swedish inventor. He designed the first sootless kerosene stove, operated by compressed air. He started a company, Primus, to manufacture and sell the Primus stove.

The use of coal was another idea pursued by Jordan Mott. However, a major turning point in this field occurred in 1826 by the English inventor James Sharp invented a gas oven in 1826, the first semi-successful gas oven to arrive on the market.

It should be noted that the first plan to use gas for cooking was proposed in 1802 by a man named Zacchaeus Winzler. But because of the failure to produce this design operationally and efficiently, James Sharp is known as the inventor and builder of the gas stove. With the development of the gas piping network and its widespread use in homes, gas stoves have also become a popular option for people, especially housewives. Easy temperature adjustment, no need to maintain wood and charcoal, as well as easier cleaning, made the gas stove a very successful commercial product.

It was not long after the development and commercialization of gas stoves that a new option was presented to users: "electric stoves". An early model of the electric stove was made in 1882 by Thomas Ahearn from Canada. He owned an electrical appliance company and knew the market well. So in 1892, to attract public attention, he organized a big show at the Ottawa’s Windsor Hotel, where he cooked a meal with his electric stove. Despite the advantages of Ahren's innovative electric stove, it's competing with gas stoves was not easy. Technology, and having electricity was not possible for everyone due to difficulties of electric distribution, and so competition between electric and gas stoves was delayed until the early 1930s. It is worth mentioning that one of the major advances in electric ovens was the invention of heat-resistant coils that could accelerate the commercialization of these innovative products.

In the last century, other innovations have taken place in the field of cooking equipment and appliances, the most important of which is the microwave oven. A microwave is a device that generates heat by electromagnetic radiation and the movement of water and other polarized molecules in food, causing the food to heat up or cook for a short period of time. Despite the development of microwave technology and its application in some areas, such as aircraft detection on radar screens, the application of this technology to cook food was discovered quite an by accident. In 1945, Percy LeBaron Spencer was experimenting with radar detection systems for warplanes and found that microwave radiation melted the candy in his pocket, giving birth to a microwave oven.