Inventions normally start with the idea to solve a problem.  Invention to innovate, may either be revolutionary (such as the airplane or lightening house with the light bulb), or a simpler invention which only has a small amount of improvement on the previous device.  In other words, every requirement as a problem, big or small, can attract the creative minds of inventors and innovators to create a new invention to solve and address. An interesting example of this is the small and large appliances that exist in today's kitchens!

Think about your kitchen for a second. There is a wide range of appliances, from microwaves, refrigerators, and stoves, which have occupied big spaces in your kitchen, to graters, Teflon dishes, and juicers that helps you to cook and prepare easily the delicious food you desire. It is true that in ancient times, or perhaps just a century ago, many of these appliances were not available, but it is very difficult and perhaps impossible to imagine their absence in today's kitchens life!

One of the most interesting and unique inventions among other kitchen appliances is the blender. This electric device, using small blades and a container embedded around it, crushes food and can even be used to prepare a variety of delicious drinks. The story of the invention and its commercialization reflects the efforts of various inventors and entrepreneurs, each with their own ideas, all made part of the development and evolution of this application device.

Based on shreds of evidence, the main inventor of the blender was a man named Stephen Poplawski, who was succeeded to design and produce a prototype of his innovative device in 1922. On February 18 of that year, without wasting time, he filed his invention in the patent system to protect the idea. As a result, on January 15, 1924, the U.S. Patent and Trademark Office (USPTO) issued his patent certificate, US 1480914. Interestingly, in the patent documents, Arnold Electric has been named as the patent owner. 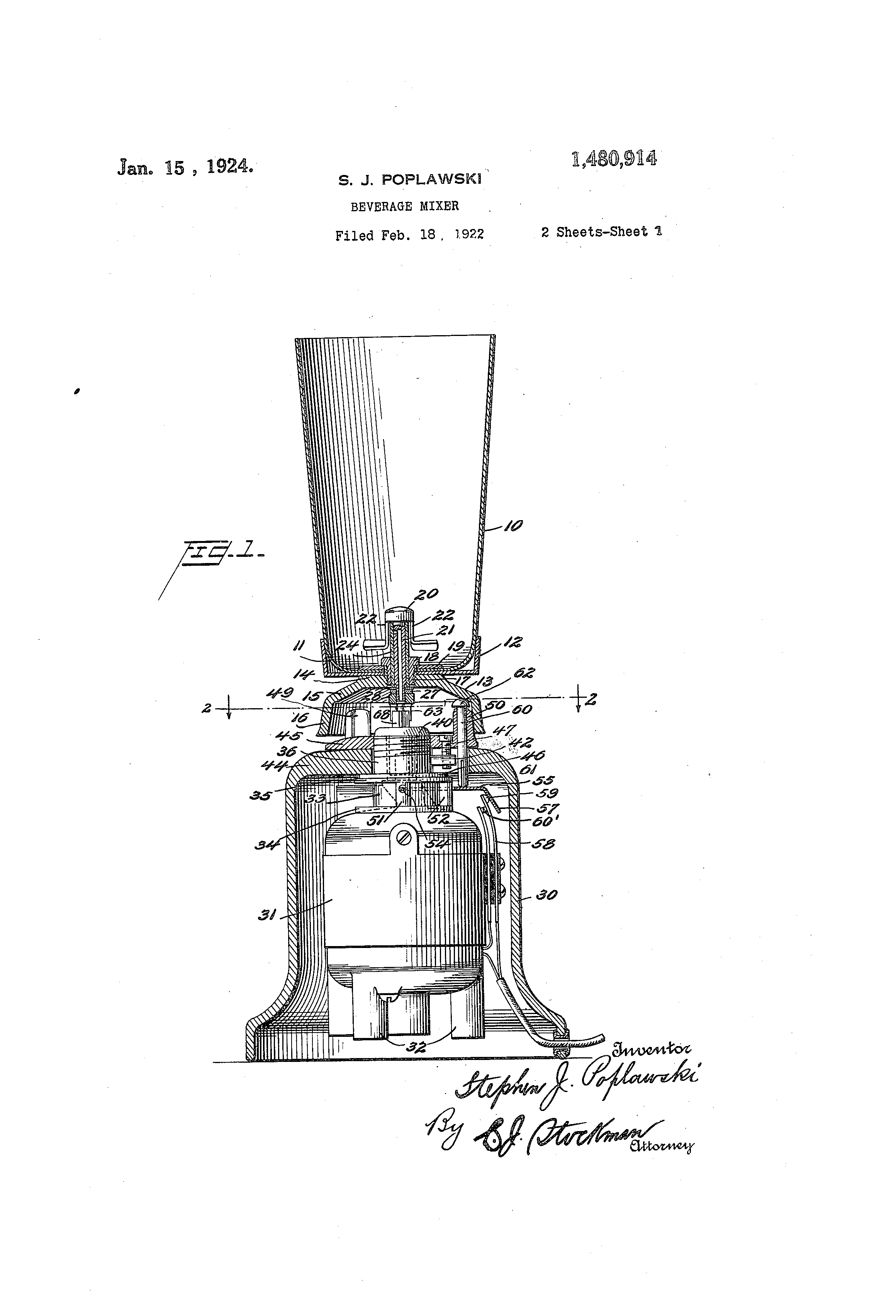 Stephan Poplavsky was the first one who employed a rotating blade at the bottom of the dish so that by rotating the blades, connected to a motor. The pieces of fruit could be crushed and a soft drink would be obtained as the final result. He originally wanted a way to mix up drinks like malts and milkshakes, which had become popular at soda fountain restaurants.  His design also included a rotary stirrer mounted on a pedestal with a blade drive motor. By installing the container on the base, the blades which were connected to a motor were rotated. In the final step of the process, the container was removed from the base and washed and cleaned after emptying its contents. In patent documents, the production of beverages is mentioned as the main function of the machine.

Although the original idea and design of the mixer were made by Stefan Poplavski, the improvement and, most importantly, the commercialization of the machine was done by the others people. To better understand this fact, we must go back to a decade ago, to 1910, where three friends named Chester Beach, LH Hamilton, and Fred Osius, founded a company called Hamilton Beach Manufacturing. The company was active in the field of design and production of kitchen appliances and became famous in this field. In the late 1920s, they focused on and produced Poplavsky's innovative design. But the original design needed to be improved. Therefore, Osius himself, who was interested in invention and innovation, began to work on methods of improving and evolving the mixer.

Osius' improvements in 1933 made the Poplaunsky mixer more efficient than before, but there was still little! Mass production and marketing of the device required proper financial resources, beyond what Osius had. Fortunately, Osius met Fred Waring, an architect and engineering student at Penn State, he was fascinated by the new tools and equipment; Osius, who was looking for financial resources and knew that Waring was interested in new inventions and innovations, heard about his appearance on a live radio program in New York and came up with the idea. The idea took Waring's eye, and he promised to support the plan. Six months later when about $ 25,000 more was spent on further research, the device still had minor technical defects. Waring tried to fix the flaws by forcing out Osius and redesigning the machine, and finally, in 1937, he installed the Miracle Mixer at the National Restaurant Show in Chicago for $ 75.29. Introduced to applicants.

One year later, Waring renamed its company as "Waring Corporation" and the blender was launched under the name of "Waring Blendor". With the change of "Blendor" to "Blender", the device was sold under the name "Waring blender" and the same name remained on it. Fred Waring started a one-on-one marketing campaign that initially started with hotels and restaurants he visited during the tour. Then he made efforts on luxury stores like Bloomingdale and B. Altman's, and he finally announced in a remarkable interview: "This blender will revolutionize American beverages." Time has shown that Waring was right!

In a short time later on, the Waring mixer became an important tool in hospitals (for implementing special diets) as well as a valuable research device in laboratories and research centers. It has been said that Dr. Jonas Salk to have used the same mixer to produce the polio vaccine. As the device became more popular and demand increased, sales of the Waring Mixer rose sharply to a record one million units in 1954. In recent decades, other players have entered the mixer manufacturing and sales industry, but the Waring mixer, now part of Conair, is still one of the most popular options on the market.

Fred Waring was the source of the financial and marketing needed to commercialize the innovative device invented by Poplaunski and Osius; Although the original idea and design of the device was done by these two inventors, but the person who was able to fix the remaining defects and bring the device to market, was Waring, and therefore, everyone called the mixer "Waring Mixer".