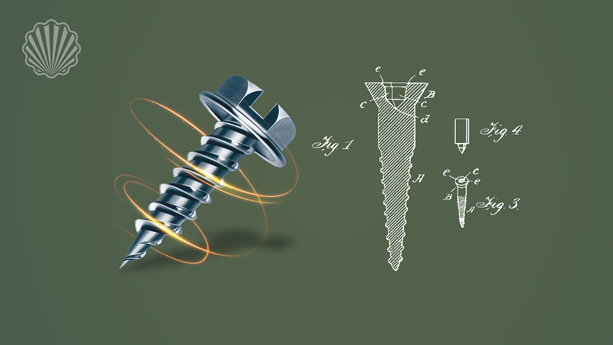 What is your idea about the most impactful inventions in our daily life? Which of the real-world human inventions has the strongest impact on our lives?

If you are a technical person and interested in repair and mechanical work, you probably have a lot of screwdrivers in your toolbox to turning all kinds of screws. Have you ever wondered how the screw was invented? Has the shape of the screw, as a component of a strong mechanical connection, been the same since its beginning? Who are the powerful inventors in the development of screwdrivers?

In general, any circular cylindrical member with a continuous helical rib is used either as a fastener or as a force and motion modifier. is called a screw. Screws are often used to fasten two objects to each other. The object h can be wood, metal, or any other solid surface. To make it easier to turn the screw, the upper edge of the screw is flat and has special grooves (in the form of a straight line or two intersecting lines) that allow the screwdriver to be placed without successive slips. At first glance, such features seem so obvious.

Historical studies indicate that the screw has become a common tool since centuries ago. While historians do not know who invented the first screw, the original screws are said to have been made of wood and were used for applications such as processing olive oil or pressing clothes. Later on, in the early years of the 15th century, metal bolts were used to connect two objects.

If we look at the development of screws respecting to its design and production machines, the first major innovation in this industry was the manufacture of Screw-Cutting Lathe, which was made in 1770 by Jesse Ramsden. This innovative idea inspired other inventors and makers of mechanical equipment, and in 1797, Henry Maudslay designed a lathe to mass-produce a variety of very precision-sized screws. Exactly one year later, an American inventor named David Wilkinson built the machines needed to mass-produce threaded metal screws in the United States.

Despite the development of various methods and equipment necessary for the mass production of metal screws, but there was still a challenge faced by consumers. These screws were very difficult to tighten and often resulted in skin-deep injuries to the user's hands and fingers. The main reason was the problem of fastening the screwdriver head and the screw. This and imbalance of the screwdriver led to its slipping and as a result, further injuries. This was a problem that Peter Lymburner Robertson, the great Canadian inventor, had been faced. A small accident while twisting a screwdriver and injuring Robertson's hand caused him to investigate deeply into finding a solution. The result was extraordinary: a safe and improved screw called "The Robertson® Drive".

Robertson's main idea, to make it easier to use the screwdriver, was to insert a square-shaped socket in the head of the screw and a square protrusion on the tool. Both the tool and the socket have a slight tape. This could allow the screwdriver to fit closely and tighten the screw by hand without worrying about constant slipping. This interesting and creative design attracted the attention of many builders and manufacturers and practically became a standard in North America. Launched in the early twentieth century, the famous Ford Model T is said to be one of the first customers of Robertson's innovative screws, with more than 700 screws used.

It should be noted that the success of Robertson's new screw was not achieved simply. Always looking for new ways to improve and facilitate work through various innovations, he expected the idea of ​​a square-shaped socket screw to be immediately welcomed by customers. Therefore, the first step he took to protect his invention was to file it in the patent system of Canada and then the United States.

The result was the U.S. Patent and Trademark Office issuing a patent number "US 975285" in November 1910, three years after his inventions had been filed, resulted in protecting invention from infringement by others in a large and attractive market. More interestingly, the idea of ​​creating a screw hole to simplify the process of turning screws had already been considered by inventors. One of the best examples of this is the patent number "US 161390" belonging to a person named "A. Cummings” which was filed in 1875 (more than three decades before Robertson's invention). Of course, the project could not achieve much commercial success, the main reason being the difficulty of making these packages.

After obtaining a Canadian patent in 1909 and failing to attract the attention of the Steel Company of Canada, the first obstacles arose for Robertson. Some even tried to weaken and revoke his patent, but they did not succeed. Not having enough capital to mass-produce the twists, as well as local competitors trying to drive out the newcomer, double up Robertson's problems.

However, in 1912, at the height of his frustration, two interesting things happened to Robertson. On the one hand, he got many enqueries from manufacturing companies with the aim of reducing production time and using safe screws in products, and on the other hand, his patent portfolio and his international patent, give him the opportunity to enter the national and international market.

He went to England and introduced his screw to the artisans of this country. The launch of two plants in Canada and the United Kingdom was the result of these efforts. Granting more than 40 licenses to various manufacturers, including steel mills, automakers, etc., was another achievement of Robertson, who eventually made him a giant in the screw industry and his square screw design became an international standard.

Since then, all kinds of screws have been made and marketed in various sizes, but the main idea of ​​patterning the edge of the screw is known by Peter Robertson. He inspired many later screwdriver makers and inventors and immortalized his name in the history of the industry.