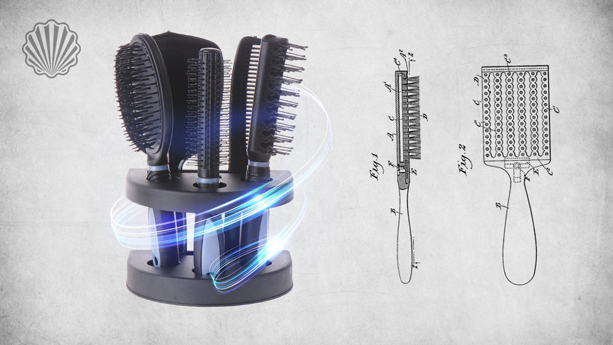 One of the most important basic human needs is health care. Bathing and keeping the body clean is the primary symbol of personal health care that billions of people throughout history have taken care of this important every day. Obviously, in response to this urgent need, a set of innovative tools and products have been developed by inventors, perhaps the most popular of which are soaps, toothbrushes, and shampoos as personal hygiene items. However, as we all know, personal hygiene can also include other aspects, such as beauty and attractiveness.

Imagine being able to attend a very important business meeting or attend a family party with your friends and acquaintances. After thinking a while and choosing the right clothes, you will probably brush and style your hair before leaving home. Experience has shown that tidy and stylized hair plays a key role in attracting people!

Combs and hairbrushes are part of the same personal hygiene tools that are extra important in combination with the issue of personal beauty and tidying. Studies show that the use of combs to style hair is thousands of years old in human history. Excavations related to the Paleolithic period indicate that humans have used tools such as bones, wood, and bark of trees to decorate their hair and prevent pests such as lice. The oldest known comb is said to be made of animal bone and dates back to 8000 BC.

As the comb developed, however, it became a decorative hair ornament used to display wealth and power in countries like China and Egypt. It was from this display of wealth that the comb’s cousin—the hairbrush—was born. This evolution and of course the dramatic application of this valuable invention led to the birth of hair follicles as a replacement for old combs.  Ancient paintings and sculptures depict people with curly hair or with regular twists, proving that a type of hairbrush was used to weave and style their hair.

As society grew and developed, the need for hairbrushes was not limited only to health issues and in practice, appearance became a priority. However, hairbrushes were still limited to the wealthy class as a decorative item.

To better understand this space, consider a few centuries ago that handmade and expensive hairbrushes were used only for just marrieds bridal hairstyles and even a very popular gift for many married women (in the form of a set containing hairbrushes, combs, and a mirror).

However this trend did not continue, and as the demand for hairbrushes increased, some people began to think about professional production and marketing of combs and brushes. One of the first manufacturers of hairbrushes was William Kent, who founded the Kent Brushes Company in Great Britain in 1777. At that time, the whole process of making a hairbrush was done by hand, so that twelve people participated in the process of making a brush. The company still continues to produce a variety of hairbrushes as one of the oldest British companies.

The second major breakthrough in the hair brushing process was the invention of the automatic machine for manufacturing brushes in 1885 by the Englishman Mason Pearson. This device, by accelerating the production process of hairbrushes, converted this device from a lucrative device to an everyday tool.

It should be emphasized that most of the innovations related to combs and hairbrushes date back to the nineteenth century. Along with the development and mechanization of the manufacturing and automation process carried out by the British, a series of inventions in the field of various new types of hairbrushes were introduced by American inventors and innovators.

The first patent filed in the United States for a hairbrush was a design patent, US D645, filed in 1854 by Hugh Rock. In this patent, he focuses on combing combs and hairbrushes and describes designs of his creative ideas. A few years later, a man named Samuel Fiery came up with the idea of ​​using elastic cords in combination with natural hair for a hairbrush. He filed his invention in 1870, which resulted in the grant of a patent number "US 106680" by the US Patent and Trademark Office (USPTO).

But the most important turning point in the history of the development and evolution of the hairbrush is the invention of Lyda D. Newman, an African American hairdresser, which was registered in a patent entitled "Improved Brush". The patent, US 614335, approved by the USPTO in November 1898, aimed to describe a simple yet durable hairbrush. Newman's most important innovation was the ability to remove the brush handle and ease of cleaning. This invention includes durable synthetic bristles as well as a ventilation chamber that enables easier cleaning, along with a storage place for any debris pulled from the scalp or hair.

More than a century has passed since then. A variety of hair brushes are found in homes, and these tools are no longer limited to the wealthy and the aristocracy. While there are still samples with wooden handles on the market, most brushes are made of light and inexpensive plastic, which allows the manufacturers of this product to produce brushes in various shapes and sizes. It is worth mentioning that in recent years, hairbrushes suitable for hair structure (straight, wavy, or curly) have been introduced to the market and even professional brushes for professional hairdressers are produced.

Apart from this confusing variety, the most important change that has taken place is the generalization of the use of hairbrushes, is the conversion of such luxury device accessible by upper-class families to an everyday tool in ordinary life and public hygiene and cosmetic device. From this perspective, the commercialization of this ancient invention can be considered a very long process and the result of the efforts of a wide range of inventors.