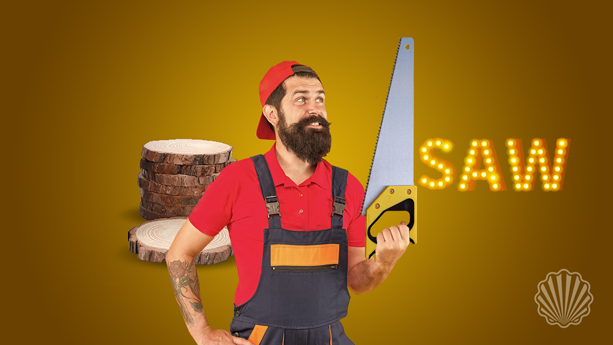 The saw is one of the oldest human-made inventions, which is still being developed! A practical and very simple tool consisting of a hard blade, wire, or chain with a hard toothed edge. It is used to cut through the material; often reminds people of cutting wood and lumber. The cut is made by placing the toothed edge against the material and moving it forcefully forth and less forcefully back or continuously forward.

Saw has existed since ancient times and, of course, over time, relying on the power of human creativity, they have upgraded with so many advances. This route has led to today's advanced electric and gasoline saws, which have made the process of cutting wood and other metal surfaces easier than before.

Historically, metal hand saws has been discovered from around 1500 B.C from Ancient Egypt in ancient Mesopotamia, It should be noted that if we consider the basic tools made of stone and bone as a kind of saw, then the invention of this invention can be attributed to more than 14,000 years BC.

With the discovery and introduction of iron, man-made tools became somewhat different. For example, saws and other cutting tools were made of metal instead of stone. This can be considered as the first turning point in the process of development and evolution of jigsaws.

Over the centuries, the shape and design of the saws went through significant changes, and little by little the work reached the point in which, there was the ability to change the blade and mass-production of saws. From this point of view, hand saws cannot be considered an invention that was invented within a specific time and with a single inventor. In other words, the construction and development of the saw as a very important tool (at least in previous centuries), has been done with the cooperation of a wide range of inventors and creative people in various technical fields, and the result has been the saws available today.

Along with the gradual development of jigsaws, there are other important and key innovations in this industry, the most important of which is the use of driving force other than the strength of human muscles. Almost a century ago hand power only was used to cut wood and timber, today there are a variety of chainsaws and gasoline saws on the market that can be used easily, quickly, and with the least hassle. Considering the heavy equipment for cutting metals and stones, it can be said that this important historical invention, during its relatively long life, has undergone significant changes.

One of the interesting innovations in this field is the design and construction of Chain Saw. This saw, also known as a motor saw, is one of the most important garden tools. A chainsaw consists of a motor and a type of fine-toothed chain around a sheet of metal that is cut by rotating the chain. Interestingly, the original idea for the chainsaw was introduced in the late 18th century for use in pelvic surgery by two Scottish physicians, John Aitken and James Jeffrey,

Years later, an American inventor named Reginald L Muir used the idea of ​​a chainsaw to cut wood, and for this reason, his name has been included in historical sources as one of the inventors of chainsaws. In 1905, Muir filed patent applications in the United States and Canada for patents, US865118A and CA96752A. He went on to develop his invention and applied for new patents. However, Muir's innovative machine was very heavy and required a crane to move. This limitation made his invention not a significant commercial success and not a practical device.

In 1928, a German mechanical engineer named Andreas Stihl applied for a patent application in Switzerland under the name Electric Chainsaw, which was granted a grant in June 1929 under the number "CH133857A". He then submitted several applications to complete his previous application and develop the idea of ​​a chainsaw, including Guide rail for chainsaws (DE728639C), the Switching device for electrically driven chain saws (CH163953A), and the release of the chains on the saw. Easily releasable chain luck (DE651064C), equipment for supporting chainsaws in cutting trees (DE690453C), and saw sharpening machine (US2217145A). Due to the fact that Andreas's invention was the first practical device for chainsaws, he is mentioned in most texts as the main inventor of these saws.

Another innovation in the design and construction of saws is the circular saw (Circular Saw), which performs the cutting process using a metal disc. The inventor of this unique device is the Englishman Samuel Miller, who in 1777, registered his invention in the British patent system and received a patent number "1152". It is said that the use of circular blades was somewhat common at the time, and what made Miller different was the saw machine itself, which used this circular blade to cut wood.

Almost three decades later, in 1813, an American woman named Tabitha Babbitt invented the first circular saw used in a sawmill. He was working in a factory in Massachusetts, and when he saw two men trying to cut wood, he decided to improve and develop the two-person saw so that would spend less time and effort on the cutting process. The saws in that time cut in only one direction, which made the wood-cutting process dreary and tedious. Babbitt used a slotted metal disc as a saw blade, and this simple invention greatly reduced the labor of the workers. Babbitt's idea was later used to create a very large machine in a lumber mill, and the circular saw quickly became a favorite tool of many woodworkers. At first glance, Babbitt's idea may have been very similar to Miller's, but differences in device dimensions and some design details made Babbitt's invention different from previous examples and highly acclaimed.