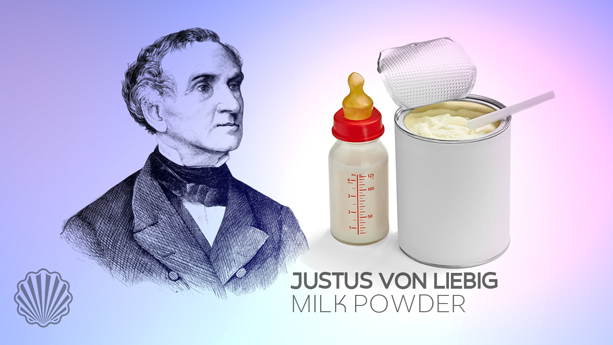 Discovering a healthy, nutritious, and acceptable alternative to breast milk has been one of the great human challenges that have engaged notions of many creative and thoughtful inventors and parents for centuries. The result of the efforts and initiatives that have been made in this direction is today's powdered milk, which simply provides the necessary substances for the baby's growth. But on the way to what is easily accessible today, there are many interesting and readable ups and downs.

Studies show that earlier than the emergence of a new lifestyle and greater participation of women in society, natural breastfeeding was considered as an undeniable principle and preferred method. In other words, this option was removed only when, for various reasons, breast milk was not sufficient to feed the baby. In this case, methods such as using animal milk or breastfeeding by others were followed.

In the 18th century, in Europe and the United States, hiring a person to breastfeed a newborn baby became common, and such a person was called a "Wet Nurse". The wet nurse either lived in the employer's house or the baby was delivered to her to be cared for and fed for a certain period of time. At that time, it was believed that the quality of milk that the baby received would affect his future, and therefore, this group of nurses was carefully selected. For example, brown or black nurses were preferred to blond nurses because their milk was thought to be more nutritious!

It is interesting to note that in the eighteenth century, the demand for nursing nurses, especially in Europe, was so high that offices were set up to provide related services. By law, nurses underwent routine medical examinations and were prohibited from feeding more than one infant at a time.

Eventually, this form of breastfeeding gradually declined, and attention shifted to finding a suitable alternative to breast milk. The option of "Dry Nursing" has been around since the 19th century, and for this purpose, the milk of animals such as goats, cows, and even donkeys was used to feed babies. During this period, cow's milk was more widely used due to its high availability, although donkey's milk was thought to have more material goods. This impression seems to be due to the similarity of the appearance of donkey milk to human milk! In addition, specialists discussed the best way to prepare milk. Some people believed that fresh animal milk was better, while others recommended boiled milk or a combination of diluted milk with water and sugar (or honey).

The first signs of a major problem appeared in the early nineteenth century. The death rate of infants who were fed cow's milk without any processing was very high. Compared to breastfed infants, they experienced severe colic and dehydration.

In 1838, a German researcher named Johann Franz Simon published the first chemical analysis of human and cow milk. This valuable research became the basis for nutrition science and the production of new food formulas in the following decades. Simon discovered that cow's milk protein was slightly higher than human milk and, on the contrary, had fewer carbohydrates. Experimentally, clinicians recommended that water, sugar, and cream be added to cow's milk to lessen colic to bring it closer to breast milk.

This trend continued until, in 1860, a German chemist named Justus von Liebig developed the first commercial baby food. His innovative product, a powdered formula of wheat flour, cow's milk, malt flour and potassium bicarbonate, became very popular, especially in Europe. The powder, which had to be mixed and used with warm step milk, was a major turning point in the production of a breast milk substitute and quickly spread to other markets, including the United States. In 1869, the first commercial baby food in the United States, Soluble Infant Food, was offered in one-dollar bottles.

The extremely large and attractive market for baby food products, along with the commercial success of Van Liebig's invention, prompted other companies to enter the field and start their own research investments. Interestingly, by 1883, there were over 27 patented products on the market. Most of them were lacked nutritional value, including essential proteins, vitamins, and minerals, and were considered obese.

Van Liebig's first serious competitor was Nestlé’s Infant Food, which was developed and marketed in the 1870s. This product, which was based on malt, cow's milk, sugar and wheat flour, had a big difference from the previous product, in that it did not need heated cow's milk during the final preparation. In other words, it was enough to mix the prepared powder with water and use it. From this point of view, Nestlé baby food can be considered as the first complete and artificial formula for feeding babies. This product was offered in the US market in $ 50 for each bottles.

Over the next two decades, several new cow's milk modifying formulas were introduced; but in the nineteenth century, despite the diversity, these products rather were little sold (compared to its high demand and very large markets). Moreover, these products are more expensive than cow's milk, and on the other hand, it was generally believed that due to the lack of formulas used in terms of nutritional value, medical supervision is also required.

Meanwhile, many medical theories were proposed. For example, Thomas Morgan Rotch, a physician at Harvard University, developed a method called the "percentage method," which was heavily promoted by physicians from 1890 to 1915. In this method, cow's milk was diluted to reduce its casein, and instead, cream and sugar were added to compensate for the reduced sugar and fat content. The production of this compound, which was done in laboratories or at home, was time-consuming and very complicated, and therefore, in the 1920s, this method became obsolete.

Simultaneously with Van Liebig's invention and around the same time, another valuable invention was made by Gail Borden. Along with the pasteurization process used in the dairy industry in the late nineteenth century, perhaps the greatest advancement in the dairy industry was the production of evaporated milk. Gil Borden found a process of heating milk at a high temperature in a closed kettle that removed almost half of the milk water, and by adding sugar as a preservative, a sweetened condensed milk was obtained.

This product had high durability and was easily tolerated without fear of spoilage. This condensed milk was first used by soldiers as a valuable food portion and was later introduced to the market as baby food. However, due to the high sugar content of this product, many specialists did not recommend its regular use as powdered milk for babies. In 1856, Gil Borden filed a patent with the U.S. Patent and Trademark Office, which eventually earned him a patent certificate, US 15553.

In any case, from the middle of the twentieth century, the commercial formulas of powdered milk were gradually adopted by families, and cow's milk as a substitute for breast milk was practically abandoned. Today, various brands are active in the milk powder market, and due to the high competition of actors, new innovations are made in this field every day.