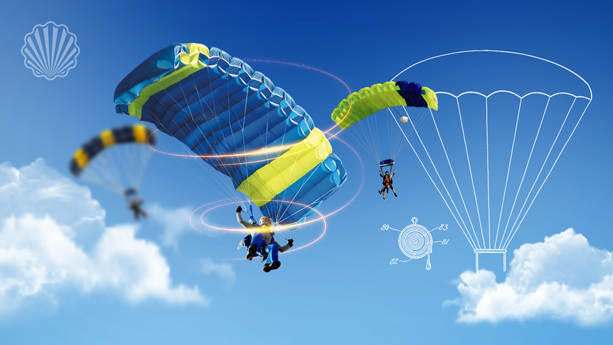 The parachute is of the most important equipment in the aviation industry, a device the lives of the occupants of the military are heavily dependent on which. This unique invention was first conceived by Floyd Smith, an American pilot, and almost revolutionized the aviation industry. It is interesting to note that until the end of World War I, there was still no parachute available to be used.

On a stormy day in April 1914, Floyd Smith's wife, Hilder, jumped out of a two-seater plane 650 feet above the Pacific Ocean off the coast of Los Angeles. The parachute she was carrying, wrapped around her arms and legs, and she expected to die as she moved rapidly toward the ocean. She was not a good swimmer, which is another concern. Finally, at a height of 250 feet above sea level, the parachute suddenly opened. "It opened so late that I had to lift my legs to avoid hitting a naval rig," Hilder said later about this experience. This horrific experience prompted Floyd Smith to pursue the idea of ​​opening the parachute manually at a safe distance from the aircraft.

James Floyd Smith was born in 1884 in the state of Illinois. He moved to California at a young age. Floyd was a cowboy, machinist, orange grower, sugar factory worker, and flying circus trapeze artist with the Flying Sylvesters. Because of his passion for flying and daring work, he began working as a member of the Flying Sylvesters Circus. Hilder, who was interested in this work, joined the group after marrying Floyd.

After spending five years at the circus, the Smith family decided to pursue a new hobby. They had saved some money and in 1912 they spent it on aviation studies and the construction of private jets. This was exactly nine years after the Wright brothers' first successful flight. "In those days, if you wanted to fly, you had to buy an airplane or build it yourself," Hilder recalls. Floyd started flying fast. Influenced by their previous experience in the circus, the daring couple began to fly all over the country, and the crowd followed their movements with great excitement.

A few years later, Floyd and Hilder returned to California, and Floyd worked as a test pilot for Glenn L. Martin, the renowned aircraft designer, and manufacturer. In 1915, he set new altitude records for his flights over San Diego, and even two years later, he built the first simulated aircraft carrier at the new Naval Base at Coronado Naval Base. During this time, Floyd and Hilder did not forget following their dreams which were flying with parachuting. In fact, the day Hilder survived that dangerous jump off the coast of Los Angeles, Glenn Martin himself was piloting the plane!

While Floyd worked in San Diego, the war in Europe continued. For the first time, aircraft were used for exploration and immediately later for bombing enemy locations. At the same time, the number of military pilots increased rapidly. It is interesting to note that some pilots became famous for their risky air adventures, including German pilot Manfred Albrecht von Richthofen, nicknamed the "Red Baron" of Germany. Despite a series of pilot operations, a small number of them had parachutes. Some military seniors believed that the parachute was too bulky and could negatively affect the performance of the aircraft. Some others were concerned that the existence of such a device would disrupt the pilots' fighting spirit and encourage them to abandon aircraft. In other words, the lack of a parachute was believed to encourage pilots to return to struggle and repair the damaged aircraft.

However, the increase in pilot losses has led to inventors from all over the world designing and developing new types of parachutes. With the end of the war and the high death toll of pilots, the army of many countries acknowledged the need to keep pilots safe, and almost everything was ready for a new revolutionary innovation!

After Hilder's deadly jump, which turned the issue of parachute safety into a personal issue for Floyd Smith, he thought of ways to improve and make the parachute more efficient. Obviously, the increase in the US military's use of military aircraft led Smith to have a unique opportunity to come up with new ideas for inventions, and commercialization.

The usual parachute at the time (similar to what Hilder used) followed a static system. The package containing the parachute was tied to the plane through a rope, and when the person jumped out of the plane, the parachute was released and suspended in the air. As Hilder involuntarily pointed out, if the jump is not done correctly, the mechanism may not work and therefore the parachute may not work properly. On the other hand, the parachute could be opened and twisted near the plane. On the other hand, due to emergencies, such as the pilot escaping from a damaged or out-of-control plane, the probability of such a system failure was very high.

In late July 1918, Floyd Smith's newly formed Floyd Smith Aerial Equipment Company filed a petition for a new type of parachute with the U.S. Patent and Trademark Office which was granted on May 18, 1920, under the number "US 1340423". The patent, called the "Floyd Smith Air Pack", is the first parachute equipped with a manual guarantor. 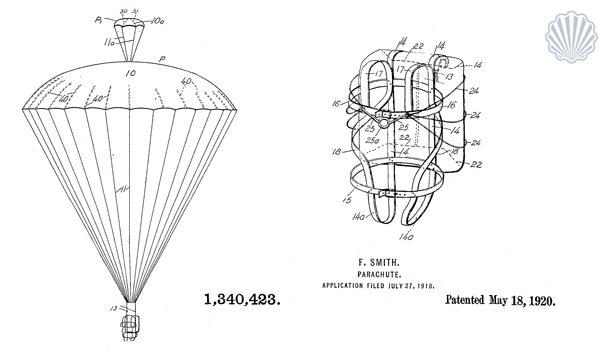 Smith's invention captured the attention of Major E. Hoffman, director of the US Army Research Group for the Study and Development of the Parachute. The group was formed in December 1918 with several civilians and Hoffmann's aides. It initially tested 17 different types of parachutes around the world. Eventually, an improved version of Smith's invention was developed, and after repeated experiments by doles instead of humans, preparation for human experiments were put on the agenda. Some team members believed that the person jumping out of the plane deviated during a free fall or may even lose consciousness. So he may not be able to pull the toggle and the parachute will not open. It seemed that the only possible solution was a real parachute test by a volunteer!

One of Smith's colleagues, Leslie Irvin, who had previously experienced parachuting, volunteered for this dangerous experiment. On April 28, 1919, while the crowd watched the sky with fear and excitement, Irwin flew into the sky on a De Havilland DH9 double-decker and pilot Floyd Smith. He carried two parachutes (one on his back, which was to be opened first, and the other on his chest). At an altitude of 1,500 feet, Irwin stepped out of the cockpit and jumped out after smirking and shaking hands with his friend. The Parachute release rope was pulled and the full parachute was opened at an altitude of about 1,000 feet. On the same day, Smith prepared a new application for his parachute, which eventually resulted in his patent number "US 1462456".

Interestingly, there was intense competition for the commercial production of the parachute between Floyd Smith and Leslie Irwin. Less than two months after the successful landing, Irwin founded the Irving Air Chute Company in New York. Following this action, the US Department of Defense commissioned the company to produce 300 parachutes, as it had offered the lowest bid price compared to competitors.

In response, Floyd Smith Aircraft Company sued the company for infringement, but the judge awarded very little compensation despite Smith's patent validity and emphasis on a proven infringement. The main reason for this ruling was the government contract with Irwin, and this factor caused Smith to address the US government directly this time to compensate the financial damages. However, before the lawsuit was settled out of court, the US government paid $ 3,500 for Smith's exclusive rights. With financial compensation, Smith transferred his patent to Irwin, which for many years continued to be the main supplier of parachutes to the US military.

Smith, on the other hand, continued to develop creative ideas to improve parachute function. In the mid-1920s, he succeeded in designing a new parachute that was easier to work and less expensive. This invention was also registered in the US patent system and issued as the patent number "US 1755414" in April 1930. Smith also filed for a parachute seat in 1929. The invention, which allowed a person to be released from the fuselage in an emergency, provided patent "US 1779338" for this prolific inventor.

In 1938, when Europe was once again heading for a new war, Smith helped found the Pioneer Parachute Company and served as its vice president and chief engineer. He continued to innovate and designed new parachutes for pilots. Examples of these interesting innovations can be found in patents US 2262119, US 2316895, and US 2316896. Pioneer was one of the first parachute manufacturers to use nylon instead of silk, which is a unique innovation due to the difficulties associated with its supply during World War II. By 1942, the company was the largest manufacturer of nylon parachutes in the world, and at the height of the war, nearly 3,000 employees were working on working shifts to produce ordered parachutes.

Floyd's son, Prevost Smith, later joined Pioneer. This father-son partnership led to the founding of the Smith Parachute Company in 1947. With Floyd's death in 1956, the company was renamed the Prevost F. Smith Parachute Company. Priest, like his father, was a creative and thoughtful inventor. His numerous technical achievements in the design and construction of parachutes for the use of astronauts and the use of military weapons during landings led to a series of technological collaborations with NASA, the Navy, the Air Force, and several major defense contractors.

Since then, the parachuting world has continued to evolve, but Floyd Smith remains one of the industry's pioneers. He changed the world of aviation, with the military relying on innovative parachutes and contracts with Smith and Irvine, as well as other customers such as the US Air Service and civilian companies in the industry.