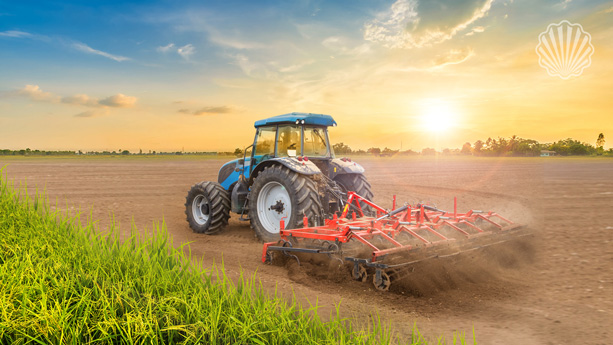 When we think about the agricultural sector, tools and equipment, such as combined harvesters, tractors, and even simple tools such as shovels, pruning shears, or sprayers come to our mind. An investigation of the evolution of most of these devices shows that for centuries, no particular innovations had emerged in these areas, and it can even be said that the tools used under George Washington (the first president of the United States) were better and more advanced than the tools used at the era of Julius Caesar (the founder of the ancient Roman Empire)!

Perhaps one of the best examples of this is a plow. This simple yet highly practical tool in the agricultural industry is equipped with heavy steel blades that are used to dig, overturn and plow the land.

The plow is tied to animals such as cows and by moving them, a sharp steelhead is sunk into the ground and the work is done to turn the soil over. Studies show that this valuable human invention has existed for centuries, and even the earliest plows in ancient Rome were slightly better than similar samples in the United States eighteen centuries. Certainly, all this is related to the emergence and introduction of modern plows, and in fact, the last years of the 1790s can be considered as the beginning of continuous improvement and innovation in this field!

Early plows consisted of a stick and a small iron joint at the end that simply pull out the ground. This tool, which was used in some US states until the end of 1812, had many problems. In addition to the relatively low strength and limitations in using the weight factor to properly dig the ground, it was also difficult to create deep grooves in the ground. These challenges led to reforms to redesign and evolve these plows.

The first attempt was to use heavier wood and sharper iron joints that attached irregularly due to a lack of proper attention to integrated design. None of the metal fitting curves were similar, and since metalsmith made the tool on a case-by-case basis, there was virtually no original pattern for designing and manufacturing it. Another major problem was the extreme tension between the blades of the plow and the ground, which made it difficult for the animal to move. In addition to the fact that the cows or horses had to be strong enough, they often needed a few young and strong men to guide them.

All of this has led to the removal of restrictions and the design of an efficient plow more seriously than ever before. Studies show that several inventors from different countries have contributed to the development of the plow. Each of these individuals added something unique to this equipment that gradually improved the performance of the tool over time. One of the most famous of these inventors was Thomas Jefferson, a famous American politician, musician, philosopher, and inventor who, as the third president of the United States, introduced several inventions to the world. He devised a different design for the iron joints of the plow, which made it more efficient than before. However, Jefferson was busy with other staff than patents, and for that reason, he never applied for a patent.

From the point of view of a modern and the operational plow, perhaps the first inventor was Charles Newbold. He received the "US X177" certificate In June 1797, from the US Patent and Trademark Office for a type of cast iron plow, which, of course, was not welcomed by American farmers. They believed that the plow might poison the soil and cause more weeds to grow.

A decade later, in 1807, David Peacock was able to obtain another patent for a metal plow and to further strengthen his patent, he purchased two of his patents from his owners. Newbold, however, sued Peacock for patent infringement and was awarded $ 1,500 in damages. This case can be considered the first legal lawsuit in the history of the invention of the plow!

The next influential inventor was a New York blacksmith named Jethro Wood, who designed and produced a three-component cast-iron plow. This plow was designed in such a way that when a part breaks down, that part can be removed and there is practically no need to buy a new plow. To protect his invention, he patented two patents in 1814 and 1819. The patent certificate, numbered "US X3130", was assigned to the full version of his innovative plow.

The main innovation of this optimistic and creative blacksmith was the application of the principle of standardization in the design of the plow, which led to the significant development of this agricultural tool. At that time, farmers had somewhat forgotten their previous prejudices and were even interested in buying new plows. It is said that with the welcome of the farmers, the frequent infringement of Jetro Wood patents began so that he has spent all his wealth to pursue and prosecute these infringements.

In 1837, John Deere made the first steel plow and marketed it. The problem of many farmers at that time was the sticking of heavy and fresh grassland soils to the cast-iron plow, which was also solved with the invention of John Deere. This so-called self-scouring steel plow  was filled in the US Patent System in 1865, earning it the patent number "US 46454." In the same years, other minor developments took place, such as the use of several plows stuck together instead of a single plow. This innovative idea could cover more space using the same manpower or animal as before, and as a result, complete the plowing process in less time. 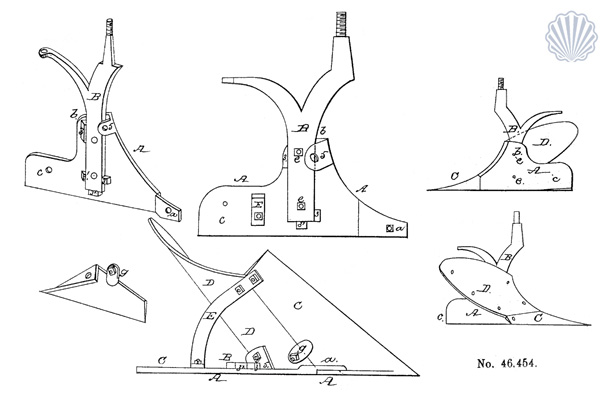 Finally, one of the most significant innovations was the replacement of animals with motor power, which began in 1868 with the introduction of the first generation of steam engine tractors. In 1878, the internal combustion engine appeared, and finally, in 1892, John Froelich was able to produce the first operating tractor with a gasoline engine. Hart-Parr Gasoline Engine Company first used the term "tractor" in 1903, and since then, this equipment has become one of the most important agricultural tools. It was in this direction that from 1916 to 1922, more than one hundred companies entered the manufacture and supply of tractors!