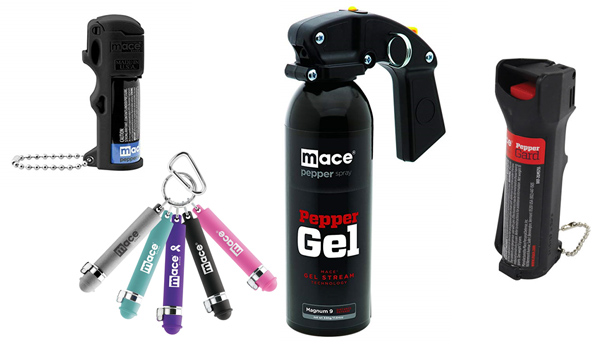 All kinds of pepper spray and other tear gas are available to riot police, private security guards, women and people concerned about street harassment, and even some criminals and gangs. In May 1968, in Chicago and in front of reporters and television cameras, a strange event happened. A former US Navy officer, Joseph Woods, sprayed a spray on his face and began to weep. This non-lethal but effective gun was called tear spray or its trade name "Mace", which caused a severe burning sensation in the eye.

At that time, only four years had passed since Mace's invention, and this strange device had not yet been publicly marketed. Interestingly, short after its invention, its use as a personal protection tool and a riot control weapon was on the agenda. The creation of this cruel, but useful and vital invention in critical situations was accompanied by a fascinating story that has become a symbol of self-defense tools.

Half a century ago, Alan Lee Litman and his wife Doris Litman lived in Pittsburgh, Pennsylvania, USA. Doris was a teacher and Alan was a talented 29-year-old inventor who had registered three patent applications for infant milk infrared heater (1961), egg cooker (1963), and bacon cooker (1963) with the US Patent and Trademark Office. While these inventions had not reached the commercialization stage, with no benefit for Alan, Litman's research focus was affected by an unexpected event that drastically changed the course of his inventions and innovations.

The idea of ​​building a self-protection device came into the mind of young Litman when his wife was beaten in the streets of Pittsburgh. The young couple conversations about ways a woman could defend herself began to come up with an idea that eventually led to a small, portable tear gas dispenser. Litman began to test his ideas. His main challenge was that the chemical gas had an unintended effect on the person himself, and of course, the slow performance of the gas made it difficult to stop the attacker. He was therefore looking for a device that would work quickly and perfectly, while only targeting the attacker.

After testing many chemicals, such as sulfuric acid and kerosene, Alan and Doris eventually reached Chloroacetophenone, a chemical used by the US military during World War II as a very powerful tear gas. They named their invention device, TGASI, later renamed as Chemical Mace. The new name refers to very old (medieval) chemicals with similar effects on the person. Of course, Litman's invention reduced the horrible damage to some degree, and became a non-fatal and deterrent device. Alan Littman filed numerous patent applications for his spray tank, gas nozzle and chemical compound too. In 1964, he filed two new patent applications with the US Patent and Trademark Office, the combinations of which described a small bottle for spraying chemicals. These patents obtained patent certificates number US3258172 and US3258172 in 1966.

Over time, Chemical Mace has turned into a growing list of technologies for disarmament and combat purposes, only a few of which, such as pepper spray, are personal and non-fatal. Pepper spray contains the chemical "Capsaicin" (chili pepper) that causes severe burning sensation in one's face and eyes with tears flooding the eyes. Pepper spray causes temporary blindness and difficulty breathing which usually lasts between 30 minutes to an hour. There are, of course, other chemicals that work a little slower than pepper spray and cause some special pain in the mucous membranes of the mouth and eyes of the user.

All of these substances have one thing in common: "non-fatal pain and irritation caused by stimulation of one's sensory nerve receptors". In contrast, tear gas can be seen as an enhanced version of pepper spray that has far stronger effects. It affects almost all areas of the body, including the eyes, lungs, mouth and skin, causing pain, irritation, vomiting and temporary blindness.

Littman's invention had a lot of ups and downs in terms of commercialization. This unique innovation practically defined a dangerous and deadly chemical weapon in the category of civilian and safe products that did not violate US federal law because of not causing severe injury and death. Litman set up a company called General Ordnance Equipment Corporation laid upon the prototype of his innovative device. His first commercial product used hydrocarbon-soluble "Phenacyl Chloride" gas. Two years after, while Litman's patents were still being reviewed, he accepted a $ 100,000 bid from Smith & Wesson, a leading arms and ammunition manufacturer. The company targeted "private consumers" and "law enforcement" as two potential key markets for the product, and appointed Litman as its non-lethal weapons research director. 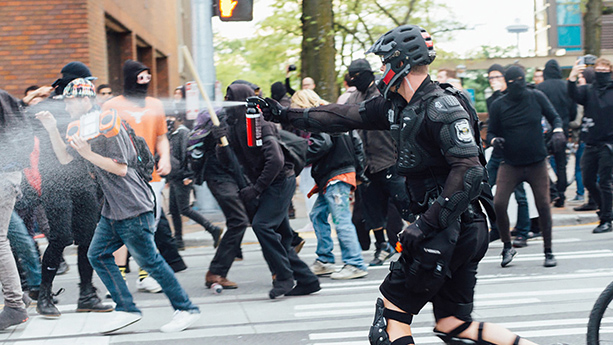 Mace's patent process was much more difficult than Litman had anticipated. On the one hand, the chemicals used by him had already been introduced and used by scientists and other researchers, so he failed to register a chemical compound for his invention. Finally, on 11 November 1969, he obtained the design patent number USD215934.

A key factor in the development and commercialization of tear spray was the unrest of the late 1960s in American cities that had driven people into the streets under the influence of racial inequality and the Vietnam War. In addition to the types of bulletproof vests, rifles and tear grenades used by police, an anti-riot group consisted of civilian volunteers equipped with Litman's innovative spray. Of course, this emerging technology and its use in street unrests caused controversy among American lawyers, and it was practically used experimentally. Even several medical studies were conducted in 1968 on the potential dangers of applying tear spray to people's health that showed some eye damage, allergic reactions, and long-term asthma attacks. No surprise that these disputes still continue after years!

Finally, let's not forget a former FBI employee in the 1980s who helped develop and convert pepper spray into an efficient weapon: Kamran Loghman, who served as chief executive of ZARC (a manufacturer of pepper spray for military and police forces) from 1988 to 2005, brought together a team of toxicologists, chemists and engineers and managed a series of technical projects from conceptualization to final product. He has registered numerous patents in the field of chemical formulations and pepper spray systems (such as USD469014, US6145654, and US7270802) and has provided extensive technical advice to the FBI in the study of chemicals.

He has also assisted France's GIAT (the world's largest manufacturer of military arsenals) and the US military, providing significant assistance in developing military systems and evaluating chemicals for insurgency control applications. However, following an incident at the University of California in 2011 in which police used chemical spray to disperse protesters, Loghman apologized for his technological efforts and inventions to develop tear spray in an interview with Times magazine: "Pepper spray is meant to prevent side effects. In recent decades, this tool has been partially abused. Pepper spray represents hope for law enforcement and the future, and should never be misused. The law enforcement culture needs to change."