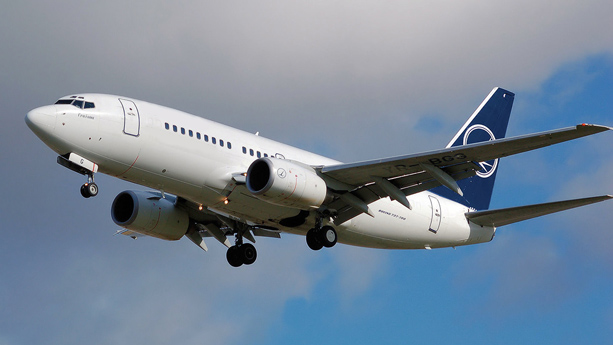 One of the mankind’s long-term ambitions has been flying in the sky. While, nowadays due to different existing methods such as international airlines, flying is a relatively usual activity, by the end of the 19th century, human flight was an inaccessible and exciting ambitious.

The airplane can be considered as a symbol of technological developments that revolutionized human life, especially in the field of transportation. This advanced device, named as “flying machine” with primary inventors, was developed and commercialized in a winding path filled with various obstacles. Actually, this achievement is owed to a continuous chain of innovative and highly risky efforts as well as specific political, economic and social conditions of World War I and years. After that.

The most well-known inventors and pioneers in the design and development of flying machines were Wright brothers, Orville and Wilbur Wright. While many people are recognizing this exciting invention as a lonely efforts of Wright brothers, however, the invention of the airplane has been the result of several years’ efforts by a large number of inventors, researchers, and flying enthusiasts. Each of these groups had a small or large contribution to the development of flying idea. What distinguished Wright brothers from the rest of inventors was filing the first patent application in this field. The patent surpassed the two brothers from other competitors. On March 23, 1903, they filed an application for their wing warping and rudder structure design in the US Patent and Trademark Office. The patent, titled "Flying Machine", was approved by USPTO’s examiners and granted under patent No. “US821393”. 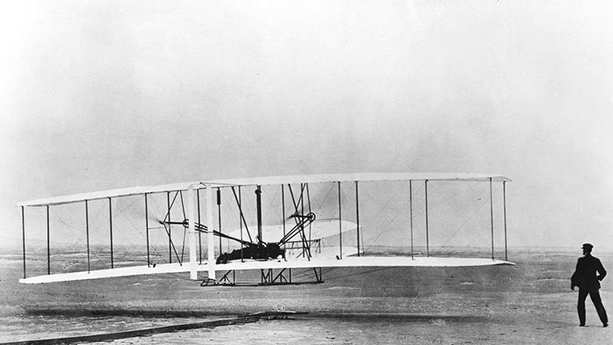 In the early years of developing and commercializing airplane, the government's role was extremely significant. In other words, the technological value of airplane as a strategic weapon, especially in the years leading up to World War II and disordering of technological resources for accelerating airplane development, required governments to come in, concentrate these resources and respond to the growing demand for this key product. From this point of view, from the creation of basic concepts to launch of a fully commercial and modern product, four completely different stages can be considered for the evolution and development of airplane. These stages are as follows:

At this moment of time, flying was a sweet dream. A small and growing community of enthusiasts, inventors, and eager engineers ware trying to know "how to fly". The interesting thing about this era was huge mechanical developments in the airplane field that without any limitation for copying these designs and innovations, anyone who interested in flying and had financial potential could be part of the flight community (developers and inventors of flying idea).

Francis Wenham and Lawrence Hargrave were two early pioneers and inventors who had serious presence in this. They tested their ideas and tried to improve their designs by learning from the results of their experiments. A key point in the early years of invention and development of airplane was the open collaboration between key players for evaluating the existed technologies. Most inventors shared their investigations result with the flight community, and as a result, the knowledge base was growing and expanding every day. Publication and share of experiences through a specialized journals, exhibitions and conferences, as well as numerous forums formed around the world, was examples of this technological collaboration.

A published book in 1894, titled “Progress in Flying Machines”, was one of the key efforts for gathering and promoting the flight knowledge. The book was wrote by a French writer, Octave Chanute, shared the most important experiences and collaborations until then. Chanute has extensive interactions with other inventors and scientists, including Orville and Wilbur Wright.

With considering IPRs, very few inventors had tendency to protect their achievements with some tools such as patents in this era and even those who did so, had no financial incentive. They only concerned about fame with publishing and disclosing their information and experiences.

2. The emergence of a new industry:

The spirit of collaboration between researchers and inventors continued until a new path has started due to increasing valuable progresses and possibility of flight.  Many idea owners, as soon as they realized that their invention might work, and it had potential for commercialization and monetization, changed their strategies. They combined the science-based approach with efforts for protecting their inventions. The Wright Brothers, for example, with filling their patent in 1903, withdrawing from the cooperative community and intensifying their efforts to obtain patent rights. In fact, the new manner was completely logical. In the early years of development, there was little commercialization potential, and everyone was working to realize this long-term human dream. The patent motive at the time was to gain fame or disclosure technical information and experiences, and with tangible improvements and the imminent commercialization of technology, technological collaboration replaced with the fierce competition. As a result of this new strategy, an unprecedented increase in the number of patents was happened. Actually, this new competition was a key factor in facilitating the path of technology development and commercialization.

In parallel with the Wright brothers' efforts, a German inventor, Hugo Junkers, worked on aerodynamic development of airplane’s bodies. He succeeded in developing an efficient and fully reliable flying machine and patented his invention in Germany in 1910. This patent was the prelude to the development of the next generation of airplanes. On January 26, 1911, Junkers filed a patent application entitled "Flying Machine" in the US Patent System and the patent was granted on October 20, 1914, with a patent number "US1114364."

A key subject during this period was the development of a secure, sustainable flying airplane that has seen in unprecedented increases of patent numbers in different countries. Countries such as the United States, England, France, and Germany have become pioneers in this field, and their inventors have patented different inventions about airplanes. Interestingly, in many of these patents’ approach, inventors had also overseas IP strategies that shows their plan for commercializing their patents as a global technology. 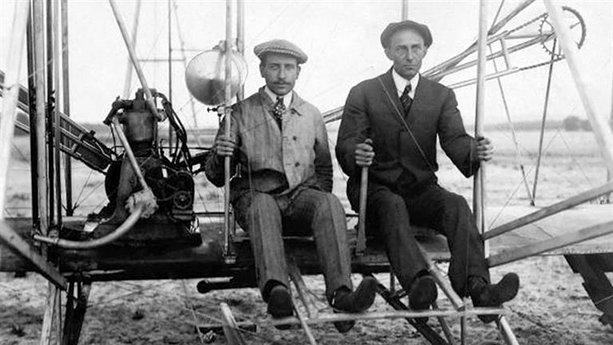 With increasing of patent applications, investments in this sector have also increased. Investors became familiar with the real potentials of the aviation industry and launched numerous companies in the field. The most famous of these was the Wright Company, founded in 1909 by the Wright brothers. Actually, the largest applicants in this era were the governments, and over the 200 prototypes made between 1903 and 1913, a few numbers reached the final stage of production, often based on governmental orders.

Benoist XIV may be the world's first passenger airplane. The airplane, known as the "Lark of Duluth", was built in 1913 in the United States for the purpose of carrying passengers. The only passenger of this airplane should sat in the cockpit. Percival Fansler, a business consultant, with Thomas W. Benoist, set up an air service between St. Petersburg and Tampa (two cities in Florida) and used two samples of this airplane in this airline. The first flight was in January 1, 1914, with Tony Jannus piloting and a former St. Petersburg mayor named Abram Pheil as a passenger.

3. World War I and years after that:

During World War I, key inventions in the aviation industry, particularly the patents of Wright brothers in the US and the Junkers in Germany, came under the control of two countries’ governments. There were three main reasons for this phenomenon. The most important parameter was attentions to the airplane as a strategic weapon. Considerably, airplanes were important tools that could change the victor of war. On the other hand, the acceleration of development processes and improvement of technologies depended on integration of scarce resources that could only be achieved by powerful players such as the governments. The third reason was the countries' fierce competition for pioneering in the aerospace industry, specifically followed by Germany and the United States.

Interestingly, in the US and during World War I, European-made airplanes were used by the US government due to wide ranges of patents granted to the Wright brothers. This led the US government to establish the Manufacturers’ Aircraft Association (MAA) in 1917. It focused on commercialization and development of airplanes and for accomplishing this goal, prioritized on patent licensing. The same manner was considered in Germany and in the years leading up to World War II, Nazi leaders forced Junkers, as the pioneer of German inventors in the aerospace industry, to license his patents to produce better airplanes.

4. The aerospace industry in recent decades:

In recent decades, the aerospace industry, especially in the civilian and passenger sectors, has been changing dramatically. Changes in different generations of airplanes have raised the safety factor and reduced the number of accidents notably. Actually, aerospace industry’s standards have significantly improved in comparison with industry emergence and government competition periodic times.

Since the world wars and significant governments’ investments for developing new fighter models of airplanes, the airline industry has clearly been on the progress path. With the end of World War II and start of rebuilding war’s ruins, the state's interventionist role in the aerospace industry has diminished to some extent, but the presence of the states was still more noticeable than in the early years of generation.

Another notable trend in the aviation industry, especially in the late decades of the 20th century, was the emergence of two global aerospace giants, Airbus and Boeing. Due to intense competitions these companies have facilitated technological progresses for conquering global markets. In recent years, because of considerable potentials for commercializing aerospace technologies, patent filing has been booming again, similar to industry emergence periodic time. However, there is a very important difference between these stages. During the industry’s advent, partnerships diminished and replaced with extreme competition and this competition was the most important reason for filing patents. Unlike that time, aviation technologies are becoming highly sophisticated that each item is protecting with several different patents. Obviously, in such a highly complex ecosystem, the integration of different technologies into a final product will require a new form of technological collaboration. These partnerships have been taking place in the form of patent licenses. Various players have been involving in patent licensing agreements as well as fierce competition and active involvement in patent registration and publication.

Serious approach for this industry’s players for patenting their innovations is well illustrated in Boeing's efforts. This company obtained 1177 US patents in 2017. In addition, Boeing ranked 23rd in the top patent holders in the United States in 2018 with 1227 granted patents.