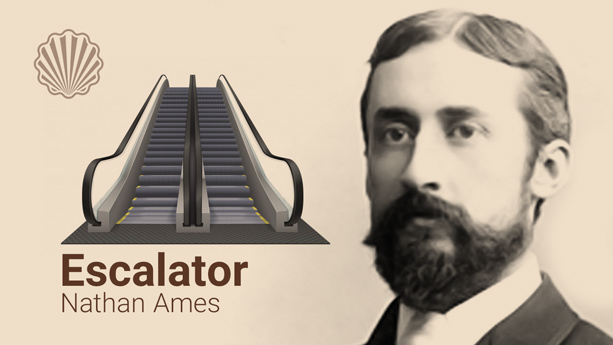 You may have ridden on escalators during passaging in the shopping centers and even in the subways. This unique innovation, along with elevators, made it impossible to move people in large, multi-story buildings. Escalators are basically just long conveyor belts. They have rotating chains that pull a set of stairs in a constant cycle, creating a moving staircase. However, today, in some shopping malls, there is also some kind of completely horizontal or modest sloping moving surface that facilitates the movement of people.

The most important thing about the evolution of the idea of ​​the escalator was that the invention manufactured not to be as a means of transportation, but as a form of entertainment! Today, that old entertainment has become one of the integral components of many places.

The first attempt to invent the escalator was made by Nathan Ames of Massachusetts, USA. That invented escalator worked with a steam engine.

In 1859, he invented something, called "Revolving Stairs", enshrined in history as US patent number 25,076, and generally acknowledged as the world's first escalator. The device was never manufactured, and with the death of Nathan Ames in 1860, the invention was virtually forgotten.

But in the late 19th  century, a man named Jesse Wilford Reno started to develop and invent escalators. He designed and produced a device called the "inclined elevator". 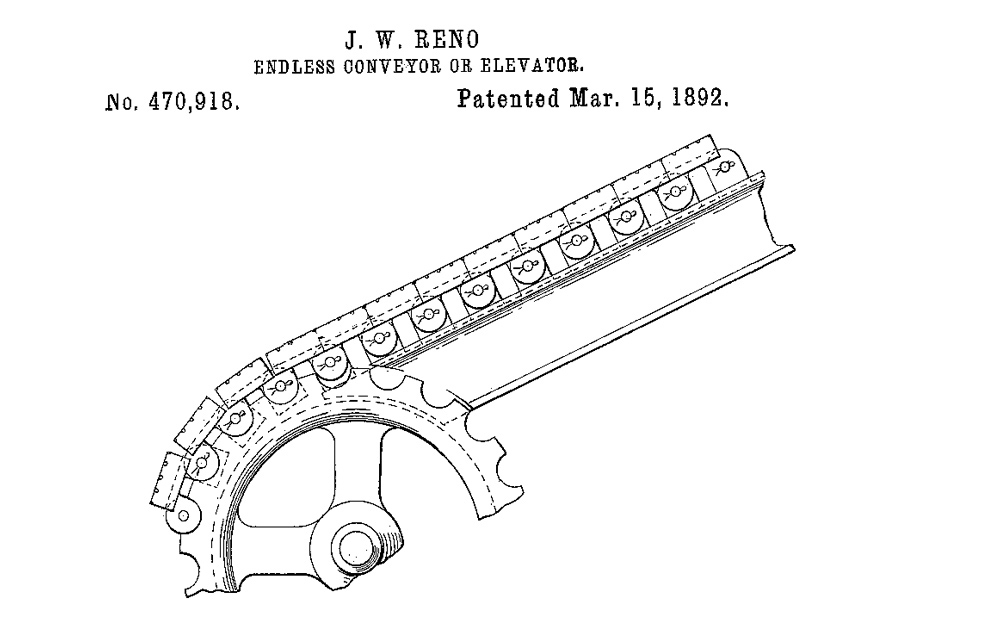 The device that elevated passengers on at a 25-degree angle, completely derived from the design of the recent "Reno" patent.

Since 1897, Charles Seeberger was an inventor whose patented idea, contributed to the development of the modern escalator.

George H. Wheeler patented a moving stairway with a moving handrail and flat steps that allowed people to move between floors. Charles D. Seeberger bought Wheeler’s patent in 1898 and went to work at the Otis Elevator Company developing the first step-type moving stairway.

Seeberger created the name “escalator”, from the word scala (Latin for steps), and the word elevator  And he actually made an invention that was designed previously by Wilford Renault and much earlier, by Nathan Ames.

Seeberger in collaboration with the Otis Elevator Co., designed and produce the first commercial escalator in 1899 at the Otis factory in New York. A year later, the Seeberger-Otis wooden escalator won the first prize at the Paris Exposition which played an important role in recognizing this valuable innovation.

Along with Seeberger's efforts, the success of the Wilford Reno device and his familiarity with its device's deficiency made him the top escalator designer at the time. He started the Reno Electric Stairways and Conveyors Co. in 1902.

Seeberger sold his escalator patent rights in 1910 to Otis Elevator, which bought Reno's patent a year later and the company became a major player in the design, production, and development of the escalator.

Between 1900 and 1920, Otis Elevator installed some 350 units, built-in its factories, mainly at department stores and public transport institutions.

One of the key players in the development and improvement of escalators in the 1980s was a man named David Lindquist who was in charge of Otis Elevator's engineers. he and his colleagues combined and improved the Jesse Reno and Charles Seeberger escalator designs, but in 1950, Otis lost the trademark when the U.S. Patent Office ruled that even Otis had used escalator as a generic descriptive term in its own patents.

In the 1930s, "Mitsubishi Electric" entered into the design and manufacturing of escalators business and began installing its devices in major Japanese stores. With constant innovations, the company has transformed itself into the industry's leading player, which can be seen in the design, manufacture, and installation of unique escalators at the "Forum Shops" store in Las Vegas, USA.

The last decades of the 20th century can be seen as a time of widespread use of escalators.  Nowadays, elevators are very common in places where elevators (such as many stores, shopping malls, airports, public transport systems, hotels, and even sports stadiums) are not available due to space constraints or the density of people.

The key point is the possibility of installing escalators in a space similar to regular stairs, and on the other hand, users will not have to wait so long to use the elevators. In recent years, the path of development and evolution of escalators has been devoted to considerations of safety.

The addition of fire extinguishing system to the exterior and to underside equipment, the ability to automatically control and stop the emergency escalator, as well as the ability to control and disperse internal dust to extend the life of the device, are some of the innovations that can be mentioned.